Decent conditions for the day, if still unseasonably cold – I was still wearing the 6 layers I was wearing on the first outing of the season!  A light breeze and a ceiling encouraged me to start on dries.  John Gibson and I simply started out from the harbour and let the light westerly take us along the south shore towards the dam.  Well, nothing much to report there, so we tried the north shore drift.  Same result.  I put the second rod up with washing line stuff (my casting arm is knacked and I can’t pull to save myself these days!).  John was trying a few different ideas as well.  With nothing forthcoming at the dam end, we went up to the west end.  Typically, on days of light winds, the wind at the west end was all over the place.

We came back down and tried in along the south shore between the island and the harbour.  This was where we found fish.  John got tuned-in with a goldhead hare’s ear nymph of his own design, slow-fished on full floater.  I could see the way it was working, when casting towards the shore, when close-in.  I was the outside rod and was struggling to get the presentation right with my slow glass set-up.  I was also having a disaster of a day in terms of conversion rate!  I had a couple of fish on trad wets, but wasn’t getting to grips with it.  I accepted John’s kind offer of one of his hare’s ears, and it caught me a couple of fish!

My boat partner for the day was another new member, Darrel Young, and I thought that we’d start at the top end of the loch, where we normally see a few fish.  After about an hour without seeing anything and being blown all over the place, facing one way and then being turned in the opposite direction, we decided to move down to where the burn runs in at the bend.  But guess what: it was just as bad there.

Moved to the other side, just above the small island, and eventually managed to settle down into some kind of drift along the shore.  I was fishing a fast glass with a cast of blue holo beaded damsel, cormorant and hopper on the dropper.  Darrell was on a Di-3 sweep line, damsel on the tail and a hopper and small all-black cormorant.

First fish came to me on the damsel and then a small brownie, but from that moment on, most of the fish came to Darrell, who I was managing to keep close in to the shore.  The fish were all within 3 to 4 feet of the shore.

We didn’t see much moving until later in the day, when a small hatch of what looked like buzzers appeared.  Darrel had a great brownie of about 3½ lbs in his 4 brownies and 12 rainbows.  These were mainly to the damsel, with a few to the cormorant and hopper.  I managed 8 rainbows: again mainly to the damsel.

It seemed like a tough day, but the overall boat catch was very respectable.

Dougie Goddard and I started a drift just in front of the boats, heading towards the dam.  We both set up with SSI lines and washing-line set-ups.  There were already a team of bank anglers working the shoreline, so our drift only covered the first bay.  However, I managed to pick up a fish early to a small olive nymph and Dougie hooked and dropped a fish.  A promising start!  The swirling wind was a problem for us and we could not quite manage to engineer the ideal drift.  We pushed right back to the small island and we could see a few of our boats doing similar.  I picked up another to a claret cormorant, not a big fish but it managed to straighten the hook, which is always a shame.  My 7-wt rod may be a bit too agricultural!

We fished the south shore predominantly, before heading towards the dam.  Dougie was by this time getting some action to a little red Diawl Bach booby, while I was picking up fish predominately to the brighter stuff.  We were also getting pestered by the gulls nesting around the dam wall – dive‑bombing our flies… until the inevitable: a gull engulfed one of my flies!  A first for me.  After a bit of an aerial dog-fight, and a bit of excitement, the bird was released… much to our relief!

Another interesting day’s fishing and we ended with 13 to the boat. 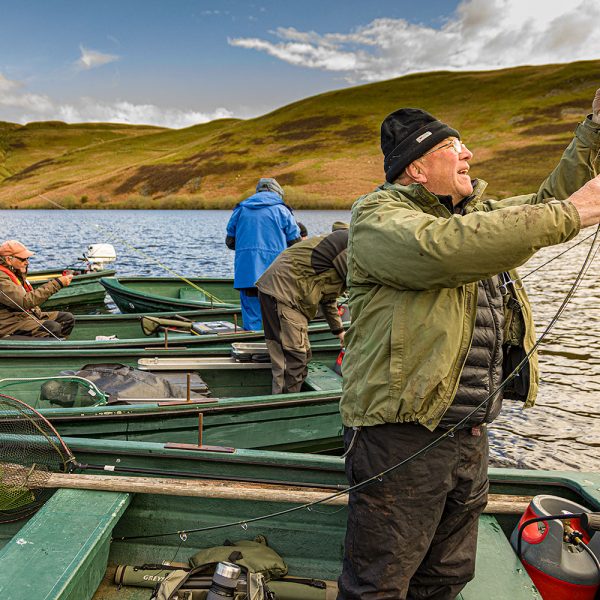 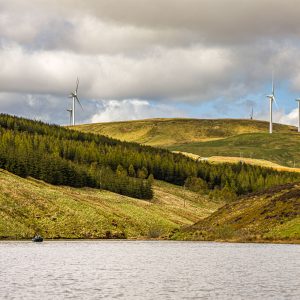 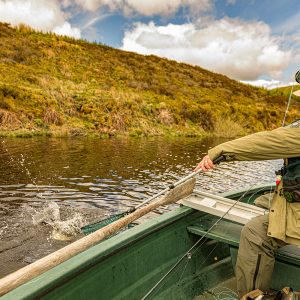 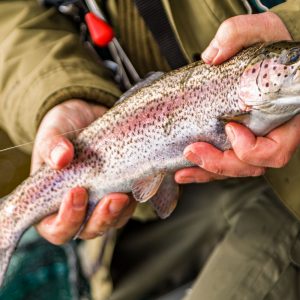 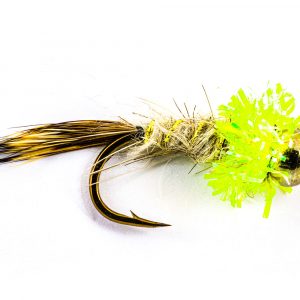 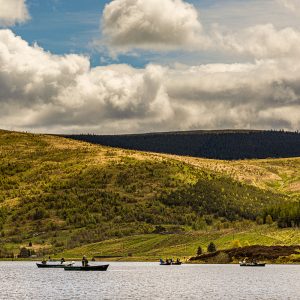 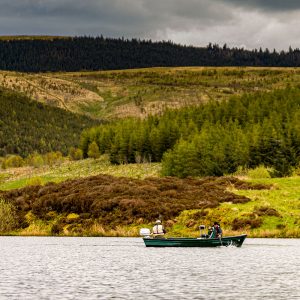 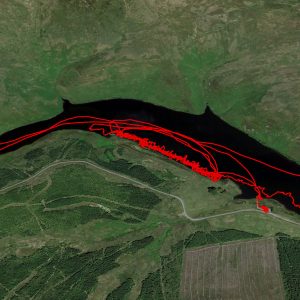