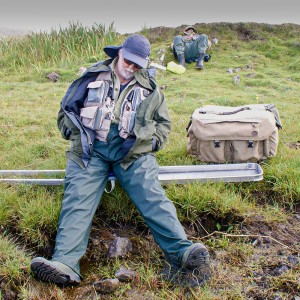 The first time I caught a fish on a hook was on a family holiday to Islay. It must have been the early 1960s. We stayed in Port Ellen, in the White Hart Hotel, which is still there. I spent my holiday money on an orange nylon hand-line, complete with wire paternosters, and a circular grip lead on the end. I then spent almost the entire holiday standing on the dockside, trying to catch small saithe on bits of shellfish, collected from the rock pools. Occasionally a very large fish would lazily swim past. I was desperate keen to have one of them take my bait, though if one had, it probably would have pulled me in to the harbour. I never found out what they were, though I’ve always suspected they were tope.

My introduction to fly fishing came of all places, on Loch Leven. Fishing in the blood skipped two generations in our family. My father was a golfer, and his father a gardener. It was my father’s maternal grandfather, Grandpa Moyes, who was the fisherman in the family. I’m unsure if he fly-fished, though I was often told stories of how he held the worm in his lips while he readied the Thomson tackle. Grandpa Moyes had seven daughters, one of whom, Alexis, married Alec from Acharacle. (Alec had a brother, called Big Alec.) Uncle Alec and Alexis had a son… Sandy! Uncle Alec was a fisherman, and he and his pal, ‘Pop’ Bridie, were great Leven fishers in the 50s and 60s.

Back then, the boats didn’t have outboard motors and it took two young, fit men to row them. The two young, fit men of choice for Alec and Pop Bridie were Sandy and my dad. One day, dad took me with him. They allowed me to hang a team of flies out the back of the boat when the Leven boatmen weren’t likely to see. I remember catching a dustbin lid-sized perch, which I insisted on bringing home to show to mum. I got to go again, regularly, and was soon casting, and catching an occasional trout. The rest is history.

Photography came much, much later, as a result of starting the club outing reports in 2001 – just as digital cameras were coming on the scene. Digital has taken over and now everyone is a photographer. That pushes the bar higher for enthusiasts, semi-professionals and professionals alike – which is a good thing.