Last outing of the season for us!  It’s gone quickly – very quickly!

First couple of hours were mirror calm.  I started on dries, while john Gibson was on a washing line set-up, on a midge-tip with a couple of spiders on the droppers.

Loads of risers off Shear Point.  Several boats throwing dries at them, but no one making anything of them.  Me included.  I’m watching them.  Dead slow… tails showing… dorsals showing, subsurface swirls… But never seeing a mouth open above surface.  Surface clean as a whistle.  Thinking phantom larvae… Some fish being caught by twiddlers and pullers.  Tried changes to dries.  Closest I got was with a small suspender on the tail.  That got 2 or 3 looks, but no cigar.  John had follows but no takes.  I thought, if they are on phantoms, just leave them and look elsewhere…

Took a look down at Tod Hole.  Seemed dead.  Came round by the butts – all looking dead.  Went round Arnmach, swung round by Sandy Bay… all dead-looking.  Tried in at the plantation.  We each moved one with no takes.  Breeze getting going from the west by now.  I put up the nymphing rod with 10 ft fast tip and a washing-line rig.  Moved one with no contact there.  Went across to the run down the reeds, north side of Dog Isle.  Caught the first of the day there on a mini-cat booby on the tail.  Carried on down and caught the second on a Daiwl Bach.

Breeze growing stronger, so tried getting onto the crease line behind Stable Point, as we went down further.  We both had a couple of chances without connecting there.  Went on down to the Rookery.  Breeze increasing all the while.  Decided to knock the nymphing on the head and just have a good old-fashioned pull with trads.  Put up a 3rd rod!  My favourite pulling line, the Airflo ‘Sixth Sense’ Fast Glass, with an Orkneyfied WOIGO on the bob, claret dabbler on the middle and a black and gold minilure on the tail.

Worked round by Sam’s Point and I said to John, “Let’s have a go at the shallow markers, coz Jimmy and I found fish there the last time we were out.”  So, I lined up for a run down the inside buoy.  Bingo!  A 5-pounder wellied the WOIGO.  Ripped the whole line and 20 yards of backing off me!  After getting sorted from that one, I was looking over towards where we had been among the risers in the morning.  I saw 3 or 4 boats over there, on the shoulder between Shear Point and International Bay.  I was keeping in mind those fish might now be getting caught by other means.  I looked across again a wee while later, and did a double-take!  The 3 or 4 boats had become 10 or 11!  Must be something happening!  We went across and lined-up to come down the line.  Sure enough, I caught a fish on the claret dabbler.  Repeated the drift… next time down and I caught one on the minilure.  I lost the WOIGO on the bob to a rip-off, mid-fight!  Retied dropper with a fresh WOIGO.

And then it was like someone turned the switch off.  Nothing, nothing, nothing.  The 10 or 11 boats doing the drift became 9, 8, 7 , 6, 5, 4… we came to the conclusion we had caught the tail end of some action… and it was obvious the constant repeating of the drift had got their tin helmets on.

We tried working right, down the road shore.  We had seen there were several boats working all along towards Kate’s Brae.  But we had no sooner started but all the boats moved away, leaving the entire road shore boat-free!  We took that as a clue!  So, we went back the other way.  Three-thirtiesh by now…  Had another go at the shallow markers, with no interest.  We were counting the boats on the beach and seeing that about half had packed-in.  It was getting blowy, right enough – not the conditions the twiddlers like.  But good enough for pulling… if there was anything happening, but it seemed there wasn’t.  We were due in for 5 anyway, so as to get up to Poppies in good time.  Back of four-ish, we decided to give it one last drift, back over at Shear Point.  Blow me, but out of the blue I hooked one on the fresh WOIGO.  We had been fishing with the drogue out, due to the stiff breeze.  All the fish had been supercharged, and this one was no different.  It got round the back of the boat and got itself into the pocket between outboard and drogue rope.  I am well-acquainted with the situation!!!  A hard slog ensued, trying to dig it out of the pocket.  It was not for coming.  Jeezo… this went on and on and on…  I’m levering it as much as I can and it’s just not coming.  And eventually, I just wore the hook-hold out, and it fell off!

It was a tough day, but some of the others found it even tougher.  The Club’s 13 rods landed 21 fish.

b) suspend a ‘cat bug’ (Google it) 4 feet under a bung at Gateside.

Another interesting input from a good friend who was out – he found fry-bashing fish at the point of Arnmach that saved his day. He got into them on lures.

We retired to Poppies for light refreshments and the usual cracking good meal. 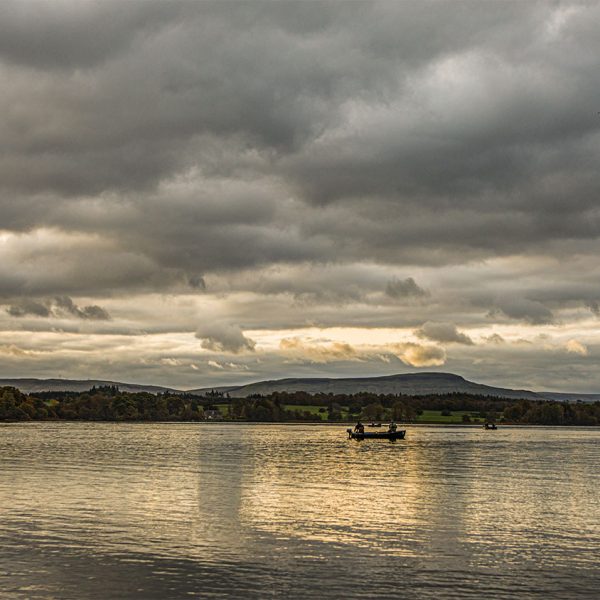 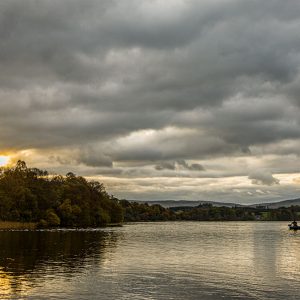 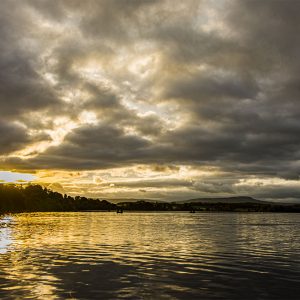 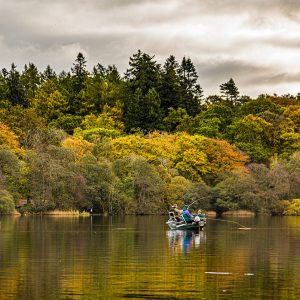 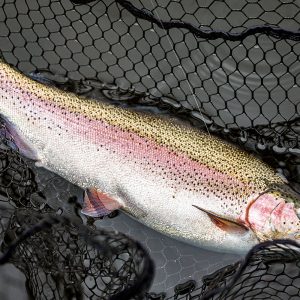 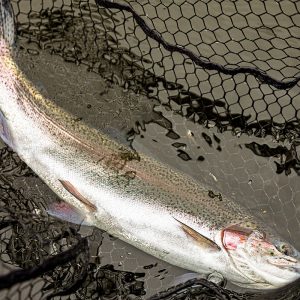 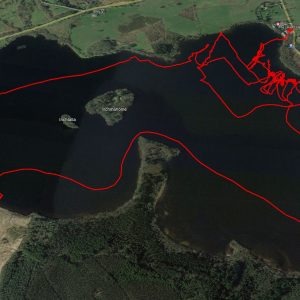