Due to a late call off, the day started by requiring some chemical 1,2-shifts in terms of boat partners resulting in a new pairing of Dougie Skedd and myself heading out in boat 11.  We set out on an easterly course, heading straight for the dam wall.  There was little wind and a small ripple with little sign of anything moving as we made our way out.  Just before reaching the dam we saw Colin already wrestling with a trout from his first cast and before we could get ourselves into position up at the dam wall Colin was again tussling with a second trout after only as many casts.  Things were immediately looking promising.  There was a slight chill in the air, but a quick finger in the water suggested the water was still reasonably warm.  (The water was 16.5 C and the air 16 C.  Ed.)

I had decided to start on a washing line using a 3ft midge-tip with a small black booby on point and a green holographic Diawl Bach and a Kate McLaren snatcher.  Dougie was on the dries.  Before we could get ourselves comfortable and almost immediately after Dougie’s first cast hit the water he was similarly into tussling with a rainbow but unfortunately he dropped it, probably more out of surprise than anything else.  An even more promising day looked on the cards.  Alas, I failed to continue the pattern of first cast success, but my enthusiasm remained.  The wind was swirling in the corner up against the dam wall, so we positioned ourselves alongside the water run-off tower for a drift down the north shore.

Early in the drift Dougie was consistently moving fish with his dries and quickly netted the first of the day to a black foam beetle.  I had 1 or 2 offers but failed to hook up.  We realised that the early interest being shown on the drift had now started to wane as we continued our drift down towards a point almost opposite the pier on the south shore.  We decided to return to chase the fish we had left behind us.  Dougie continued to move fish and quickly had another to the beetle.  With little to target, the offers were coming out of the blue and the fish were taking the beetle firmly and cleanly, unlike the ethereal comments ringing out from other boats around us complaining about the half-hearted takes on offer and failure to hook up.

I continued with my washing line with little success and slowly working my way through most of the flies in the box.  We repeated the drift from the water tower several times, but moving away from the north shore and more out to the middle water, where we were consistently over fish.  Dougie soon had netted 4 rainbows to the foam beetle and I eventually got a rainbow in the boat to a Kate McLaren snatcher.  Seeing Dougie’s success with the dries, I decided to switch to dries but I couldn’t even move a fish, never mind hook up with one.  Unfortunately, this pattern with dries continued for me throughout the day.  After lunch, the action had notably started to slow and Dougie had the big decision on whether to substitute the beetle for something else and try to liven things up a bit.  A ginger hopper was duly presented and interest returned, the only difference being that the takes were a little more splashy and half-hearted.  I returned to the original washing line and by mid afternoon Dougie had a further 2 trout to the ginger hopper and I had managed to land a further 2 rainbows; 1 to an olive hopper and 1 to a small black booby with green holographic rib.

Dougie then made another late substitution and landed another rainbow to a red Klinkhamer.  At this stage, we had 10 to the boat and we thought the fish had perhaps just dropped slightly in the water.  I switched to a longer 6ft midge tip washing line set up and immediately started to get a lot more action, netting a further 2 rainbows with a late flurry before the end of play.  This gave us a total of 12 to the boat.  A good day with both dries and washing line methods yielding fish.

The Club’s 11 rods caught 45 fish, mostly on dries.  Ken was pleased to hear this, as the fish had been lying 70 feet down until recently. 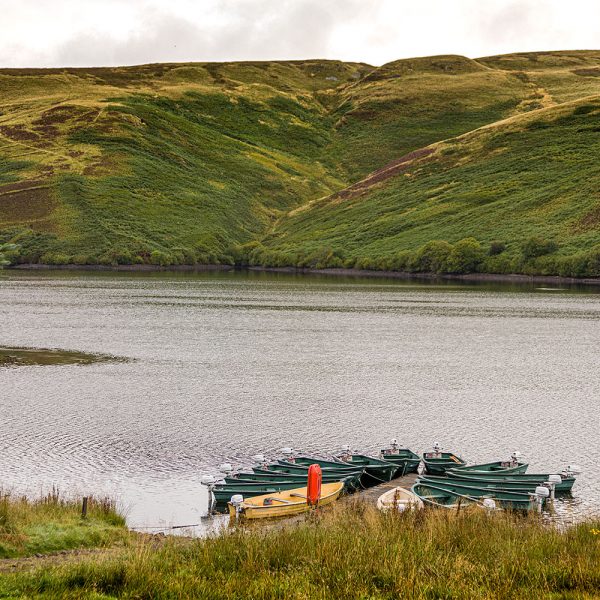 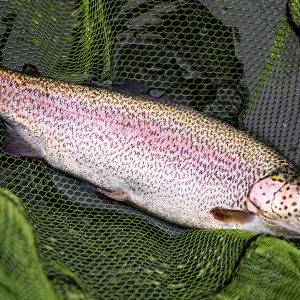 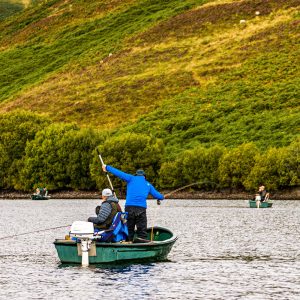 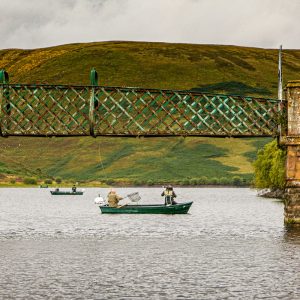 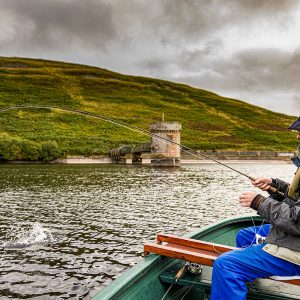 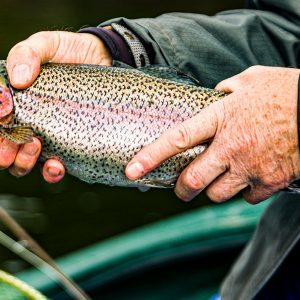 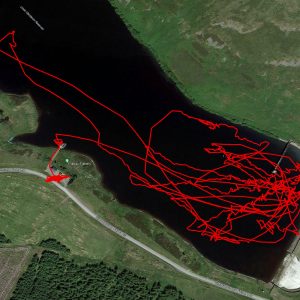