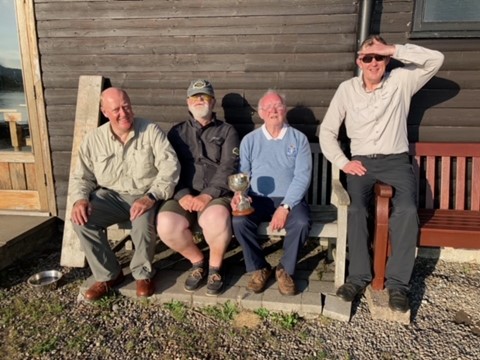 It was a very pleasant start to the day at the Lake, overcast with a gentle breeze.  Reports were suggesting that as the water slowly cools the fish were now more spread-out and Hotel Bay all the way to Lochend had fished well the previous day, with the Cages once again a hot spot.  Our team tactician decided (and I was not going to argue) that we should split resources to cover more water.  Jimmy and Alan headed down towards Lochend, while Dougie and I motored up towards the Malling Shore.  As what seems like normal these days, there were very few fish showing, other than the usual early morning feeders in and around Hotel Bay and off of Shear Point, where a few boats were already working.  Many of the boats headed straight into Cages.  Dougie was keen to give the deeper water a go at some stage, having acquired a few of Darrel’s secret weapons.  There were a couple of boats working around Dog Isle but by now the wind had almost completely disappeared.  An occasional fish moved, but a few and a long time in between.

We both initially set-up on washing line tactics and slow F-of-8 retrieve, with mini-tip lines.  We picked up a few fish, but without setting the heather on fire.  The odd rod was bending around us, so we thought we would persist in this area for a while.  By now we had pushed all the way back to the shore and we set-up to drift out towards Dog Isle.  By now Dougie had changed to dries (a couple of nice Klinkhamer patterns).  After what seemed like an eternity with no further action, Dougie had a real purple patch on the dries with fish coming blind.  There were no fish to cover and not enough wind to drift the water properly, but Dougie was getting enough interest.  By now we had landed 5 fish each, which we thought might be a reasonable return.  However, given Dougie’s success, I followed his lead to the dries, despite the conditions getting brighter and warmer by the minute.

We decided to have a bash at the Rookery, where a slow drift proved fruitless although we both moved a couple of fish.  We bumped into Jimmy and Alan and they were having a similar experience.  I eventually picked up one to the dries, but periods of inactivity were getting longer.  We decided to move back towards Plantation and Sandy Bay, where the conditions looked perfect for the dries… if only the fish felt the same.  In that whole expanse we never saw one fish move!  We eventually headed back around Stable Point, where boats were persistently hanging about.  We had a number of fresh-air shots, but it was tough going.  We saw a few shield bugs, apparently of the forest variety, and assumed that the odd spectacular rise was a result.  I then had a good little spell on the dries at probably the least likely time, what with the sun splitting the stones.  Dougie gave it a go on the fast sinker with Darrel’s special, but to no avail.  We had an enjoyable if tough day and ended with 15 fish to our boat.  I was thankful for my sun factor 50 and plenty bottles of water.  Dougie managed fine without either!

Conditions were overcast with barely any breeze and Jimmy and I headed to Lochend.  No sign of any fish moving there, but plenty of activity from a group of holiday makers on floats and boats.  Jimmy started pulling with a midge tip and I went for dries.  Nothing doing, so made our way back along the shore line of Lochend Bay, then went across to the Road Shore and International Bay.  Couple of fish picked up on dries as we moved across Shear Point.  Then fished between the buoys off Sam’s Point with dries and pulling and I picked up 3 on a floating fry pattern, whilst Jimmy got fish on a black nymph and Yellow Owl.  Stayed in this area for a while before trying the Rookery and then Gateside Bay, where I had the Hi D on, and finally to Hotel Bay.  Although we had a few further fish on, they dropped off quickly after hook up.  No further fish landed in the latter part of the day and our boat finished with 9. Not an easy day by any means.