I think a few of us must have been bad in our youth. Why?  Because the weather was if anything worse, for fishing, than any other time this year. When we arrived at Carron, the water was spilling over the dam in waves and the water on the reservoir side of the dam was chaotic. Reflected waves from the dam were piling up and it would have been very dangerous to put a boat anywhere between the boat dock and the dam.  Looking west, we could see white horses tumbling down the loch. Therefore, the west end was the place to be, if you could get there. It looked like it would be possible by motoring, slowly, up the north side and passing between the shore and gull island. However, four of our happy band decided that discretion was the better part of valour and opted to go home.  It transpired that this would have been best bet for us all.

Jimmy McBride and I were sharing a boat, and Jimmy had volunteered that I should be the driver, so we set-off, heading up the north shore. We did have some spray coming over the bow, and at times, we had a couple of inches of water in the bottom of the boat. However, it was not too bad and we eventually arrived at One Tree Bay – this was on the advice of Jimmy Coyne, so what could go wrong?  Well, nothing went wrong but we only caught one small brownie. We then headed for the west dam and drifting east along the north shore.  Again we got nothing other than the odd tug, but nothing stuck. We then tried the same drift but along the south shore, and this is when I made my mistake. I suggested to Jimmy that if we were to stop now I would have out fished him for the first time. I am unsure what happened, but immediately he landed three small browns. ‘Drat’, thought I.  Why did I not keep my mouth shut?  We then moved to the south shore, but just above One Tree Bay and Jimmy was into a fish, a fine rainbow this time. We spent the remainder of the day fishing this area and Jimmy ended up landing four rainbows.

Jimmy had his fish on an orange sparkler, size 12.  He used a DI-5 pulled quite slowly.

Another person to do well (compared to the rest of us) was Dougie Skedd, he landed two nice browns and one rainbow. Dougie used a Hi-D coupled with a Clan Chief, pulled quite fast.

Derek Kilgour landed a good blue. He used a Di-7 and a Carron Rabbit (have never heard of a Carron Rabbit) and his boat partner Alan Brown also had a rainbow. He used a sinking line and a cat’s whisker fished slowly.

When we came off the water, the consensus was that fishing in such conditions was not the best way to spend one’s time – it made gardening sound a quite attractive proposition.

Mind you, the day was not all bad – we did see an Osprey take a fish, then shudder as it dried its wings.

The nine members who went out caught ten fish – a rod average of 1.1.

Now it is Frandy next. All we need is gale of wind howling from the east and Carron may have been a good day – we will see you at Frandy on Saturday 30th May. 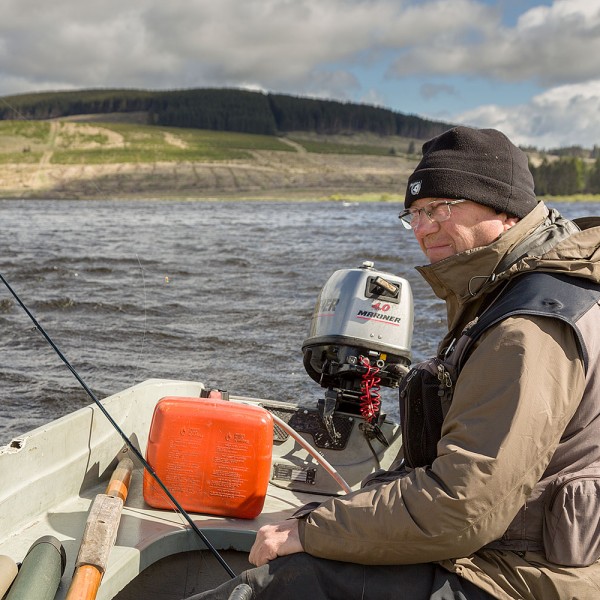 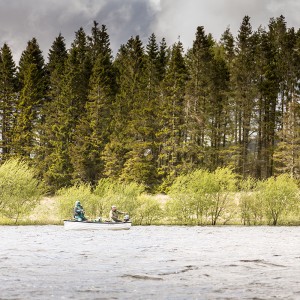