Will the weather ever get better this year? When we arrived at Glencorse, it was quite nice, the wind was gentle from the west and fish were rising in boat bay. Bob Whyte and I were blethering and decided that we were going to try dries up at the west end of the loch and this would give us long drifts down to boat bay. What could be better?   Having tied on dries and set off I was half way up the loch when the wind got up and up again, my 36 pound thrust motor could make very little headway, but being an idiot I struggled on and after a bit the wind dropped to just very strong. Ahead of me I saw Hugh Thomson play and land a big fish, I would think about five or six pounds, he then carefully returned it to the water.   This gave me hope that the decision to fish the west end was correct – I did try the dries for a while but it dawned on me that dries were not the sensible choice, so on went an intermediate and a single size 12 white cat with a red underwing. Drifting over the area that Hugh had landed his big fish I had a tug and the fish was on, this turned out to be a fish of about four pounds, which I returned and then motored round to drift the area again. I did this a few times and as I started my third drift, I got a second fish that was also about four pounds. Big fish that I would have liked to get on dries.   This is when the heavens opened, the hailstones driven by the wind that had sprung up started to churn the water into foam and even with a drogue out I went scudding down the loch. Ahead I could see no other boats so assumed they were sheltering in boat bay. Having made a few half-hearted attempts at casting I gave up, had a cup of tea, and waited for the weather to improve. By this time, it was about eleven o’clock; I moved to the north shore and drifted all the way to the causeway, nothing. I then moved to the south shore and drifted that, nothing. I then joined the rest of the boys in boat bay, where I did get one pull, and for me that was it. In boat bay, we had high winds, sunny spells and heavy rain. One of the sunny spells took place just after four o’clock and this had almost dried us out, but we all could see another strong squall coming in from the west so most of us headed for dry land to try and avoid it.  Most of us failed and had another soaking before we could unload the boats and get our gear stowed away.

Nineteen of us fished that day. However, with the air temperature being 8.5oC and the water at 9.5oC coupled with a very blustery wind and rain the fish were just not in the mood to grab flies.

The club only netted thirty-six fish, giving us a rod average of 1.9.  Not good, but not bad in the conditions.

The fish caught were mostly big fish, three or four pounds, and a few were even bigger. There was no pattern to the flies or method, anything from a floater and GRHE to a DI3 and black tadpoles. Tom Steven had four fish, two of which were in the six/seven pound range. Bob Whyte, Bryan Griffith and Ian GA Macdonald also had four; Ian was a joy to watch in the high wind. He had bought an electric outboard powered by lithium cells, producing 3.5 HP.  It was a joy to see him zoom about coping no bother with the high wind. On slow, sunny days, that motor could be used to water-ski. It was surprising that such a high-powered motor could run for so long on the small and lightweight batteries. I suspect Ian’s outboard and batteries are the future for us all – when the initial cost comes down a good bit!

With luck Carron on Sunday 24th May will be a better day – see you then – Ed. 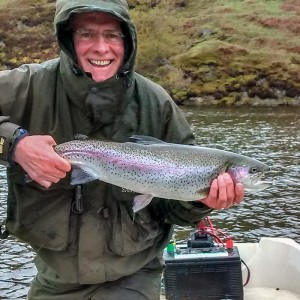