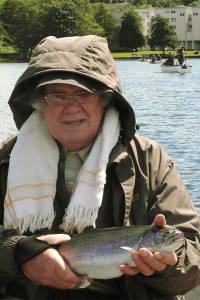 Following on from the clubs last, rather poor, outing to Menteith on 22nd June, we thought that two poor outings in a row would not be on the cards – but unfortunately, Linlithgow was not much better.  It must be the weather. With a water temperature of 18°C and the air, being only 14 when we started any sensible person would have put on a DI6 and a few boobies. Eric Singer and I were fishing together and knowing we should fish deep we both put on floaters and buzzers. Then we spent most of the morning putting the world to right and discussing how Scotland would be after the vote.  We drank tea and munched Eric’s biscuits, which were nice.  Then Eric, still fishing his buzzers very slowly, had a fish, a strong one of about three pounds.  Seeing Eric catch on buzzers, I stuck with them for a while, about three minutes, then I changed to a DI4 and a single size 14 yellow dancer.  This got me a fish on my second cast.  Unfortunately, it was released at long range.  I remember saying, “Oh, that is a shame.”  A few casts later I had another, which I managed to get into the net.  After that, we were harassed by a pair of louts in a sailing boat.  I asked them to show a bit of consideration, but being louts they then seemed to enjoy upsetting everyone they could.  After a while, we moved closer to the palace and on my last cast before stopping, I had a second fish to my single yellow dancer.

Robert Wallace was fishing with Bryan Griffiths – Robert fished an intermediate line and a damsel this got him a very creditable three fish. Bryan fished a DI5 and landed one fish, caught on a black snatcher.

Ken Hastings had a nice blue of about four pounds – he used a floater and a shellback diawl bach.  Using the same tactics John Levy also had a fish. Our best rod on the day was Derek Kilgour – he used a DI7 and two boobies, a black one and an orange one. This got him five fish. Our 13 rods only landed 15 fish – a rod average of 1.15 – better days will come along.