Another interesting day – not unlike the one at Frandy last week.  The forecast was for heavy rain, possibly even thunderstorms, but the unusually warm easterly breeze kept the worst of it at arms length.  What we had was everything from a mere smir to moderate rain.

I was fishing with Robert Wallace and we really didn’t know what to expect, after the last outing being a choice between fishing fast sinkers among 20 boats in Gateside, or catching nothing.  We both tackled up with deer-hair emergers on fluoro, ready to try a hedged bet approach of presenting static dries for a few seconds, before figure-of-eighting them back.

I thought maybe a start over deep water, drifting into shallow, might show us where the fish were lying (if our tactics were worth a sook!).  The breeze at the start was north-easterly, so we set up a drift to take us from the deeps (of around 50 feet) midway between Inch Talla and the plantation, drifting onto the plantation shore.  That produced nothing, so we moved round to do something similar, drifting onto the Malling shore.  This drift brought up one fish to the F-of-8 that didn’t take, and then another – when we were tight onto the shore.  The second didn’t take the F-of-8-ed fly, but did take the fly static, when thrown back over the swirl.  Good enough start, and a pointer…

We took the boat up to Stable Point and drifted the shoreline of reeds, shifting our tactics towards the static dry approach.  This worked a treat, and we were rewarded with steady sport right along the shoreline, and then on round the Malling shore, which we zig-zagged in and out using the leccy motor – worth its weight in gold in these situations.  Many of the fish were tight to the shore, in just a couple of feet of water.

The only downer was our conversion rate – for every fish we landed we must have been bringing up 7 or 8 that were swirling at the fly without taking it down – even ones that could be seen taking it down, only to strike into nothing but fresh air.  Going by the decent number we landed, we calculated that we had well over 100 offers between us!  I wondered if a re-rig might help and I changed from the deer-hair emergers on fluoro, to a pair of hoppers on copoly.  At first the conversion rate did seem to improve, but after a while the jury was back out!  Speaking afterwards to the others who had fished dries, the arsy takes thing seems to have been a common occurrence on the day.

With all this going on with what was obviously a good number of fish in the Dog Isle/Malling shore area, you’d expect it to be getting busy.  No – quite the opposite.  The few boats that were working the area in the morning gradually moved away.  An odd one came in to do a drift, only to move on.  By mid afternoon we were the only boat in the entire south west bowl.  Maybe the fish in that area were not responding to other methods?  Maybe the twiddlers’ method can’t present the flies to the fish in 2 feet of water, 5 yards from shore – which is where many were lying.  The fish were not particularly residential, and many were really just big stockies.  What they were was strong as horses – don’t know if that was due to the water temperature and the fresh air coming in?  I retrieved a diawl bach from one fish that had broken it’s previous human contact, and a pink booby from another!  Hooking big, fit fish on light gear last cast before hitting the shore resulted in us needing to deploy the ‘walking the dog’ method of leading the fish out into open water before playing it out and landing it.  Worked a treat every time!
Other catches: Davy Tyrie and guest Alan Martin had 8 to the boat on floating line and static boobies.  Dougie Skedd and Gary Wright had 13 to dry fly tactics – sedgehogs and mayflies (there were a few mayflies hatching).  Trevor Gibson and Gary Heseltine F-of-8-ed boobies on a midge-tip at the Cages for 15 fish.  Star catch went to Jimmy McBride, who landed no less than 24 of Menteith’s finest.  Jimmy fished a floating line static, using black nymphs, brown and black hoppers, yellow owl and sedges at the Cages and the Rookery. 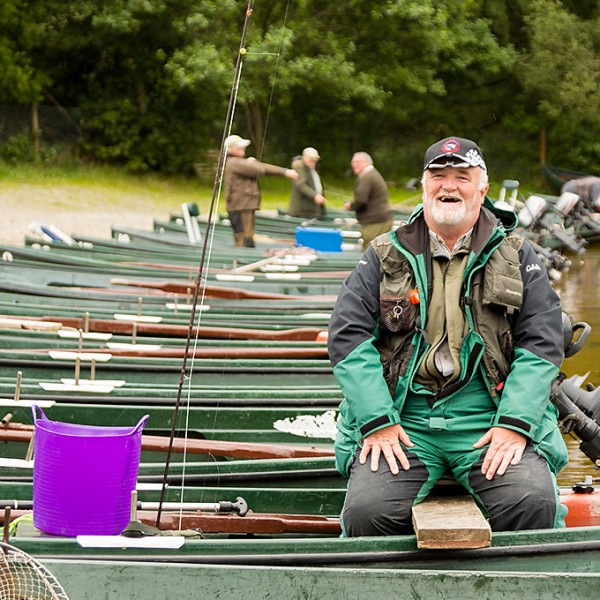 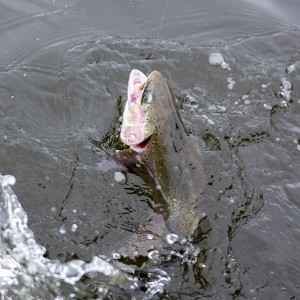 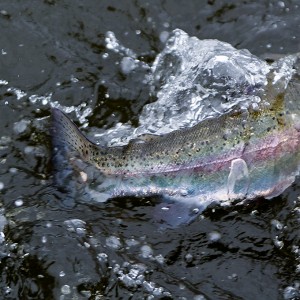 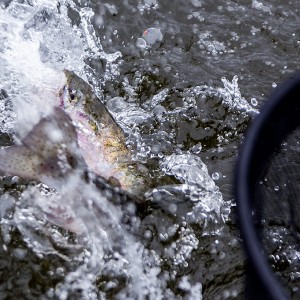 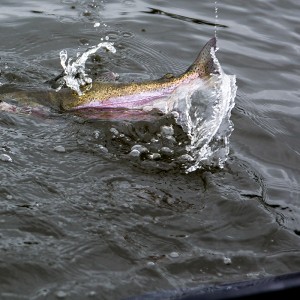 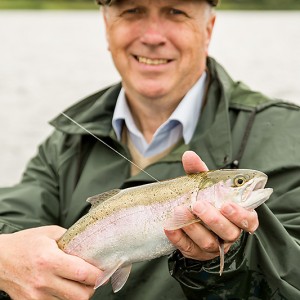 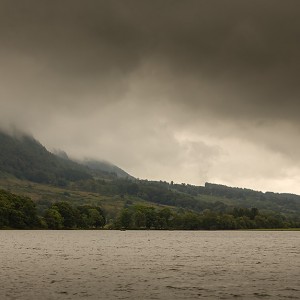 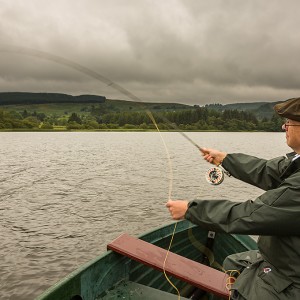 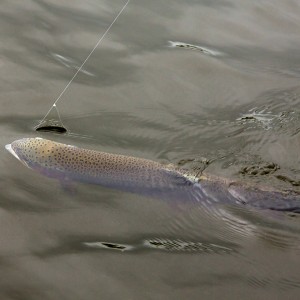 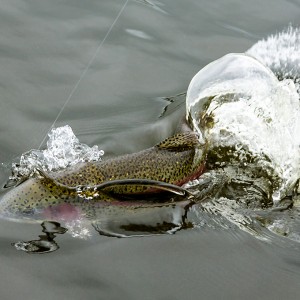 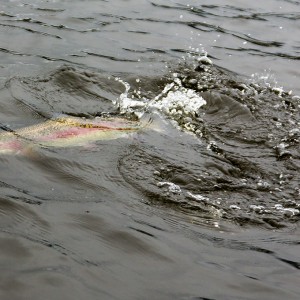 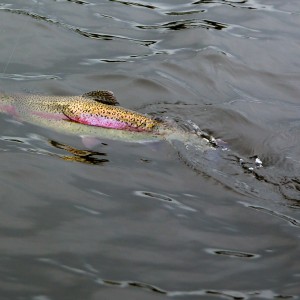