The weather forecast for Sunday was promising: between six and nine degrees, cloud cover and a nice wind for drifting.  Would we get another day like Coldingham, with so many rising fish that you did not know which one to cast towards? (No we did not!)  I was living in hope of another dry fly day as I drove towards Glencorse. However, the day did not turn out as the forecasters predicted.  We arrived to be greeted by a very cold east wind and a temperature of three degrees… four tops.  I did see two fish move, but was not tempted to tie on dries.  I was fishing with Bryan Griffiths, and I went with small black and green lures on an intermediate, Bryan with a Viva and a black/red cormorant on a fast glass. Our first stop was the shallow water just to the right of the boat dock.  Fairly soon, Bryan had one and I had two.  These three fish were not the stockies we thought we would get, but slim overwintered fish that jumped, pulled, bored down, and took a good bit of patience to get into the net, We both thought we were in for a good day, and then this drift just stopped producing.  After what seemed a long time we decided to move to the other side of the causeway.  We had seen fish move, well we saw two but that was better than none.

When we arrived, we saw a pod of fish move in front of us and I cast to one.  You can picture my surprise when it grabbed my fly as soon as the fly landed, and you can imagine my remark as it escaped when I tried to bully the big fish into the net. As I sat, thinking of what might have been, I recalled Dougie Skedd’s remarks to me about playing fish and yet again, I thought, Ed you are a prat,  Stop trying to drag them into the net.

Bryan and I then drifted west along the north shore, getting nothing but practice.  We caught up with Trevor and Gary, who were drifting on the drogue, so we had to move out and around them and headed for the wall where the burn comes in. After a long wait, Bryan had three more fish and I had one.  We repeated this drift, but all we got were soft tugs and pulls with no hook-ups.  We decided to head back to the east end.  On our way down the water, we saw Gary, Derek, Trevor and Bob into fish – a local hot spot we thought, but a bit crowded for us, and so on we went. We passed Dougie Skedd and Allan Brown and learned that Dougie actually had one on a dry fly, and had another few fish to wets.  Dougie and Allan ended up with seven fish in the boat.  When Bryan and I arrived at the east end we had little hope of catching any more.  Both of us were very cold, but to my surprise I got another, so we finished with four each, and it is always good when you have had a fair day and the same number of fish as your boat partner.

Tom Steven partnered with Bob Whyte fished the west end and the road shore.  They netted fourteen fish between them. Tom used a bright green blob on a DI3.  Bob also used a DI3 with an orange blob and a black lure.  Derek Kilgour used a floater and at times a fast glass.  He netted fourteen fish: a good brown and thirteen rainbows.  Del fished the west end and the road shore using an apps bloodworm and a black Howwood, fished static or with a fig8.

Our best boat was Gary Heseltine and Trevor Gibson, between them they landed forty fish; both used fast glass lines with slow pulls, their killing flies being black and green.  One of Gary’s fish weighed 9 pounds 12 ounces.

Our next outing is to Carron on Sunday 17th April.  Hope it is a bit warmer. 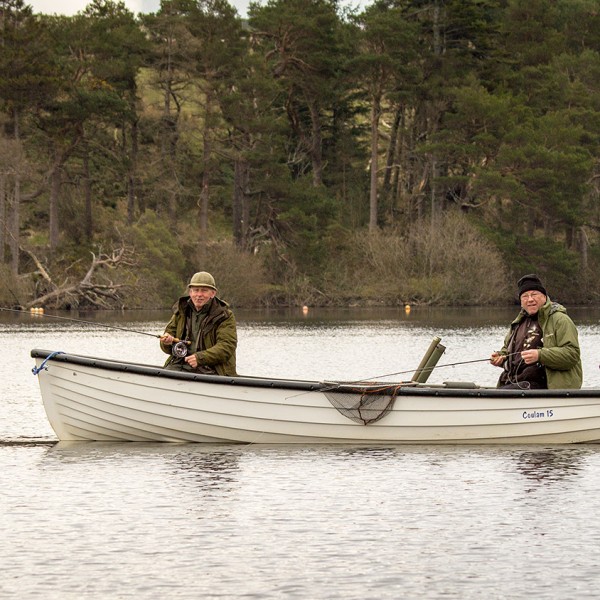 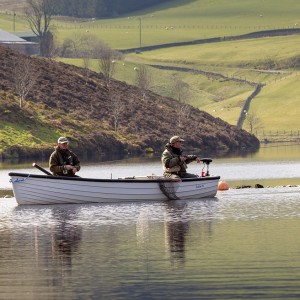