It was a pleasant change not to be charging up the Edinburgh bypass and M 9. Instead, Pencaitland to Gifford then across the Lammermuirs to Longformacus and up to Watch Reservoir.  On the way, lots of wildlife including two near misses with roe deer, dodging sheep and the most grouse that I’ve ever seen.

This was the first time that we been at Watch for a few years and anticipation was high, after hearing that fish were up in the water and likely to take dries.

Weather wasn’t bad too.  Moderate wind from the south west, and some cloud cover, with the temperature somewhere around 10 degrees when we arrived at 08:00.  Cool enough for some of us to add extra layers!

I was partnered with Innes Zenati for the first time in a while, and I started with a 5 foot midge tip, small booby on the tail, green holo Diawl Bach in the middle, and Viva cruncher on the top dropper.  Innes had on an intermediate with a selection of small lures.

Our first drift was from the top of the arm opposite the boat moorings, where most of the our boats had also decided to start.  The ripple was good, with some cloud cover.

About 100 yards down I was into my first fish on the Diawl Bach.  About 3 lbs and in cracking condition.  I started to see fish coming through the wave but nothing near enough to cover.  Another 50 yards or so, and I was into another nice fish of roughly the same size, again on the Diawl Bach. Thought that we had it cracked but then nothing all the way down to the dam.

We then had a few drifts in the same area without touching anything.

We passed some of the other boats who were having some success, with John McGonagle fishing a DI-5 having 3 fish.  Innes, on hearing this, decided to change to a DI-3 and we moved to the western end of the reservoir, where we had seen Dougie Skedd, Keith Logan and Derek McCarron landing fish.

After a while nothing, and then Keith told us that he’d been fishing dries with some success, so both of us immediately changed.

I then had a small brownie, a decent rainbow and another brownie of about 12 inches.  All on a size 14 black Klinkhamer with a black holo rib.  Innes had some interest without hooking anything.

After a while we decided to move to our original starting point and I changed the point fly to an size 12 orange foam daddy with Innes changing his point fly to a fab .

That’s when the fun started.  Innes was broken twice with fish taking his Fab and I had 7 rainbows to the daddy and a size 14 hopper.

A change to more orthodox dries by Innes then saw him take 4 rainbows.

We also had lots of other interest and lost a few fish.

The fish were up to about 4 lb 8 oz and in great condition.

Overall, a great day on the dries. 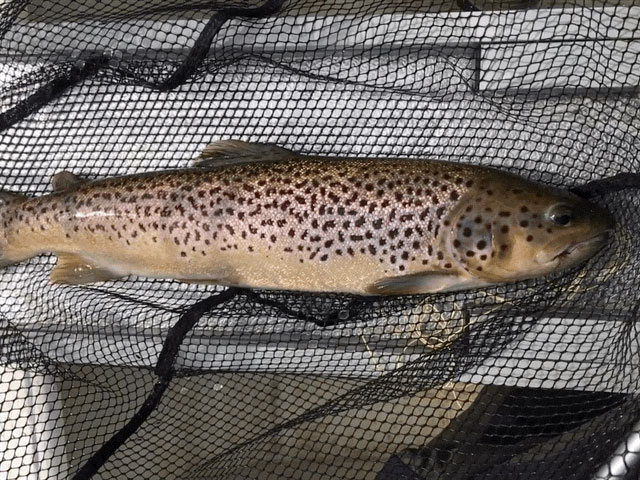 The next best boat was Dougie Skedd and Peter Fionda with 9 fish.  The total for 6 boats being 50 fish.

A very enjoyable day and a definite to return to next season.

Teamed up with  Peter Fionda for the day. Conditions looked good and the word from the locals was that fish were up in the water, so hopes were high.  In the absence of any better ideas, we went to the top of the wind and set up a drift.  Almost at once, Peter was bringing fish to his hogs, but to no avail.  The fish would not take properly.  I was beginning to think about a change to my wets on the intermediate when it all went tight and a fish came to the net on a small orange dabbler on my middle dropper.  We both moved a few more fish before another fish came to the wets.  A small white and green cat this time.  We kept drifting.  We kept moving fish, but the next fish came subsurface again to the orange dabbler.  Peter chipped in with a fish on wets.  He had changed, as it seemed the fish coming at the surface to his hogs and my muddler had no intention of hanging on.  A spell of fishing without flies followed, so a change was in order.  There was a fair breeze ,so I gave the dap a go.  A fish almost immediately!  Then the wind dropped.  I thought a dry might work and, again, almost immediately, a fish hung on… when I wasn’t looking!  A break. A disgrace. It had taken the foam beetle, so I tied on another.  Straight away another fish.  I thought I might be at the races.  Some hope.  After that I could have taken the flies off and practised my casting.  No response whatsoever.  Peter, however, had found his stride.  Three fish in the last period gave us nine for the boat and a decent day.