A small outing to start with – only 7 of us – and smaller by the end – only 3 of us survived, thanks to the weather!  In the middle of a very long, warm, wet spell, it was a dry, cool start, but the forecast rain for later arrived early afternoon, and we got a right drooking.  The water was 17.5C and the air was 13.5C at the start and never got above 15C.  Gareth reported that the warm water had turned the fish off, and indeed fishing was difficult but, as it turned out, far from impossible.

I had a boat to myself.  I started-out drifting with a team of sedgehogs, giving them the static/retrieve combo to prospect the water.  I got a few covers of rises early-on, but failed to interest any of them.  The rises dried-up as the wind strengthened.  Gareth had said the bulk of the fish were over the deep water.  So, I tried an anchorage north of the cages, so I was casting towards deep water.  I tried a whole range of tactics while sitting here… swinging nymphs high in the water, and with a weighted tail fly, on fluoro.  Nothing.  Washing line with a FAB on the tail… nothing.  I switched to a slow-glass line and tried counting it down in 10s until I got to 100.  Nothing.  I tried Dougie Skedd’s emergency tactic of a DI-7 and a huge minkie booby on 3 feet of leader.  Counted that down until I was picking up dirt off the bottom.  Nothing.  All this time, there was a boat (not our club) anchored out from the cottage on the north shore.  I was watching them pick up fish, periodically.  Watching them, I didn’t see any rocket surgery going on.  Maybe I was just in the wrong spot?

I pulled-up my anchors and moved to the back of the boat that was catching.  I still had the DI-7 and minkie booby on.  I cast it out and instantly a fish swirled at it at the surface.  I stripped the line to keep it high in the water and the fish followed and took it.  Success at last!  I took the DI-7 off and put the slow glass on with the big booby.  In the next period, I had any number of fish follow it.  Some would nip at it and some would bow wave after it, right to the boat, without taking it.  If it had been tied snake-fashion, with the hook at the back, I could have caught a dose with it, but only 2 more stuck.  I wasn’t in particularly deep water, and the fish were right up near the surface.  It was like another world, compared to my previous anchorage spot!  (The other boat that was catching were, it turns out, on DI-3 sweep lines with cats whiskers.)

The rain had set in by now, and it was dreicher than a wet weekend in Wick.  However, the rain killed the breeze a bit, and I started to see some nice rises close to me.  I picked up the other rod with the hogs on it and tried covering the rises. I got a few looks to them, but none that would take them.  I decided to try a more subtle approach and changed the whole leader for fine double-strength and a pair of slim hoppers – a black and an Adams.  Blummin’ eck!  First cover I got, the fish took the black hopper lovely.  I got that one in, got back in the water, saw a rise, covered it, and that one took the Adams hopper, just as nice!  Annoyingly, after that, the wind got back up and the rises petered-out.  I pulled up the anchors and tried drifting, looking for a rise to cover, or any to come out the blue.  I got a few looks, without any solid takes.

Late in the session, I tried to catch the slight shelter that was being afforded the home shore from the casting platform, round by the lily beds.  There wasn’t much of it, but a cast into the little alcove right at the casting platform resulted in a fish taking the Adams out the blue.  It was a long, lean fish with a huge tail – possibly one of last year’s.  I wasn’t about to get the camera out in the pouring rain for it, anyway!  I repeated the drift, and hooked and lost another fish and had another couple of half-chances, before calling it a day.

It seemed that you needed to be in the right spot, as the other rods had all struggled the same as I had struggled when I was at the cages.  Dougie Goddard had one on a floating line and a skinny cormorant.  Alan Duncan had one on a snake.  Bob Whyte had one on dry fly.

Keith Logan writes: “I had three fish all on different lines, first to a Diawl Bach on a midge-tip, the second to a coral booby on a 15 ft ghost-tip, and the last to a desperate Dunkeld (about my third cast with a team of wets, but that proved another one-off) on a slow intermediate.  I tried to follow Colin’s lead towards the end of the session on the dries when one or two fish started showing, but once again found them very picky.  I had a few fresh air shots and then lost 3 in quite quick succession to hoppers and yellow owl.  I think I had momentary hold of a couple of brownies close into the shore that came to the hoppers.  I also lost one rainbow to the owl.” 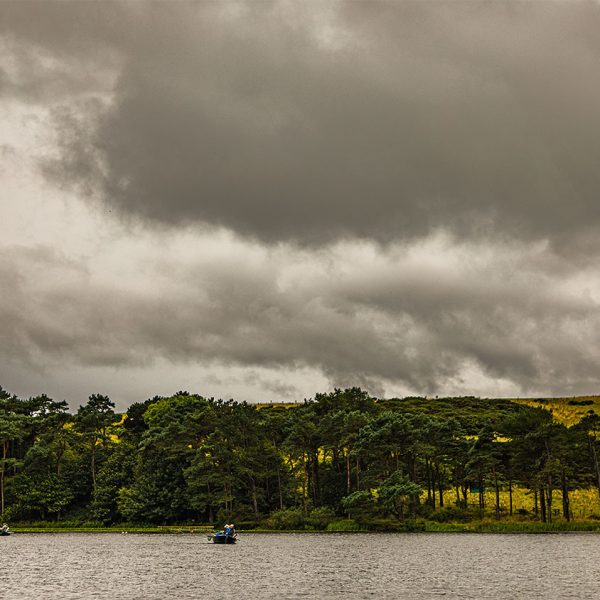 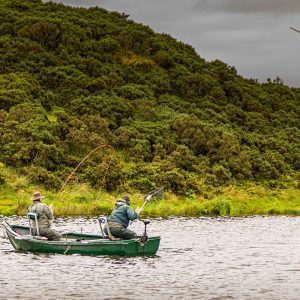 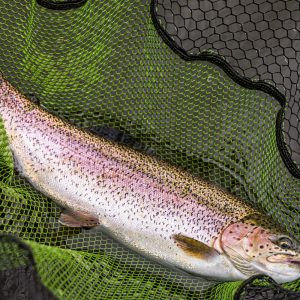 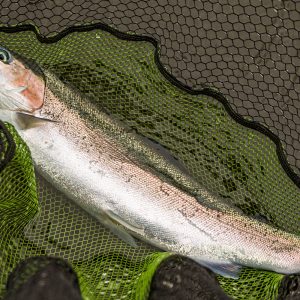 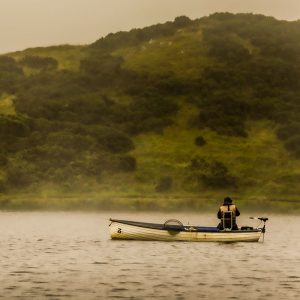