As soon as I arrived and saw this fog, I knew that the NE wind blowing down the loch was dry and much colder than the water and that the interaction at the surface was causing the fog. When we started out the air was 11 and the water was 16 Celsius, but at least the rain had stopped.

Armed with this information I thought that any sensible chap would tackle up with a sinking line and mini lures.  Not being a sensible chap, I put on a floater and three dries, a size 10 yellow owl on the point, a size 12 F-fly on the middle dropper, and a size 14 yellow owl on the bob.  Bryan Griffiths, my boat partner, also went with a floater and dries. We then thrashed the water for a few hours.  We did have a wee competition going however, counting how many swallows were attracted to our flies.  Yes, the swallows were very active on the water, but what they were getting we could not make out.  As the day wore on, the wind dropped slightly and you could feel a bit of heat in the air.  The temperature climbed to a giddy 13 degrees, and we started to see one or two fish move.  We then stopped counting the offers we had from the swallows and started to cast at the few moving fish, and eventually I had one.  We then moved to the north shore. Our thinking was that we would get a bit of shelter, and perhaps some terrestrials would be blown onto the water.  Being lucky, I did manage to hook another, but lost it after trying to bully it into the net.  This is a common failing of mine.  After getting nothing for a while, we moved back to the heathery bank and drifted towards the south shore.  We repeated this drift, as we had seen a few fish move.  As we were getting ready to start another drift, Bryan drew my attention to a solitary great red sedge skittering across the water, so I took off my point fly and tied on a size 10 Midas fly.  Towards the end of our next drift, a fish engulfed the Midas fly.  This fish I played off the reel just in case I lost another one.  At this stage, the air had turned colder again and we noticed that it was almost 16:00 hours.  I was starting to pack-up when Bryan suggested we have a last short drift along the stone wall on the south east shore.  When we got to the start of this drift I restarted the process of packing-up and had just removed the Midas fly on the point when I saw a fish move, twice, a bit downwind and very close to the stones.   Back on the point went a size 12 yellow owl, which was handy in my lapel.  I cast it close to the stones: nothing.  On my second cast I hooked and landed my third fish.  Then it really was time to pack up.

Stewart Barnes and Bob Allan were fishing together, both with floaters and Klinks and both had two fish.

Fishing with Hugh Thomson was Bob Whyte, Bob used a floater and yellow owls and he netted three fish.

Ten fish for our seven anglers’ does not sound a lot, but on the day, I think we did very well when one considers the cold NE wind and the warm water.  Had the air just been a tad warmer I am sure that we could have had a much more successful day.

The next outing is at Menteith. As I will be bobbing about on a loch in Orkney, Stewart Barnes will be collecting the cash and the cards at the end of the day.  I hope you have decent weather and have a few fish. 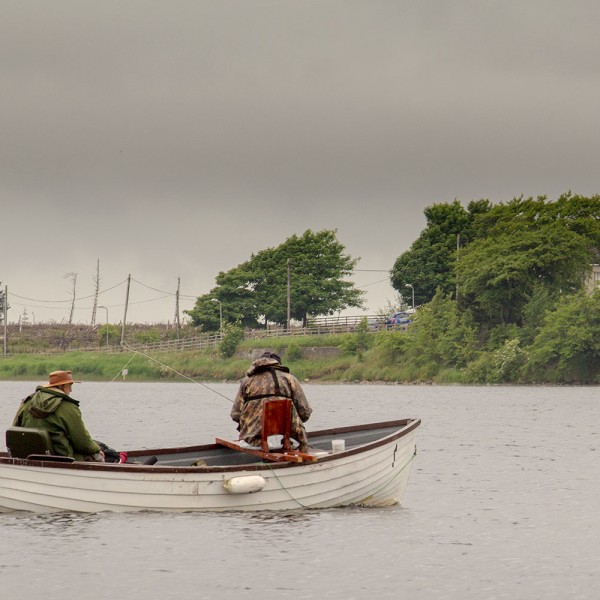 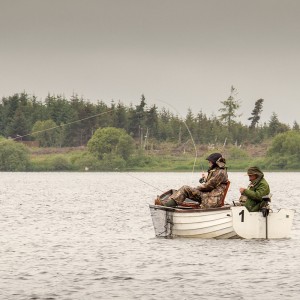 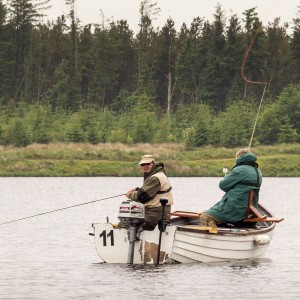