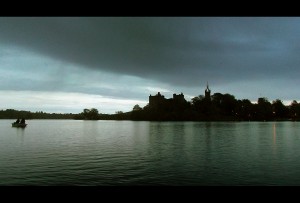 It was a cold evening at Linlithgow and one of those swirly winds that swung the anchored boats accompanied the cold. The water temperature was 14oC but the air was 9oC at best – Not good conditions for getting fish to rise. Robert Wallace and I were fishing together – Robert with an intermediate line and me with a midge tip and buzzers, which I was swinging around on the wind. This system got me some fish but more lost than netted.  Everyone found it difficult and it got worse when the thunderstorm started – in no time at all we had two inches of water in the bottom of the boat.  Everyone, other than Trevor, who was fishing buzzers under a bung, found it difficult. In addition, I for one was quite happy when it was time to stop.

Jimmy McBride and Derek Kilgour did well; they had seven fish in the boat. Ivor and Len also did well; they had six, fishing buzzers. Tommy Steven, who was drifting the loch on his own and persisting with dries, size 12 red hoppers, landed fish.   David Tyrie and his guest, Alan landed four. Our two John’s also had four. Tam Forest and Peter Middleton, swinging buzzers, netted three.  In all, fifteen fishers managed to land twenty-eight between them – a rod average of 1.8.  However, Trevor Gibson and Garry Heseltine must have been using magic along with their buzzers – they netted a further eighteen, giving them each a rod average of 9!

Just as we were heading for the dock, the rain stopped for a spell, so I managed to take a picture.  Then it started again and came down like stair rods.  Everyone in the car park got rather wet just changing out of their waterproofs.

Glencorse is next, on Monday 19th – with luck, the rain will not be as heavy.  It will be interesting to see the underwater topography before the loch is flooded again.  However, I do have reports that it is fishing well.