A dodgy start to the day for quite a few folk.  I was quite early and, as I came past Standburn, I noticed a sign at the side of the road stating ROAD CLOSED.  I was following a highway maintenance vehicle at this time and it put its hazards on just after.  I dunno if he was trying to tell me something?   We then come to where there were roadworks underway, and he pulled in, which allowed me past.  There was nothing blocking the road at this point, and I got through.  When I got to Black Loch, Bob Whyte was already there.  Steve Kilpatrick arrived shortly after, saying he had had to persuade them to let him through… and then after that… there was a long gap before the rest of our guys started to arrive… all of them with tales of being forced to turn round at the roadworks without the foggiest idea how to get to the loch!  Thankfully, they all found a way, sooner or later.  We all decided we had better take an alternative route home.  It was no bother coming via Slamannan and Hallglen and onto the M9 at J5 instead of the usual J4.

I was fishing with John Miller.  We missed the memo about the north shore and into School Bay being the hot area.  We could see there were a lot of boats fishing that side, but we were happy to have the space and quiet to do a long slow zig-zag of the south shore.  Only problem was there seemed to be very few fish over that side… We only had one for the whole morning spent working that side.  We would have gone across sooner, but the number of boats was putting us off a bit.  We felt we would come into fish somewhere, but it just was not happening.  By the time we reached the heather bank, we were resigned to going over and squeezing in with the armada.  Not that it was a particularly busy day, number of boats-wise.  I’ve seen a lot worse.  But when you are drifting, boats dropping anchor on your drift ahead of you becomes a bit of a PITA.  Anyroad, we got fish in the north reedy bay and around the jetty.  Always trying to play catch-up, though.  The one trip we did down and into Schoolhouse bay produced nothing – possibly had their tin helmets on by the time we got there!

Our fish were all on midge-tip/washing line set-ups – small booby on the tail and snatchers, Diawls, etc on the droppers.

John did a ‘Black Loch McNab’: in addition to his rainbows, he caught a perch and a roach.  When I found out Keith had caught a pike, I was wishing I had taken photos of the perch and roach to make a 4 species set!

I have little confidence in fishing Black Loch, since this is a water I’ve struggled on over the past couple of seasons. There was not much sign of rising fish but the cloud cover and cool northeasterly breeze made the conditions ideal for drifting and prospecting to find fish. Black Loch has been added to the portfolio of SANACC competition waters and there were a few well known rods in the car park, ready to do a bit homework for the national qualifier on Thursday.  (Ed: Ah, that explains us being carved-up by a pair of desperado Andrewbackers down at the dam!)

Reports suggested that the fishing had been good during the week and the fish were in the upper layers.  The usual hot spots were mentioned: both North and South Reedy Bay as well as the Heather Hills, with School Bay probably the most consistent. I set-up with a 3 ft-mini-tip and washing line to start, with a booby, Diawl Bach and natural muskin.  It was clear a few boats were going to be setting anchor around the pier, so it was a case of navigating around them to start. I headed up towards Forest Bend, since this would give me a chance for an uninterrupted drift into School Bay.  The drogue was needed to slow the drift and get fishing but the conditions were still comfortable.  First cast I had a follow, only to lift the flies at exactly the wrong time.  A few casts later, something similar.  I slowed down the retrieve, just keeping in touch with the flies, and held them on the hang.  This seemed to work pretty well.  The fish were following right up to the boat before making their move.  A lot of the time the line just stopped and it was a matter of lifting into them.  The fish quality overall was excellent and quite a contrast to recent seasons. Today was going to be a good opportunity to try a few different patterns, however, the fish did not seem overly fussy, so a lot of those experimental flies tied over the winter seemed to work quite well.  Something bright on the point and a couple of drab size 12 nymphs or snatchers worked best for me. There was the odd buzzer around and a couple of upwinged flies getting blown off the surrounding fields.  Definitely a few cow dungs around.  Not much surface activity and although I promised to have a go with the dries, I resisted the urge since the sport was very steady over the day.  I was also chuffed to land a decent pike (my first on the Black Loch).  Although it was defined as merely a jack (since it was under 10 lb), it gave a tremendous fight and was in stunning condition. 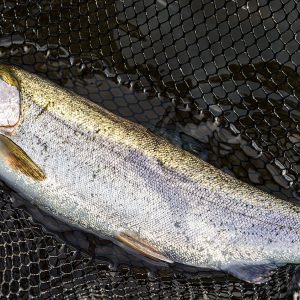 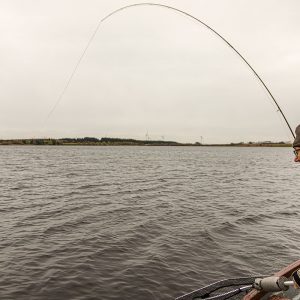 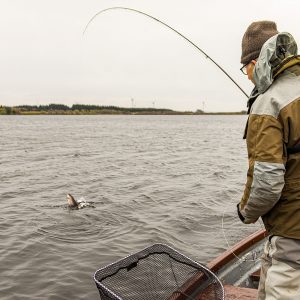 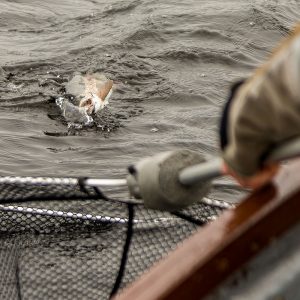 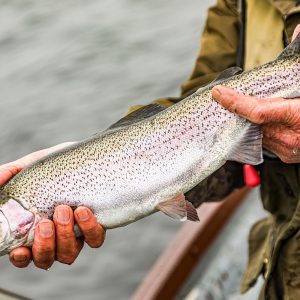 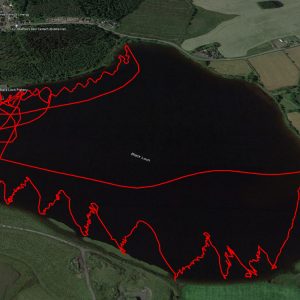 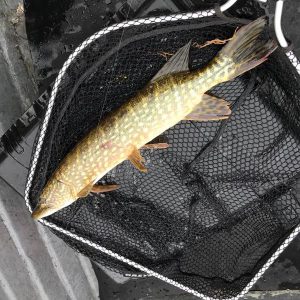