This was a game of two halves for Peter Fionda and me.  The conditions in the morning were decent.  Although the breeze was fresher than you would want for fishing dries, we had good overhead.  And the temperature was back down to normal – in fact a layer was required at the start.  Peter put up two rods to allow him to alternate between a washing line and dries.  I just put up dries.  We made our way along the west shore and were seeing fish rise right in the margins at the head of the wind.  Right from the off, I was raising fish to the dries, but most of the early offers were false takes or fresh-air shots.  I scaled down what I was showing them a bit.  I also changed profiles and put a suspender buzzer on the tail.  I spotted a nice rise right in front of me and covered it.  It took the suspender nicely and I tightened into it.  I was just about to reach for the net when it fell off!  Oh well…  By now, Peter was having no interest in the washing line and was swapping rods for the dries.

The main problem was trying to get onto the rising fish, as they were so tight to the shore, and the breeze was blowing us out into fishless water in no time at all.  We both agreed we were not fans of trying to fish dries at anchor.  I got us back in, tight in to the reeds and a fish took the suspender OTB first cast.  It ran round the back of the boat and threatened to get into the reeds.  I had to stand up and turn round and was concentrating on trying to steer it away from the reeds… and didn’t notice I was now standing on the line.  The fish, not liking me trying to bully it, gave a surge… PING!  That’ll be a break then!  I retackled.

It was such a small productive area that we tried zig-zagging the top end of the south shore instead.  This worked better, and we even found fish a fair way out from the shore. Peter now had a good spell on the dries.  He caught 2 fish to an interesting-looking F-fly with a blackish body and a pale ginger wing.  The second fish was a lump.  We weighed it in the net and it went 5 lb 8 oz.  Peter was also getting quite a few looks to the same fly that were stopping short of taking it.  About now, I finally landed a fish on the suspender.  Hurrah!  Not long after, I had a ridiculously violent take on the dropper (a black half-hog).  It was late in the retrieve with almost all the line in, so very little give.  It was also one of those that comes totally unannounced and catches you with your pants down.  It took the fly and bolted down in a split second, wrenching so hard that the simple friction of the line going over my finger was enough to break the whole lot off!  I retackled… again.

This time, I put a black hopper on (given the success of Peter’s black F-fly).  That resulted in the complete opposite to the last fish – a lovely slow, leisurely rise that resulted in a cracking-looking fish in the net.  Not long after, Peter showed that he could lose fish as well, when he hooked one, only for it to drop off in mid-play.  I then got a repeat of the violent smash and grab job, this time to the black hopper.  A third break!  Jeezo – I’ve barely had 3 breaks all season before now!  I retackled… again.

That was the end of the first half.  The sky opened-up, the sun appeared and the breeze freshened.  And that effectively killed the surface activity for the rest of the day.  Although we did get the occasional show to our flies throughout the afternoon, we did not stick to another fish.  At least it meant that I didn’t lose any more flies – just the 5 over the day!  Nine fish hooked by the boat, but only 4 landed.  Not great!

I was very surprised just how appealing the conditions were when we arrived, decent cloud cover, temperature was much more pleasant than the last few days. There were no recent catch-returns for the loch with anglers sensibly keeping their powder dry during the brief but brutal heatwave.  Conditions for all fisheries have been tough. If anything, with that fresh south-westerly it actually felt refreshing.  Like Fraser, I was expecting to have to go deep into the water column to find the fish, but changed my mind and decided to set-up the dries initially – CDC, Sedge, foam beetle. Trevor had enjoyed a good session at the lake at the weekend on a midge-tip with a small biscuit booby and Diawl Bachs and there was no reason that this should not work on the Black Loch.

We procrastinated, but felt that drifting out over the open water, rather than focus on the shallower water might be better. Our first drift was out from the jetty along towards the Forest Bend.  It was a quiet start, with fish showing no real interest in either the dries or washing line.  Our first bit of good fortune was seeing a little pod of feeding fish cruising out to our right, Trevor maneuvered the boat back and out a bit further to intercept.  A trout locked onto the foam beetle and that was our first fish of the day.  The fish was a lump and in great condition.  There was a real lack of feeding fish, but any covers generally got some sort of response.  As we headed into School Bay another lump had a go, this time at the Black CDC shuttlecock, and after an epic struggle I managed to net that fish.  Note to editor: remember to pack your long-handled net – this fish was a real bruiser, well mended again and in terrific condition.  Trevor was chopping and changing to try and find the answer,  I just sat it out on the dries but action was slow.  We had some superb long drifts out over the deeper water towards Heather Hills and there were some great wind lanes to prospect.  By this time Trevor was getting a little interest but nothing was locking on,  I picked up another slab, this time to the sedge. I then hooked another after what seemed an eternity, only for the line to catch the point of the boat and I got smashed.  “Oh dear!”, I thought.

We then headed across to Reedy Bay and saw Peter pick up a couple of fish in quick time, we thought on dries (it turned out to be a small black f-fly that also works well at Harelaw).  We pushed back then worked the shoreline right along into Dam Bay. Colin was having an unlucky time of it by all accounts having being broken 3 times over the day, Fraser also had a smash take – all very unusual. We spent the next few hours fishless – an odd bit of interest but nothing that troubled the net.

I switched to 6ft midge-tip and washing line when the sun made an appearance.  That accounted for one more fish, but conditions got tough in the afternoon for everyone. We then surrendered and decided to drop anchor next to Fraser in North Reedy Bay.  He reported that he had some great sport first thing with dries (suspender and shipmans buzzer and deer hair emerger). Trevor finished the day well with his trusty little booby doing the business.  He also had a bit interest in his flashback Diawl.

Our seven rods finished with 14 fish but we were all impressed by the quality of them, and it could have been more with a bit of good luck.replacing the bad. 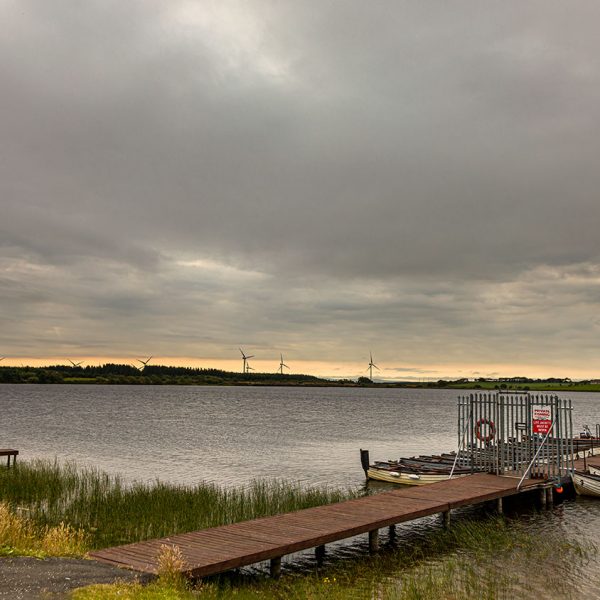 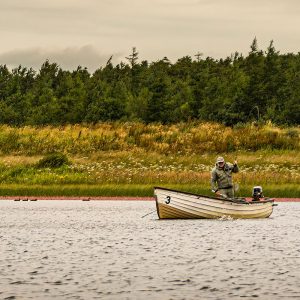 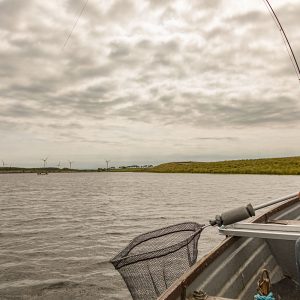 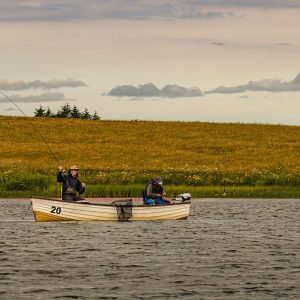 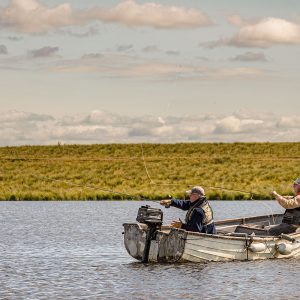 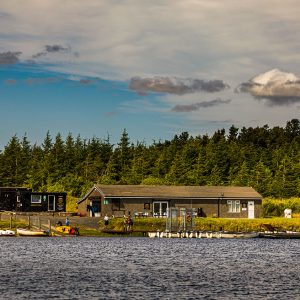 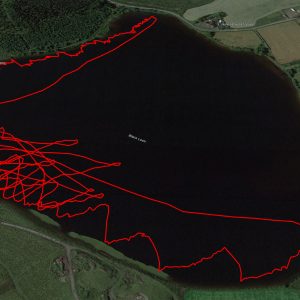