I was fishing with John McGonagle.  We joined the armada and headed up towards the Malling Shore, first thing.  There were already a couple of boats working the area, drifting out from close to shore, in line towards Dog Isle.  The conditions felt really good, but once again there was little sign of actively feeding fish, which sounds typical of recent day sessions on the Lake according to reports.  John set-up with washing line and buzzers on a di-3 and I set up with a couple of smallish CDC patterns.

John got off to an absolute flyer: a fish first cast to his hot spot black buzzer.  When I say first cast it was probably not even a half-cast and I think John got an even bigger fright than the fish!  This was a really encouraging start and John kept getting occasional knocks, but it was a surprise that there was zero interest in the dries until we had drifted right across to Dog Isle. At that point there were a few half-hearted splashes at the CDCs but I didn’t convert any of them.

We continued to explore in and around the Malling shore area for probably far too long for little reward and more and more boats were heading in our direction.  Boats around us were landing fish quite regularly but most looked like they were pulling on light lines.  I switched from the dries to the washing line, persisting on the floater, while John thought about coming off the Di-3 and putting on a floater, so in other words we were already scratching our heads!

I finally had a bit of good fortune and netted a very small rainbow to a candy booby.  We then headed for cover in at the cages.  Boats were working both ends and along the rope and there were a few nets being employed.  We saw Trevor and John Gibson drifting close in by the ropes and picking up fish.  Trevor was doing well and showing us it was possible.  John switched to a floater and straight lining buzzers and got smashed almost immediately.  By now we were approaching the burn mouth.  I was still on the floater but had replaced the booby with a fab and added a couple of buzzers.

We then had our most consistent sport, picking up fish split evenly across the FAB and buzzers, the size 12 vicar variant doing the heavy lifting.  It was getting fairly congested at the cages so we headed down to the rookery and Sam’s point but failed to find any fresh sport.  We tried a drift between the shallow marker buoys where there was a lot of commotion that piqued our interest.  John covered a rising fish that turned out to be a stunning perch of around  the 1lb mark.  I was stubbornly back on the dries – why oh why!?  I moved one fish in reedy bay where John then excelled with a double header on his Di-5.  This time 2 stunning perch!  He then followed that with the best fish of the day heading into Hotel Bay that fell to a Tequila Booby.

We finished with 9 fish to the boat – a tough old session with the temperature picking up in the afternoon.  It was interesting to see that the Scottish Clubs session that evening recorded some impressive returns and it seems the fish are a bit more active at the moment in the evening, as you might expect.

Started at Malling, where half the population appeared to be fishing.  Nothing being caught by people just going through the motions, so we headed over to The Plantation.  Fish there rising.  Rising and taking the mayfly I had on the point perfectly.  Except, when I lifted in there was nothing.  Nada.  Zero.  Total absence of contact.  I could see the fish come up, mouth open, fly into mouth, close mouth, descend.  Zero contact.  Others fishing dries reported similar ‘fresh-air shot’ problems.  Stewart Barnes with me was gnashing his teeth too. Same treatment.  Thing is, I could see what they were rising to naturally.  It was Caenis scrot.

Changed flies to a sparkle gnat size 14 and a hares ear shuttlecock size 16.  All the way along past the heronry I could have been fishing without flies on.  Stewart was still rising and fresh airing fish but also Hooked a couple that fell off.  Fish falling off like that is a sure sign they aren’t taking properly.  Stewart gave up on dries and changed to a washing line. That gave him a fish almost instantly, but nothing after that.  Suddenly I spotted a fish in range and dropped the flies in front of him.  Bingo!  Just like that, a good firm take and one in the boat. It took the 16.  Two more followed OTB and it looked like I was in business.

Naturally, on that sort if day, things didn’t go to plan as the wind started to swirl about and spoiled our nice drift.  Boats behind us, so we went round into Arnmach.  More risers – on Stewart’s side.  When he got onto one, he was still getting the runaround with false takes.  I got one good one from a cover behind the boat, but that was all we got.  I felt we wasted a good opportunity in there.

Back to The Plantation, but no risers this time.  Stewart got another one on the way back down, but I was confronting the classic problem of OTB dry fly fishing.  They will take the wee flies well but the teenies don’t draw them.  The bigger flies will draw them, but you don’t hook them.  Back into Arnmach.  I got broken by a good fish.  Reel wasn’t free running enough and the leader went. Stewart got another one.

Went over to the back of Inchmahome.  Fish rising in among the lily beds.  Got a cracker in there from a cover. Tried it again but no use.  Went in between the islands.  Got one to a cover and one more.  That made 11 to the boat.

The Club’s 16 rods landed 61 fish.  Top rod was Trevor Gibson, with 11.  Trevor fished a very small cat booby on a washing line along the rope in Cages Bay. 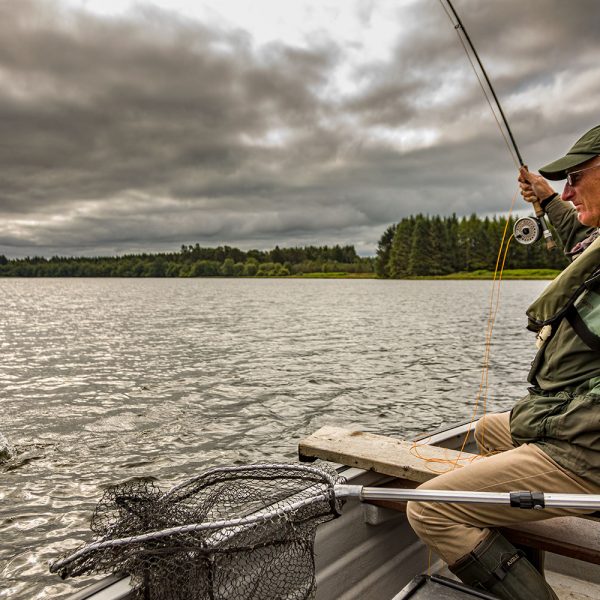 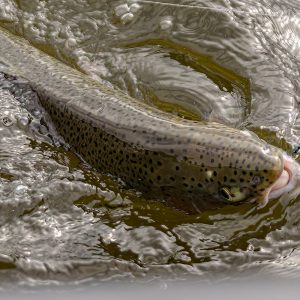 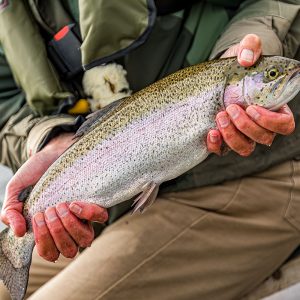 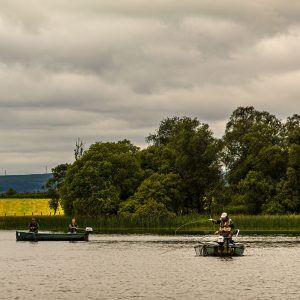 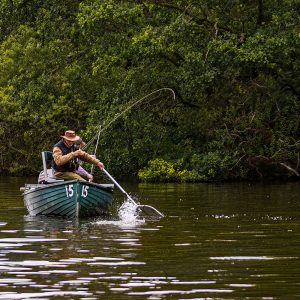 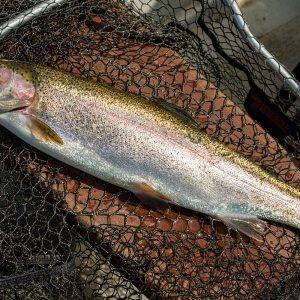 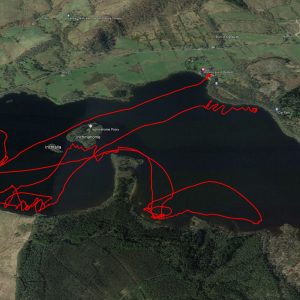