The weather this year seems to consist of one decent day… once in a while, followed by yet another week, or two, of bitter biting winds and just horrible conditions to be out fishing.  As a for example, Ron Sharp and I had been trying to get a day out on Gladhouse.  We cancelled once due to bad weather, we cancelled again due to bad weather.  Finally, we decided we had better go for it or we would never get out.  While there, Ron shot this short clip that summed up the day, perfectly…  Folk think we are out enjoying ourselves

So, it was with some kind of trepidation that I looked at the forecast for last weekend and saw… it was to be good!  No gales, no downpours, not Baltic.  Could it be true?  Could it?  It was!  Hallelujah!

The fish had some catching up to do.  The last time out on Carron, when you caught one, it felt like a block of ice in the hand.  Sunk lines was the order of the day then. Surely if it was warmed up a bit, there might be a bit of fly hatching and the fish must be keen to feed by now?  Yes, and yes again!

I was paired with guest Andrew Mackenzie, and we headed straight for Carron Bay – not very imaginative I know, but always a good place to start.  We started alongside Ed Green’s boat.  A light southerly breeze and overcast conditions made me pick up the dries to see if anything was prepared to have a go.  Although not much was to be seen rising, a string of half-hearted offers to my team of an Adams hopper and a black Klinkhammer convinced me to stay with it.  We saw Ed into a fish on dries, which also gave us encouragement.  After a bit, I realised my home made leadersink was causing my nylon to float like a cork.  Superb!  No wonder the offers were half-hearted.  Fortunately Andrew had a tub of decent stuff, and kindly put it on the middle seat for the day.

We drifted out of Carron and round the corner that leads to 30 minute bay.  Trevor’s boat was hanging around here.  Very quickly we realised why.  Here were fish rising… lots of fish rising.  ‘Chips in a pan’ rising!  What were they on?  A quick look in the water revealed a good hatch of smallish pale buzzers.  I stayed with my team, but reduced the Klink from a 12 to a 14.  The rises were oncey, making targeting them a one-in-every-so-many affair, but we started to make inroads and the fish started to come aboard.  Andrew was not a dry fly fisher – well, not before yesterday – but he was keen to learn, and after I gave him an Adams hopper, he quickly got the hang of it and started to catch.  The fish were a mix of wild brownies and overwintered rainbows – some a bit lean, others in good nick.

We got a good kick at the ball with those fish, before the wind more than anything else buggered it up for us by shifting round, giving us crosswinds along the very bit where the fish were rising.  The action tailed off and tailed off, though still giving us an odd fish and keeping us from moving.  Eventually, the changing wind hacked us off to the point where we decided to make a move.  Should we take a look back in Carron Bay, or start to work back down the water?  We took a look in Carron.  Dougie Skedd and Jamie Tocher were still there since the morning.

We came round the back of them and dropped in at the top of the bay.  Blimey! Here was another bunch going at it, ‘chips in a pan’.  More buzzers hatching.  That fairly got the scoreboard moving again.  We got 3 or 4 drifts out of them before a combination of our own pressure, the buzzers tailing off, the sun coming out, the wind getting up, and 2 more boats moving in, put an end to it.  With an hour of fishing time left, we decided to make a move, and headed for Binns Bay, where Dougie and I had found some fish on the April outing.  The wind had got up quite stiff by now, and we had a go with the pulling gear.  Drifting down the east shore, we were suddenly in among a tight wee group of rising fish in a stretch of no more than 50 yards of shore.  I couldn’t quite work out what these guys were about – splashy skittish rises.  I thought they might just be stockie rainbows sporting themselves.  Andrew picked up a good rainbow on a cinnamon and gold of all things, but that proved to be a one-off.  The risers were not interested in our wets.  I picked up the dries again, and despite two or 3 half chances chances, I failed to stick to one.  Time was up and we had to head in.  I would have loved another hour to try to work out an answer to those fish.

Trevor and guest Gary Heseltine had 20 to their boat on buzzers – 18 of them browns – perhaps a surprising split for buzzers.  Dougie Skedd and Jamie Tocher had 15 between them on dries.  Ed had half a dozen on dries – another hopper and Klink combo.  Adrian Coats and guest Allan Brown were the only boat to fish the downwind shore, where they fished DI-3 and sink tip and black/green lures to take 9 between them. 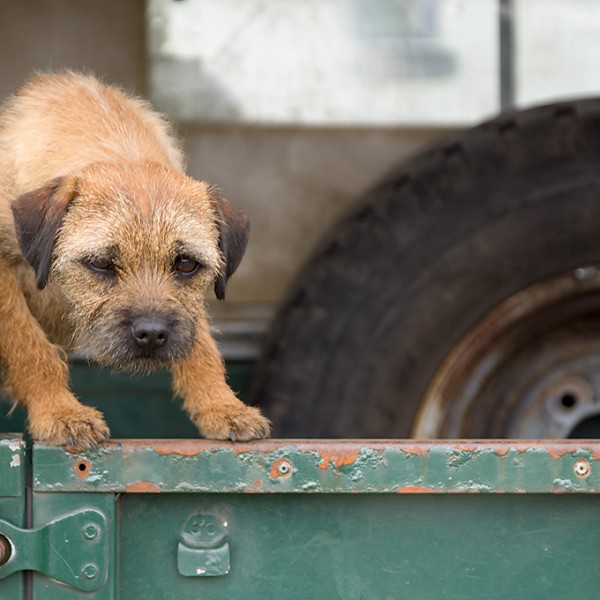 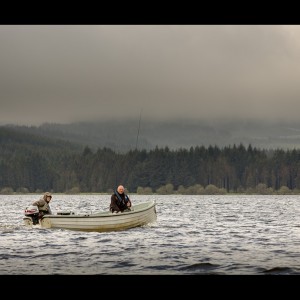 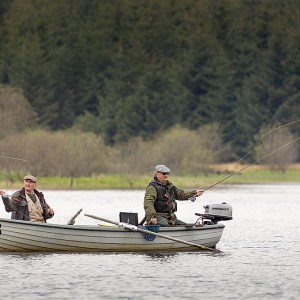 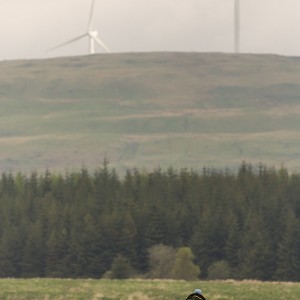 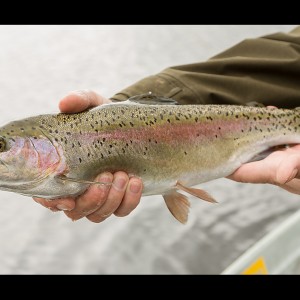 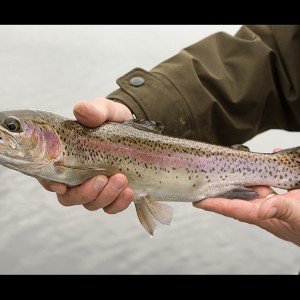 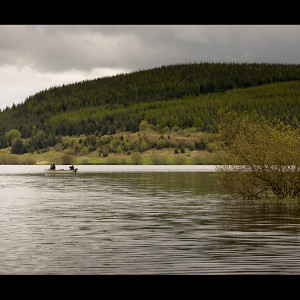 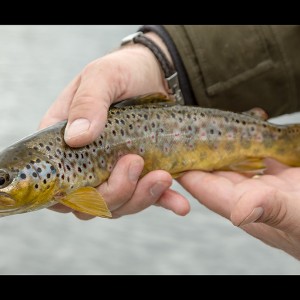 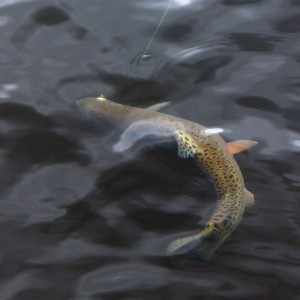 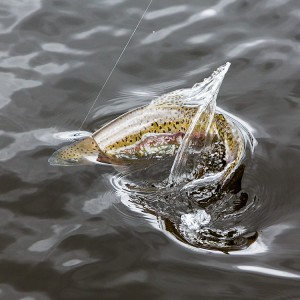 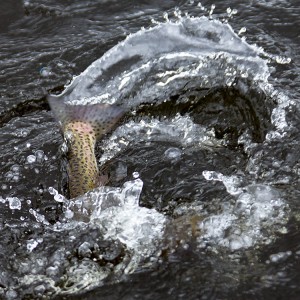 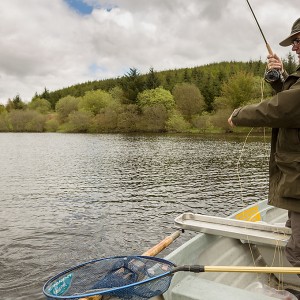 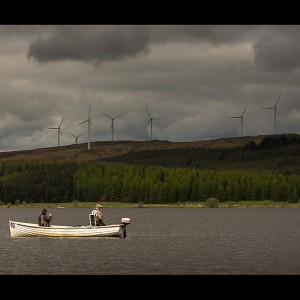 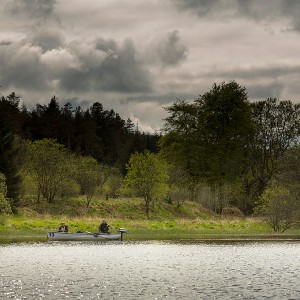 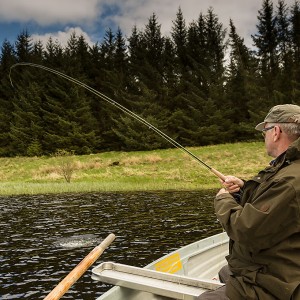