Another one of those days (there have been so many over the years) when, looking out the window at work during the day, it looked all set to be a great evening… warm, calm, overcast… might even get a Caenis hatch (I would genuinely like to see one – it must be at least 5 years since I last did).  But then when you arrive, you are met by bright skies and white horses coming down the water!  Ah well, at least we are used to it and just accept our fate…

The word was that dries were what was working, and 3 of the 5 boats chose to go with that and start by heading up to the top end to get what quiet water there was.  Of the other 2 boats, Trevor and Alan Holbrook stopped in the quiet water at the dam, while John Miller and John Levy headed for the middle bay.

Bob Allan and I were one of the 3 that went up top, and the short answer was that not much was happening there.  Gradually, the boats made their way back down the water.  We drifted our way down the road shore.  We tried a switch to pulling on intermediates.  Nothing.  Wondered if the warm weather had driven them deep, so we tested them with DI-7s.  Nothing.  In fact, we started to see an odd rise in water that was catching a bit shelter as we worked our way down towards the elbow.  Back to dries, and we picked up our first fish from that sheltered water – to a daddy.  On the elbow itself we encountered a good number of undersize browns muckin’ about.  Beyond the corner, we tucked in behind the 2 Johns, and before you knew it they had boated 3 fish in quick time!  Looked like they were pulling, but we stuck our ground on dries as there were fish showing now.

It wasn’t hectic, by any means, but we gradually picked up fish on the dries, with the daddy and bushy claret hopper scoring.  Usually you look to go a size larger as the light fails, but the strong wind dropped so much as the light went that we found ourselves dropping down a size, from 10s to 12s.  That kept us in touch with the few fish that continued to show, with an Adams Klinkhammer proving best pattern.  There wasn’t much meat on the water – goodness knows what they were finding to rise to.  We saw a very occasional Caenis drift past; that was about it.  Towards dusk, it kind of tailed away, and we made our way down the water to see if the boats that we could see assembled at the dam end were into something.  Turned out they weren’t, and we drew stumps.

Star pairing on the night were the 2 Johns, who had stuck with pulling Kate McLarens on floaters, to boat 14 fish between them.  Dougie Skedd and Bob Whyte went back up the tap end and found a decent hatch of Caenis late on.  As often, even a modest hatch proved tricky to deal with, but they eked out half a dozen between them to sparkle gnats and other assorted dries.

Other points of interest included an ever increasing head of grey lag geese on the water, including those camped out among the heather on the high bank – very odd-looking sight.  Also, a superb red sunset developed behind us, though the high sides made it a dead loss to capture in any way worth displaying.  Instead, I had a go at getting the strange half-rainbow effect that developed away to the east. 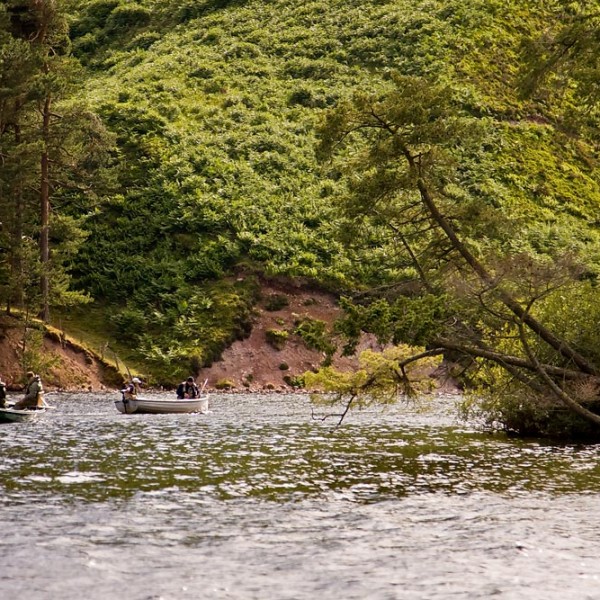 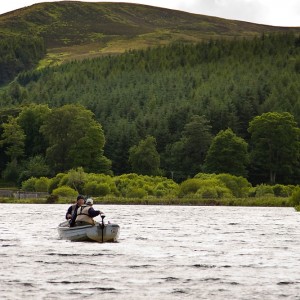 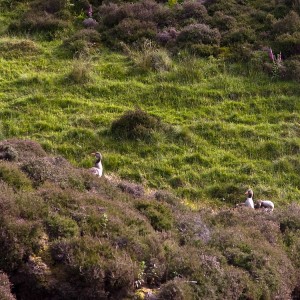 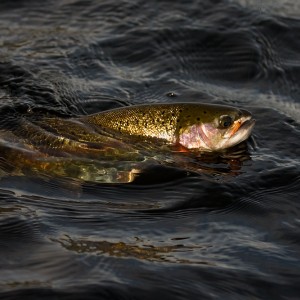 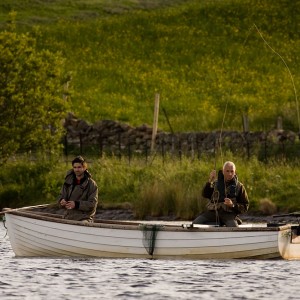