I had enjoyed a tough outing with Charlie Wilkinson from Cupar AC on the Lake the previous day.  Charlie is an experienced and good angler and what struck me was just how similar our approach and tactics appeared and how familiar his well-crafted buzzers and nymphs looked.  There seems to be very few secrets left in fishing and as we discovered on the day it was more about finding the fish and a bit good fortune.

The sun was already splitting the sky when we arrived at Frandy, the forecast was good (if you liked being cooked) but the prevailing cooling easterly wind was welcome.  We had seven boats for our session, with a minor change to the pairings since Jimmy McBride had slept in!  This gave me time to organise myself on the premise that I would fish around the pier area before Jimmy arrived.

However, by the time I had set-up the boat Jimmy had appeared, so we did not miss much time.  We motored initially towards the dam end, but got frustrated by the swirling wind closer in, so we edged out to catch the breeze to target shorter drifts along the South Shore.  There was little visible in terms of insects or rising fish early on, but there were a few visible buzzer shucks on the water.  A few of our club rods were bending early, Matt, Dougie Goddard and Trevor were already using their nets.

I had set-up with a midge-tip and washing line while Jimmy was on his full floater and a halo blob and cormorants.  Jimmy picked up an early fish to one of his specials and moved a couple more.  My end of the boat was far too quiet.  However, being the inside rod heading to the south shore should have provided me an ungentlemanly edge to work the margins.  This proved a fallacy, as Jimmy by now was picking up fish regularly and was tying a knot in his bass bag before I had bothered the scorecard.

We moved back out into the main basin.  By now a few sedges and an odd daddy were being blown onto the water, and the occasional fish was rising.  Boats that had been down at the shallow end had started to reappear.  Thankfully, we were now both picking up fish in the open water to smaller stuff fished almost static.  The takes were impressive.  Jimmy by now had changed to an experimental team of Diawl Bachs and a Boss Candy (another variant, I refused to be drawn into his tomfoolery), which did not slow his catch rate.  It was good to see Dougie Goddard, Trevor and now Allan Everington continuing to pick-up fish regularly, despite the wind strengthening.  All the boats had their drogues out.

We changed tack and decided to drift down the north shore, Jimmy was the inside rod on this occasion.  Now, from our earlier experience, this should have worked better for me.  Say no more, but the answer was no!  Best tactics for the day appeared to be a combination of floating line with cormorants and Diawl Bachs.

The club enjoyed an impressive outing and landed 78 fish, for an average of 5.57. 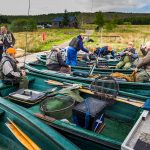 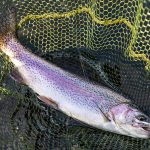 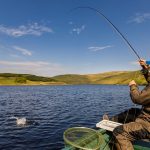 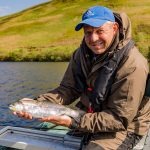 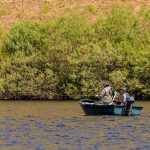 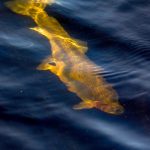 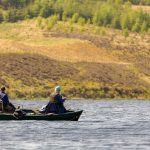 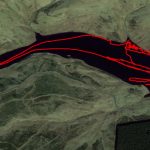