Big shout out to our esteemed Club Secretary for arranging this Carron outing on Saturday, 19th May.  Surely the perfect antidote for all that Windsor nonsense and thankfully not a Union Jack or Pearly King or Queen in sight.  It was good to see the fishery car park busy – hopefully a sign that Carron is back on track.  Conditions were far from perfect – they rarely are.  Sun was shining brightly, with not a cloud to be seen, and a pretty temperamental SSW breeze.  Jimmy, the new fishery manager enthusiastically declared not to worry: ‘Carron fishes well in the sun’ – really!!

I was fishing with Peter Fionda, who naively thought I would take him to fish.  Carron is a big expanse of water, and normally by this time of year the fish are feeding in the upper layers and dry fly tactics can be a good option.  I brought along the 5-wt just in case, and a wee box of dries just in case.  This proved a waste of time.  Peter had set-up with slow intermediate and a cast of traditionals.  I opted for midge-tip, with dabblers and Diawl Bachs.  We set the first drift just outside the buoys along the road shore and had a lovely leisurely drift back towards the dam.  There was early promise, Peter raised quite a few fish pulling his flies through the ripple – mostly browns slashing at his flies.  I was also getting plenty feisty sharp takes, I think to the olive nymph on the point, and finally landed a bright brown trout.  Our reactions were not really tuned into these browns; they were aggressive and a bit too quick.  We fished out to the dam wall but with no further success.

We decided to move further back and repeat the drift.  The wind was swirling, changing direction, and that seemed to put down the fish.  We bounced along the road shore, now towards Gull Island.   There were occasional rises, but only close-in.  Conditions by now were far from ideal.  We were already slapping on more Sun Factor 50, getting stuck into our packed lunches and chopping and changing flies and lines, but to no avail.  At no time did we feel we were on top of any rainbows.

We headed over to Burnhouse, and found some fish moving in and around the weed bed.  Peter changed to mini-lures and fast-glass, I opted for a 15ft ghost-tip and threw on a couple of cormorants.  Peter then caught a couple of brown trout to a white cat and an olive nymph.  I picked-up another brown.  We then popped along to Binns Bay, but that proved fruitless.  We bumped into Jimmy and Derek, who had been down in Carron and they had picked up a few fish, but were also finding it tough.  Jimmy was twiddling and Derek was pulling.

Our last roll of the dice saw us set-up a drift by the willows.  Again, the area looked really promising, with the odd fish moving in the quieter water.  Peter had a swirl from a bow to his orange blob.  I then hooked one that conveniently managed to wrap itself round a snag and that was that.  We saw Colin and Stephen come out from the corner of the dam wall to repeat the same drift along the willows.  This lifted our sagging confidence momentarily – they must have found fish, but they were just teasing.

A tough but enjoyable day and we finished with 6 brown trout to the boat.  Peter hopes for a better boatman next time, although to be fair he’d struggle to find a cheaper one.  Best boat by a distance was Jimmy and Derek who had 6 and 4 respectively.  Allan Brown had a good day with 3, mainly to Diawl Bachs on an intermediate, the best being a good brown trout around 1 1/2 lbs. 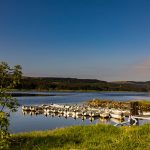 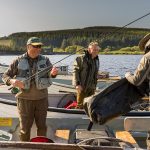 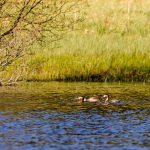 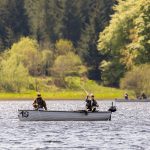