Strange weather for this one – warm, cold, calm, breezy, wind off east, north and west, bright sun, torrential rain… and spells of haar coming in off the sea.  At 3 o’clock, a bat appeared and started flitting about along the margins.  It was a decent sized one.  Not sure what likely species it would be?  Maybe trying to put in some overtime to get fat reserves up for the winter hibernation?

Anyway, John Gibson and I found it tough-going.  That was partly of our own doing by trying to get the fish to play on our terms with dries, when we should have been trying to play on their terms and giving them washing-lines and the likes.  After getting a few swirls and one fish to a fiery brown hopper we gave up on the dries.  After that we plugged away with washing line-type stuff and I picked up a couple more – one to a snatcher and one to a damsel booby.

Then we had a spell when cross-winds created a calm area up the west arm and fish started rising in it.  We went back on dries and chased after the risers.  A few wee buzzers (apple greens and blacks) seemed to be what was getting them going.  Finally, I hooked a hot fish on a size 14 black Klinkhamer, only for it to shoot under the boat and take the line between the boat and the Minn Kota.  I had to put the rod down and lift the Minn Kota to get the line off.  The fish was still on, but as I brought it towards the net, the hook came out.  Not surprisingly, the wee B100 (not the stoutest wire in the world!) had opened out.  That was the only one we hooked out that spell!

We went back on the drift with the washing lines and John picked up a fish.  I had several pulls during this spell, but didn’t stick to any of them.  Ended up figure-of-eighting nymphs on the floater on the drift for the last while and I picked up our last fish on a cormorant.

Started with the washing line but was not getting anything.  Then wrapped the line round the engine, which was a bit of a nuisance!  Had to take the engine into the boat to get the propellor off.  Knackered midge tip!  That was the start of a very exasperating day.  Matt had a couple out and down from the boat house, in the slightly deeper water, fishing a fast glass with FAB and cormorants.  Eventually, I managed to get one on a Diawl Bach, fished on a floating line.  At this stage we had lots of follows but they were difficult to hook.  Then they seemed to disappear, and I started switching lines and flies. put on a sink-tip and just before the narrows in front of the lily beds got a fish of about 10 lb on a tequila booby!  No scales but got some photos… 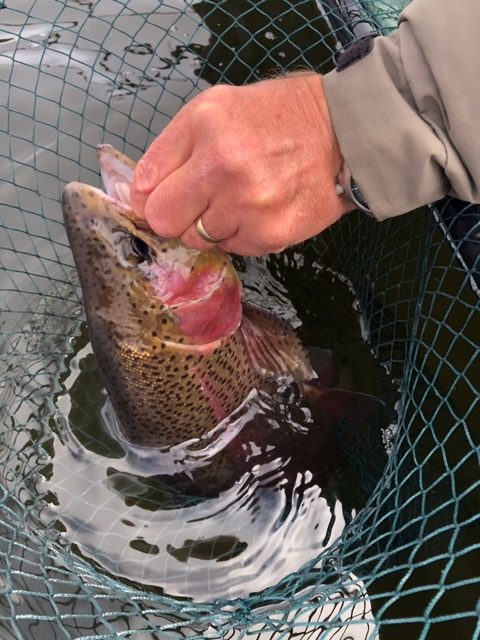 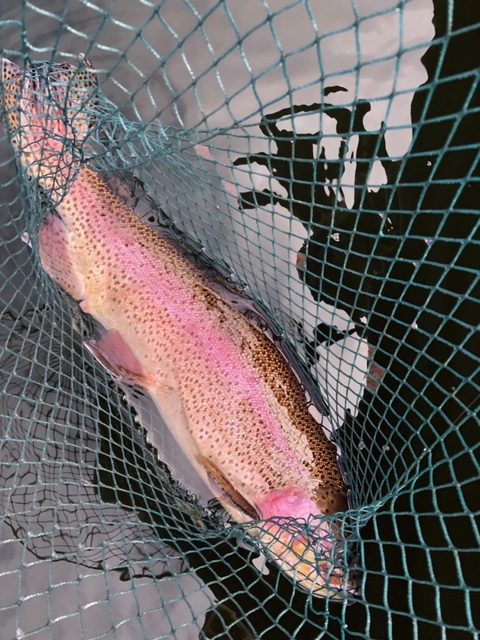 Then into the narrows, where we started to see some flies in the surface and a few fish rising.  Matt got another double on cormorants and I changed to dries.  Had a nice fish to a small half-hog and then a few came short.  Then they disappeared again, so we went up to the main basin.  Anchored for a while between Steve/Gary and Trevor.  Matt had another and I got 3 to a small green buzzer.

Final score 5 each.  Never felt that I knew what I was doing the whole day.  Very frustrating.  RW

Just to say, five rainbows for me today.  I’m thinking 13 for Gary.  Gary did well – he had a very large Blue around 4 lb which fought him tooth and scale.  Gary also had a cracking rainbow of nearly 7lb (scales used ) – a bit of a slab.

Best fish for myself was a ‘bow around 4.5 lb.  Garry was fishing floating washing-line; pink booby on point and blue redhead Diawl Bachs.  I was fishing mostly midge-tip washing-line with pink booby on the point and a mixture of flash back D-Bs and a selection of old boy flies:  Kate McLaren, silver butcher, and black beetle.  SK

A Chuckle Brothers style outing for Peter and me.   We did not catch many fish, but we learnt how to replace a shear pin in a Minn Kota engine and witnessed the sad end to my Hardy Artisan top section!  You would think by now we would have learned a bit more.   Thanks go to Peter for his patience.  Another one of those Coldingham outings where we got reasonable interest, but actual hook-ups were few and far between.  I ended with 3 fish to dries (Bibio style hopper) and one early to a small coral booby.  Peter chopped and changed tactics, but like me spent too much time on dries.  The fish were clearly wrong, however.  A switch to nymphs and traditionals, worked through the ripple, accounted for 4 fish.  Interesting outing!  KL 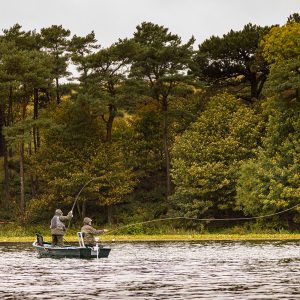 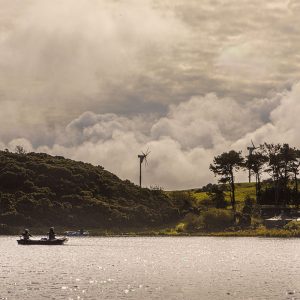 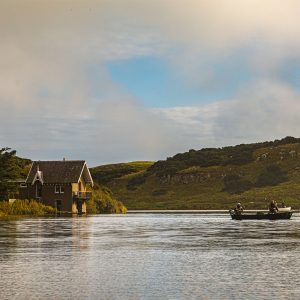 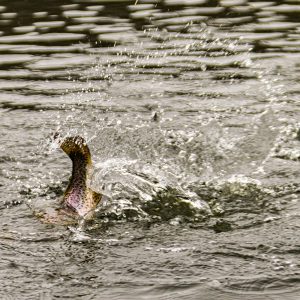 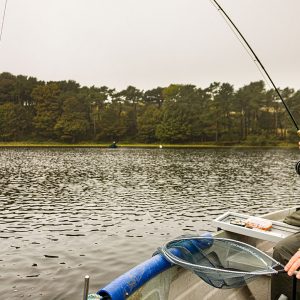