A calm start to the day. Fingers crossed for some dry fly sport. Eric Singer and I headed out on the leccy, taking it slow, looking for risers. We passed a couple or 3 at the 2 buoys, and took note. As we moved towards Arnmach, we spotted 3 or 4, well spread, but worth a stop. I put the flies out – a 14 black klinkie and a 12 black hopper – to wet the cast before degreasing it. No sooner were they on the water, but a fish came out the blue at the Klink! the nylon was floating like a cork of course, and the fish shied away without taking the fly.

That was the only chance we had there, though we spotted Stu Barclay into a fish not far from us, in equally open water. We went back to the 2 buoys to see if anything had developed. Indeed it had. There were fish on the pop – here, there, everywhere, all very tight to the shallows marked by the buoys. They were tricky – several decent covers were ignored, I suspected due to the fish being very high in the water, rather than to poor presentation (well, at least on this occasion!). Things were not improved when a 3-man boat (appeared to be 2 anglers with a ghillie) motored right through the rising fish in the shallows before stopping a cast’s length away from us. Thanks for that!

Eventually, a nice resident fell for the klinkie, but just after that a light breeze got up, the fish went down, and that was that. I put up the other rod with a midge-tip and washing line, putting a black snatcher on the top dropper. That quickly brought a nice fish to the boat.

We moved over beyond shear point and bumped into Derek Kilgour and Trevor. They were just getting going on dries, drifting into the shallows in the breeze and we watched them put 3 or 4 in the boat. We went back to the dries, but all we could do was raise fish without getting them to commit. In frustration I gave the washing line another go and it picked up a 2nd fish to the black snatcher.

We gave up on those fish and looked further afield. Derek and Trevor ran out of steam on those fish too, and moved on to International Bay, where Derek picked up a rare brownie – a good one too. We went away over to the butts, where we ran into Stu and Dougie Goddard. They reported that they were getting wee flurries of activity from fish tight in to the reeds. We sat and waited for a bit, but our patience drew thin and we moved on. Stu reported later that we just happened by during a slow spell – he picked up 8 fish to a black Shipman’s.

We looked round the end of Arnmach for risers and bumped into Dougie Skedd and Bob Allan. They had had a bit of dry fly action to Klinkhammer and hoppers in Gateside. As we sat chatting, a fish rose within range, and a speculative cover was met by a surprisingly instant, positive and welcome reaction. One more fish was contacted and lost at Arnmach before we moved on.

I was bearing in mind the good sport Callum Macdonald and I had at the plantation back in August, and we went there for a look. There was not another boat in the whole south west quadrant! What there was was fish. Feeding fish! Once again, there were black gnats coming out from the trees, and the fish were picking away at them. Even better: while the fish at the buoys and shear point were non-committal, these guys were keen as mustard! A size 14 pearly-wing black Bob’s bits did the trick for me. Eric went with a hedged bet of black hopper with a buzzer below, and he picked up fish on the buzzer.

The whole place to ourselves. Overcast with a nice light breeze. Feeding fish keen to take our flies. This was too good to be true… and so it turned out. About 3 or 4 fish into proceedings the clouds suddenly dissipated, the sun took control, the wind whipped up into a stiff westerly and the fish vanished like someone had thrown a switch. Aarghh!

We went over to Gateside to get some shelter from the wind and to see what was doing there. Other boats taking shelter was what… and very little else. After a bit we decided we may as well go back where we were, have a pull, and hope that things settled back down in time to give us a second bite at what we had before the end. We went with it, and were rewarded with a fish to a weighted black tadpole. And, in time, things did settle back, we got some cloud, we got some risers, we went back onto dries, and we put another 3 or 4 fish in the boat. As 5:15 came round, we had a fish last cast, and as it was being played we were seeing risers all about us. If only it was a Sunday 7 p.m. finish!

The fish we were catching up at the plantation were all residential, all in the 2 lb 8 to 3 lb class, were fit as butchers’ dugs and were taking the fly with an aggression rarely equalled. They were going off like scalded cats as well, the last one running 50 yards on the first charge! Superb stuff.

Elsewhere on the water, Ed Green and Dave Bertram had 12 in the boat to blobs on intermediates at Lochend, while guest Davie Tyrie had 12 to his own rod, to blobs on a mid-glass. 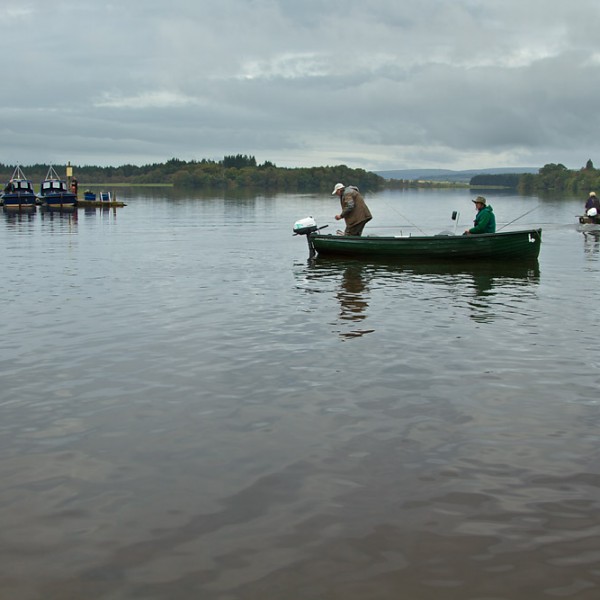 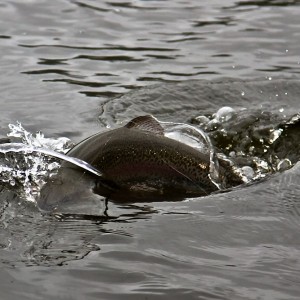 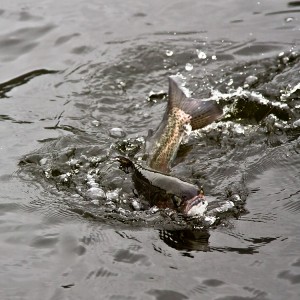 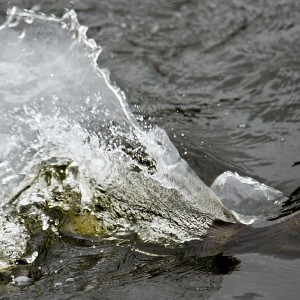 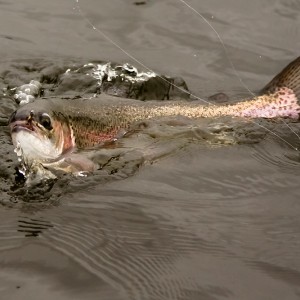 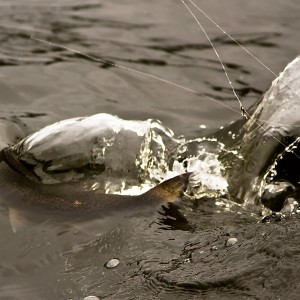 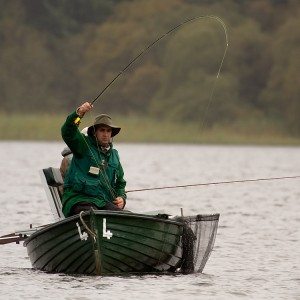 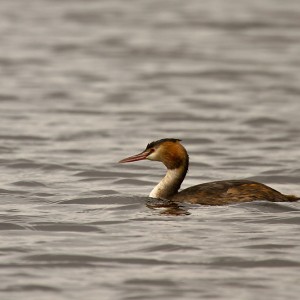 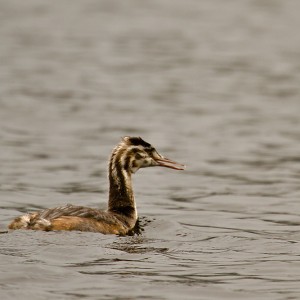 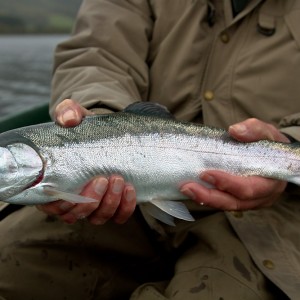 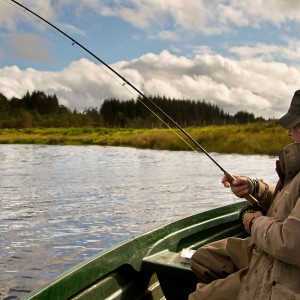 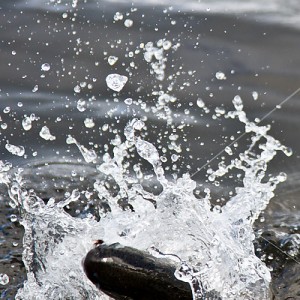 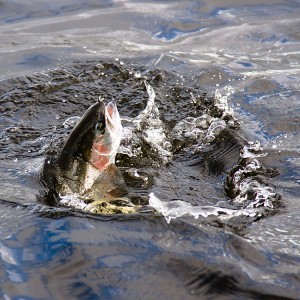 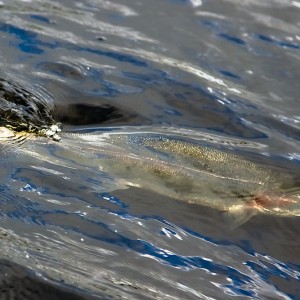 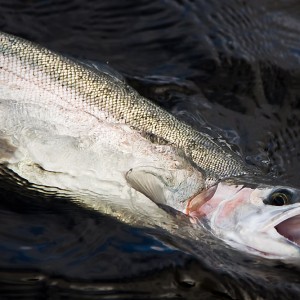 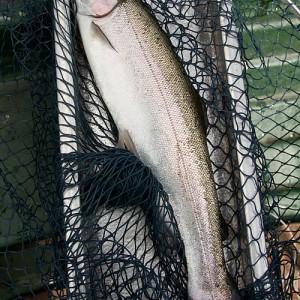 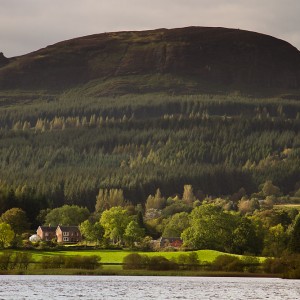 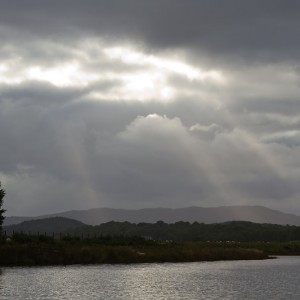