The sun was shining when we arrived at Menteith and the water had a nice ripple, a light wind blowing from west-northwest and cloud cover was coming in. Water temperature was 16°C, one degree above the air temperature, not so good but the air quickly went to 17°C – things looked as though we would have a productive day.

I was fishing with Derek Kilgour, and we decided to go with dries and start close in at Malling shore.  In fact, we started in Roman bay. Third cast, I had a fish on.  I had started with two yellow owls and a size twelve spent mayfly on the point.  It had taken the spent mayfly.  I was elated, until it dived into the thick weed and was gone. We continued to drift past the Malling burn.  I had another fish to the mayfly, and this time I even managed to get it into the net.  Derek also had two fish on this drift, both to yellow owls.

Then the sun came out and things changed.  We were both getting lots of fish looking at the flies and many offers, but lifting into fresh air.  After what seemed like a long time, we were drifting past Stable point and I had another fish on.  It had also taken the spent mayfly.  It dived under the boat and the beast then took my cast of three flies: the cast had snagged on something on the underside of the boat!  We repeated this drift a few more times, and I got another fish to a yellow owl.  Then both of us were back to the scenario of moving fish but failing to hook them.  As the area we were fishing was starting to get rather busy, we decided to move to pastures new, and headed for Sandy bay and Arnmach point.

We drifted Sandy bay, but the wind got up and shifted further north.  This was moving us away from the shore, so we moved into a bit of shelter at Arnmach point.  We saw a few rising fish and Jimmy McBride and Keith Logan, Jimmy’s guest, fishing the sheltered water, so we slipped in behind them.

We started to get offers, but just fresh air shots, so I changed my top dropper to a size fourteen-loop wing emerger.  After a few casts I had another fish. Shortly after, Derek had a fish of about, guesstimated, five pounds.  A good fish with a tail like a shovel, this fish had obviously been in the water for a long time. Then it was back to nothing but fresh air shots and as the wind had dropped, giving us a flat calm, we decided to move back to the Malling shore.

When we arrived, the wind had risen a bit, giving us a nice ripple again.  Derek was quickly into a fish, which had taken his yellow owl. Unfortunately, I was back to fresh air shots.  Changing to a four-fly cast of smaller flies helped me not a bit – nothing but offers and no hook-ups!

Every boat had fish, some boats more than others, and most of us were on dries.  The flies that were doing the business were daddies, Yellow Owls and hogs, with Cormorants and Diawl Bachs fished on the washing line also doing well.

Our best boat was Jimmy McBride and his guest – they had seventeen.  Other than a brief spell at Arnmach point, they fished the entire bank from Malling shore to hotel bay.

Alex Ramsay and John Miller had eleven to the boat, Alex netting eight of them. They fished the west side of Inch Talla.  David Tyrie had eight and his boat partner, Garry Heseltine landed four.  David and Garry had their fish near the buoys at Shear point.

We all had a good day, but we all thought it was tricky – must be the weather.

Next outing is back to the Lake on Monday 14th September – see you then. 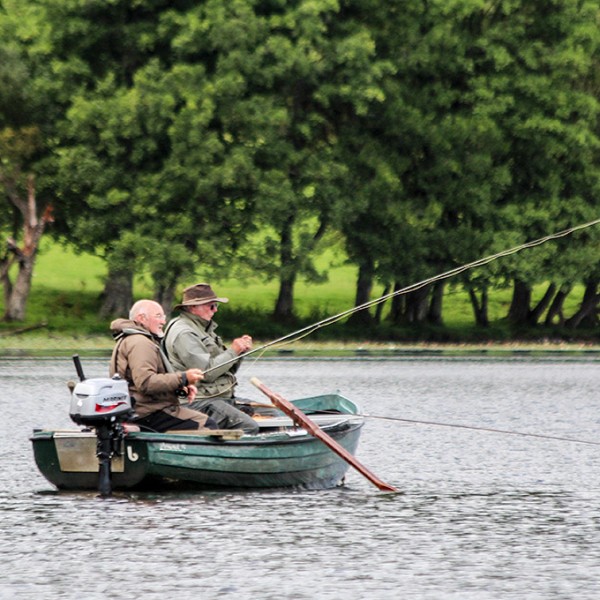 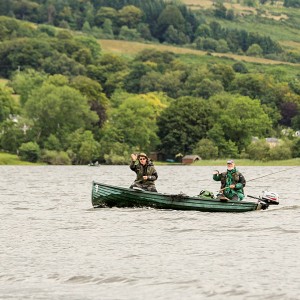 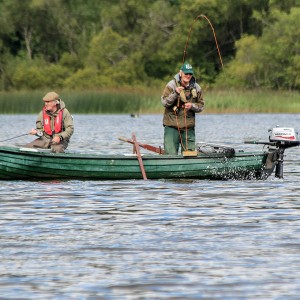 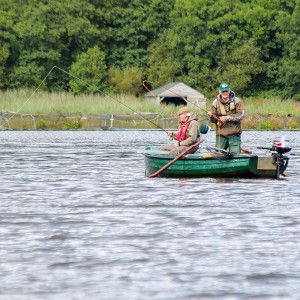 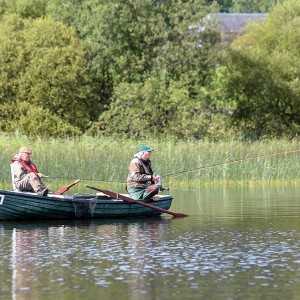 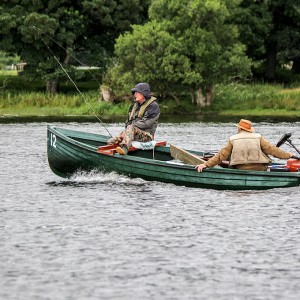