In time-honoured tradition, we continued not to be able to buy a good day’s fishing conditions for a trip to Coldingham. This one started cold, windy and brassy bright. In fairness, while the bright sunlight continued almost unbroken from start to finish, the breeze surprisingly dropped away at a gradual pace until it was almost calm at the end. Partly as a result of this, and partly as a result of the sun getting up, it wasn’t quite as cold later in the day, either.

The water was gin clear – like properly gin clear. In the bright sunlight that probably didn’t help. Stewart Barnes and I went out with dries set up to see if we could get something before the sun got high. Stewart had been out during the week and had had good sport on dries – it wasn’t exactly 100% ceiling then.

It all seemed a bit quiet early on. It was like the fish were having a long lie – maybe due to the cold night temperatures? We weren’t doing much, and we weren’t seeing the other boats doing much either. A couple of early fish landed (by the other boats while we were still tackling up!) seemed like a long time ago. We had a go anchoring up off the east shore and nymphing, but that did nothing. We took a new anchorage in home bay, and that was where Stewart started to spot fish rising out to his side – along the edge of the lily beds. We upped sticks and took a drift along the edge with the dries. We were seeing fish, we were covering fish, but we were getting ignored. What were they on? After a bit of time scanning the water, the answer was revealed… black gnats! I took the 12s off and put on a 14 sparkle gnat and a 16 black pearl-wing Bits.

That got a bit of action – not much – one jagged and one landed. However, at least it got us going. the breeze got up a bit at that point and put the fish down. We went for a drift with intermediates and damsels. Bingo! That fairly got things moving. We drifted all the way from the west arm, down to home bay where Bob Whyte and Bob Allan were anchored. They had had a turn in fortunes since the early slow spell, with the fish waking from their slumber and deciding that damsels were very much on the menu.

Very very oncey rises. Long range covers just weren’t accurate enough, or were too late getting onto them – you had to have a fish rise close to get on it well enough and quick enough. And the problem was that in the bright sun and gin clear water, they just were not rising close to the boat. However, any time you did get one rise close to the boat… he was having it! But, there were so few that would rise close… You weren’t getting many coming out the blue either… but a few did. Most of my fish were picking out the sparkle gnat!

I can understand why few of the other rods stuck with dries – most went over to the damsel method – and Bob Whyte in particular had a very good day with it. Stewart too, went back to the damsel, and he had a couple of nice brownies to go with the rainbows he caught.

The one boat to do its own thing was that of John Levy and Trevor Gibson. They spent the day at various anchorages and, after enduring the same slow start as everyone else, they got tuned in slow-fishing buzzers. John’s bag included a fish at 7 lb 12 oz (weighed then returned), although Derek Kilgour reported losing a fish at the net that he and his boat partner both put at well into double figures. 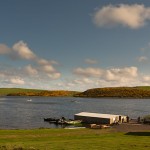 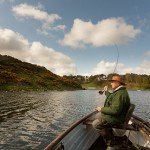 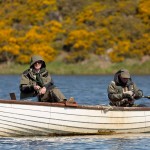 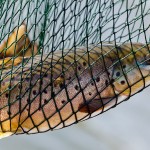 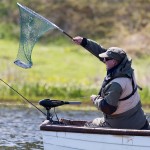 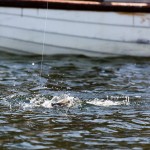 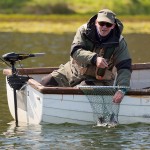 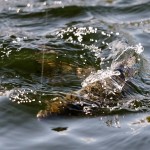 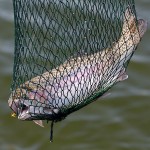 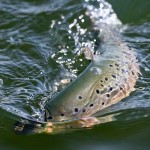 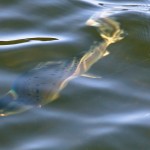 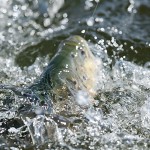 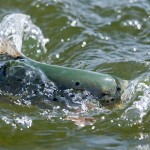 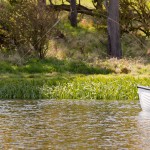 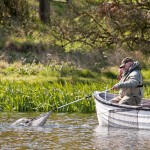 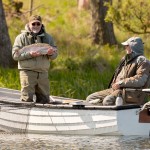 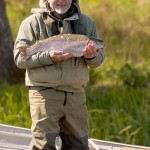 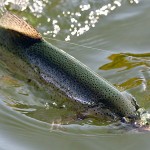 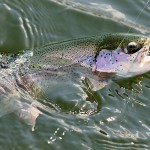 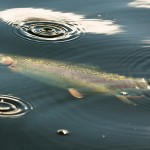 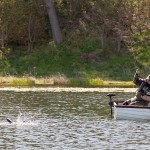 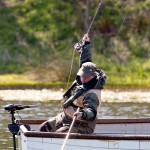 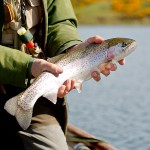 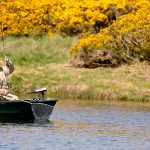 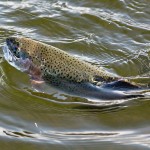 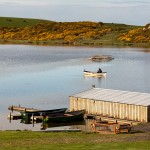