This was the first time I had been to Watch Water Reservoir, and on a very misty morning Hugh Thomson and I were on the road at 05:45 hours.  We met-up at Linlithgow Loch, before heading for Haddington, Gifford and then on to Longformacus, arriving at the Loch about 07:55 hours.  We were not the first to arrive… but I then had time to quiz a regular about his favourite drifts.  Dougie Goddard and I were fishing together, so in misty conditions we started on one of the suggested drifts. Dougie was on dries and I had on a midge tip with Diawl Bachs.  Dougie was getting interest to his flies but no takes. All of a sudden, I had a savage pull but then everything went slack – I am reluctant to tell you that my dropper had parted at the knot attaching it to the cast.  Drat said I – and changed my line to a floater with a wee loop wing on the point and an F-fly on the dropper.  Dougie was still getting interest to his Klinkhamers, but I got not one bit of interest to the flies I had on… so I changed my line to a DI3, with three mini lures, and used a fast figure of eight.

After about ten minutes I had just about enough of that – so back on went the floater – this time with a size 12 (Kamasan B160) pearly- winged heather fly on the point and a size 14 pearly winged heather fly, on a very carefully tied dropper.  Almost immediately, I got a nice overwintered rainbow.  Dougie was still on a floater coupled with nymphs.  At the end of the day Dougie had two and I had nine.  I have put this success down to three things – the first was seeing Dougie getting interest to his dries – this encouraged me to put the floater back on and ring the changes with dry flies.  The second thing was my new prescription polarized glasses – this on a very bright day, made a big difference – I saw gentle rises I would never have seen in the past and, as the majority of my fish came from covers, I know I would not have had as many fish if I did not have these specs on.  The third thing is just blind luck; I have noticed that this plays a big part in my fishing.  Dougie has suggested that his calming influence could have helped me – and he may be correct, as I did get a wee bit hyper after catching a few.

Bob Allan and Derek Kilgour were fishing together – both used floaters and a wide range of flies to boat nine fish.

Stewart Barnes was fishing with Eric Singer (I must enquire if Eric could supply me with a suitable remark – one that can be used when one suffers a dropper being pulled off by a strong fish).  Stewart was on dries and he landed three fish using CDCs fished static in the middle of the Loch.  Eric also used a floater – he had two, using a slow retrieve and a FAB.

Bob Whyte, also using a floater, got one on a black gnat and, yes, you have guessed it, one on a Kate.  His boat partner David Tyrie had four fish – David used a variety of flies and caught his fish all over the Loch.

Len Newby had a nice fish on a floater and a hare’s ear. Trevor Gibson had two.

It was a strange day – very warm and even when the mist lifted we were left with a slight haze for most of the day.  Fish were moving, but they appeared to be very skittish, and although they looked at the flies the were reluctant to take unless the fly was very quickly dropped onto their nose. 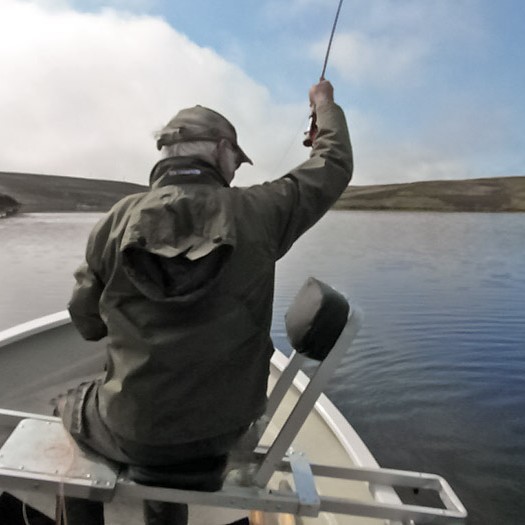 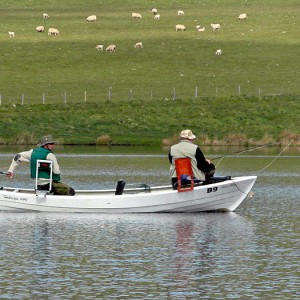 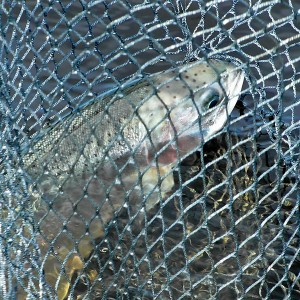