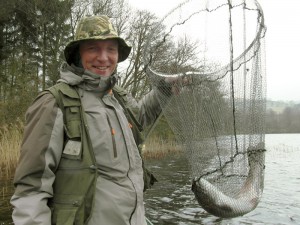 When we arrived at the Lake, it was windy and cold, but, hope springs eternal and it still looked, to an optimist,  promising.  After about an hour on the water, we were drifting in a very cold and blustery east wind. The air temperature and the water temperature were both seven degrees C – but it felt much colder than that.  The cloud base was down to the treetops and the day did not look as promising as we first thought. It was a day for all sensible robin red breasts to be sitting somewhere warm with their heads under their wings.  I did see an Osprey fluttering its wings: it may have been drying them, but I think it was shivering from the cold. The water was a bit coloured – possibly due to being stirred up by the wind.

I was fishing with one of our new members, Bryan Griffiths, who set out armed with a fast sinking line and a size 12 black buzzer on the point. I had a DI2 and a size 12 orange blob on the point. Our first stop was Sandy Bay. The plan was to escape from the crowds, and that we did – we were the only boat there and quickly found out why. Nothing, not even a pull.  We could see that Stable Point was quiet so off we went. We had one or two drifts past the point and along the Malling shore, where, on one of the drifts, Bryan was into a fish, which he landed.  Further into Gateside bay Bryan had his second fish, one of about three pounds 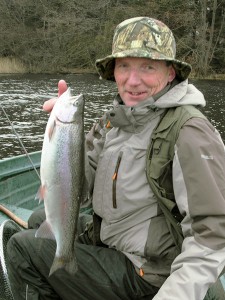 At this stage I had a choice: go in the huff or change something, so off came the orange blob and on went a size 12 black and green concoction.  Very soon after that I was into a fish, which I played for a good while before it came off. However I did start to catch fish and am delighted to say that it ended up a good day for Bryan and I – It is always a good day when you finish up with the same number of fish as your boat partner.

Mr. E. Morrison, the guest of Alan Duncan had a good day he finished up with three fish that weighed in at seven pounds.  Trevor, fishing blobs and lures, had five and his boat partner, Ian Macdonald had three. John Levy and John Miller also had eight. John L caught his using a floater and Diawl Bachs, while John M had his using a midge tip with a sunburst yellow fab on the point. Alan Brown and Robert Wallace had seven between them – Robert used an intermediate line and hare’s ear nymphs. Alan used a sinking line with an ace of spades.  Bob Whyte and Dougie Skedd had eleven to the boat – Bob used an intermediate line and various small boobies. Dougie used a DI2 with hare’s ear snatchers. Our best boat, by far, were Jimmy McBride and David Tyrie. They boated twenty-three fish at Lochend.  Jimmy used a sink tip line with Diawl Bachs and a Cat Booby.  David was armed with a 12-foot fast glass and Boobies.
The club’s fourteen anglers netted seventy-two fish – a rod average of 5.14 – a figure I would never have thought possible on the day.

Looking forward to Coldingham – it cannot be as cold as the Lake, can it?