After  looking at the Butterstone fishing reports I was not looking forward to it – I wanted to go fishing but did not want a repeat of last year when our rod average was over 10 – the Butterstone fishing reports advised that the rod average for the opening day was over 12. However when we started on a cold blustery day (water temperature 8 C the air in the morning was 6 C rising in the afternoon to 10 C) fish were not that easy to come by and when you did get one it was a strong full tailed fish of about two pounds.  The new bailiffs, Craig Brown and Lewis Cameron, told me that they had many complaints about the previous stocking policy and were aiming for a more challenging fishery. On the day, the fish were there but getting them to take was difficult and the Clubs rod average of 2.7 was in the end a very respectable result. However, trying to get a feel for next year’s outings and trying to find out who would return and who would not return failed to produce a consensus – some said yes and some said no – we will look at it again after the next outing to Butterstone.

Before going on to tell you about the fishing I must give you all a reminder about safety – this reminder arises because of seeing one unfortunate fisher, not a Heriot member, coming to harm.  This was a man who saw no requirement for a flotation device and who persisted in standing up as he cast – he was doing quite well until he started to sneeze and sneeze and sneeze and with his last powerful sneeze threw himself backwards over the side of the boat. Fortunately, as he bobbed up he managed to grasp the side of the boat and after much pulling and puffing his boat partner got him back into the boat. They then sped off to the boathouse for a change of clothes.  So learn the lesson – if you are going to sneeze – sit down. In addition, to be very safe – do not stand up to cast.

Hugh Thomson and his guest, Ian Rae, were fishing along the road shore – just south of the cottage – they both had a fish. Hugh had his using a DI3 with a white and green mini lure – Ian had his using an intermediate with a white fritz. Both fish were strong 2 ½ pounders.

Bob Allan was fishing with Dougie Goddard – Bob had two fish using an intermediate with black and green flies.  Dougie tried everything – but finished with two less fish than Bob.

Trevor Gibson was fishing with David Tyrie – David is a new member that can catch fish – Using a fast glass and at times changing to a DI3 coupled with Cat booby and cormorants caught and returned seven fish – this was a very good return on the day.  Trevor – I think the prudent thing to do is say nothing about his days fishing.

John Miller and John Levy were fishing along the road shore – Both were using midge tip lines. Both caught two fish on UV green damsels then John M had a third on a black and green tadpole.

Derek Kilgour and Ed Green were in the last boat. Derek was using a slow sinking line with black and green gold heads – retrieving with a fast fig of 8 he landed nine fish – I think this was a master class from our club champion.  I on the other hand using the same set up and system as Derek only managed to catch two fish – back to school (again) for me.

To sum up the difficult day – Cold and calm with nothing showing on the surface when we arrived so it looked like a pulling day.  We did see a few buzzers hatching in the morning – but they quickly disappeared as a cold blustery wind got up. We did have a fifteen-minute calm spell and during that time fish were feeding at the surface. Then the wind got up again and that was that. 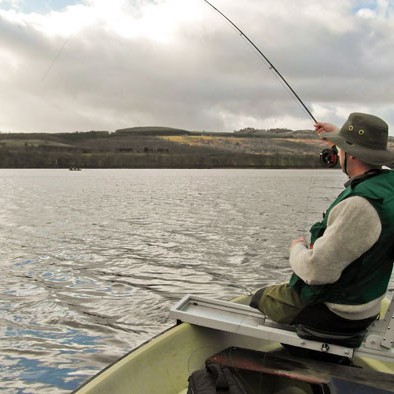 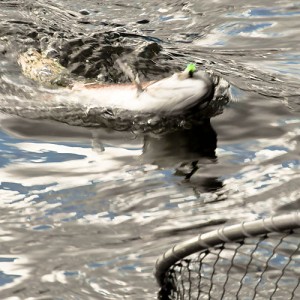 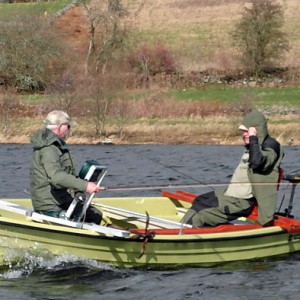