For our first outing of the season, we had much better weather than we did in 2013. I am sure that everyone who had put down for this outing would be remembering the day we had at Glencorse last year: the numbing cold, the white-out, the stopping at lunch-time and the hardy angler who stuck it out until he caught a fish.  We had no such 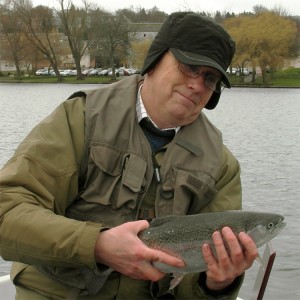 trouble this year, although the wind was a tad strong and blustery. It was still a pleasure to meet up with friends and get out on the water.

Linlithgow has never been kind to me; perhaps I never do well as this is exactly what I expect, so this year I decided that I would do exactly what I had observed successful anglers do at this venue: that is tie on three buzzers and fish them under a bung!  I was fishing with Robert Wallace and we had to hang about the boat house until just after nine – so we were last out and all the other boats had parked along the shelter of the trees at the west end of the loch. Robert and I put the anchor down as close as we could reasonably go to this flotilla. After about ten minutes a powerful fish hit Robert, who was fishing a Cortland blue and a wee orange lure he had tied up the previous Tuesday. It then ran and ran for ages, but when he got it almost into the net the top section of his new rod broke at the tip, he grabbed the line but the fish was gone. I recall he said, bother, my spare rod is in the car. So back to the dock for us.

As I sat waiting for his return I thought, I have had enough of fishing buzzers under a bung, so off came my floater and on went a DI3 with three wets. We set out again – by this time the wind had got up and was blustery so we decided to stay at the west end, but close in to the north shore. First cast I had a fish on, but it ran straight under the boat, then wrapped my cast around the motor and was off to fight another day. However, it proved that fish were about. Robert and I then proceeded to pick up ten fish between us and we lost about twice the number that we netted. After lunch, the fish just switched off, so we moved about a bit, trying to locate them to no avail. We then noticed that most of the boats had gone in. This made us think that no one else was catching, so in we went. 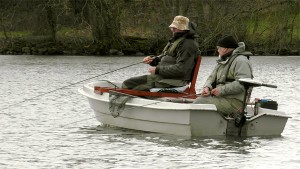 And the others, how did they do? Well was the answer. Trevor, fishing buzzers, Jimmy McBride, fishing a Cortland 7 foot midge tip with damsels and black & green flies with a fig of 8 retrieve, Derek Kilgour using a fast glass with a black Howwood & ace of spades and David Bertram with an intermediate and I think wee orange things – they all had twelve fish each.

Alan Holbrook and Bob Whyte had eight each. Bob Allan had six and John Levy had a super overwintered fish of four pounds.

Our eleven members landed 87 fish, 62 of which were returned. The 25 that were taken for the pot weighed 79 pounds exactly. Our rod average was 7.55, which is a good start to the season.