It seemed improbable at the outbreak of Covid and lockdown restrictions that it would take 2 years before we could be back to enjoy our traditional first outing of the year at Linlithgow. The weather at this time of the year is always a bit of a lottery, however this year it was a stunning start. Probably not ideal for fishing, with the sun splitting the sky and not a cloud to be seen. But even with a modest south-easterly breeze you most definitely needed a few layers to start off.
It was great to catch up in the car park and see everyone after the closed season and the craic was, as usual, fairly rich. Catch reports from the fishery were mixed, with a slow start from opening day. But signs were that fishing was improving as the water was heating up. It sounded like Di 3 to intermediate lines had been the go-to lines, with a range of lures doing the damage. The usual black/green patterns in particular were picking up a few fish. What was a touch disappointing was that the water clarity was still not great and not what you would expect to see in March.

I was paired with Trevor Gibson, who had already loaded the boat and had an impressive new outboard motor. Unusually, I was directed to the sharp end by the captain for the day. Trevor has fished Linlithgow Loch for many years and few in the club know the water as well as he, so I hoped he knew all the hot spots. What is good about the start of the season at Linlithgow is that most areas are accessible, so the boats are more widely spread and not always bunched and anchored around the main basin.
Trevor started on the Di-3 with some unusual scary green/black lures that I didn’t recognise. I opted for slow intermediate, with a washing line set-up, mixing up the colours a bit to see what might work. We headed east and set-up in the shallower water in Peel Bay, close to the park. It was a slow start, but there was an encouraging flurry of small adult midge around. We landed one fish in that area, before heading further up the water, in behind Cormorant Island. There were a couple of boats already working around Hatchery Bay. By this time the temperature was picking up quickly and it’s not often that I’m looking for the sun cream at this time of the season. Action was hardly frantic, but we slowly started to pick up some more quality fish. Trevor was chopping and changing patterns and flies. I doggedly stuck to my starting cast.

By early afternoon we were on a range of mini-tip lines, thinking the fish might have come higher in the water. We had some nice drifts along the north bank, but to no avail. By this time a lot of boats were heading in our direction, and we saw a few rods bending to a variety of tactics: a few twiddlers and a few pullers all having occasional success.
We finally headed back into Peel Bay, which turned-out to be a good choice as we picked up a few more fish in that area. No surprise, but our most successful flies were various boobies, Diawl Bachs, and cormorants. We ended with 9 fish to the boat, and the club recorded a total of 21 fish across 11 rods. Special shout out to both Peter Fionda and Mel Mitchell, who landed a good pike each. Just great to be back out fishing. 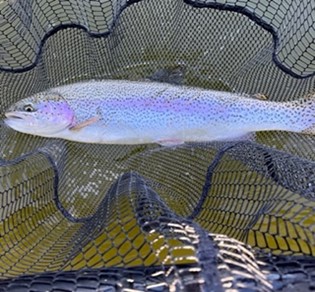