It’s July and we were sitting in boats on Linlithgow Loch, cold, damp and looking forward to four o`clock. We had a west wind that was cold and blustery; we had bright sun and some cloud cover. The air temperature was only 12 Celsius and with a water temperature of 16 Celsius, we were in trouble from the start. Looking at the water close to the car park, it was clear, so I had tackled up with a floater and three nymphs.  I started close in under the palace, but the water was turbid there, so after a few casts and expecting nothing, I moved to the middle of the main basin. In desperation, I removed the floater and changed to a DI5, then I removed the cast and changed to an eight-foot leader with one dropper.  On the point I had a skinny candy booby, and above it I had a yellow dancer booby, both size 12s.  After about an hour I had a fish on the candy booby, a fly I had blagged from Garry Heseltine.  Fortunately, the fly was in the scissors and I had no problem getting it out.  Then I thought that I was lucky that the fly had not been swallowed, so I decided to take the boobies off, but I had no inkling as to what to put on.  So, I reverted to my floater and thinking that dries would not work I tied on a cast of crunchers and cormorants.  To my surprise, I started to get pulls.  I had one on for a few seconds, then I netted my second to the point fly, a black cruncher.  Then a third and a fourth came to a green cormorant with a black rib and holographic green cheeks.  Trevor and John Miller were fishing just to the right of me and when they asked, “What are you getting them on?”, I told them and they changed and started to get fish, some of which resulted in long range releases!

Just to prove what a fascinating thing fishing is, Derek Kilgour, Gary Heseltine and Keith Logan also had four fish each.  Derek caught one using a floater and buzzers and three using a DI-7 with orange blobs.  Gary got his using boobies and Keith had his on a DI-3/mid glass, plus pearl cormorant and blobs.  Having given these results some thought, I have concluded that I have not the slightest idea what it tells me, other than there must be more than one correct answer.

On the day, our nine rods found it difficult, with only 21 fish between us.  However, next Saturday evening on Frandy might see better weather and better results. 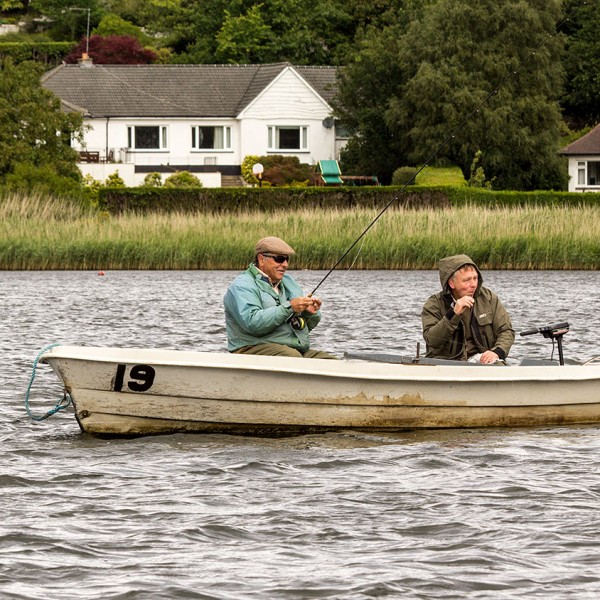 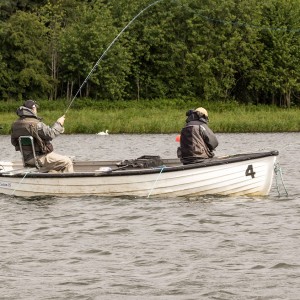 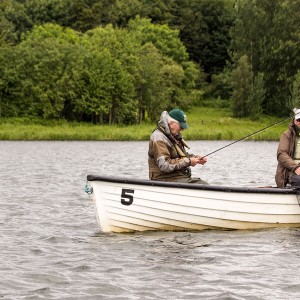