The day was typical in several ways, and untypical in one or two very important ways too.  Typical, in that many of the wettest days I have been out fishing have been on Menteith, and this was a doozy.  It stopped for about 15 minutes at one point in the afternoon, and the rest of the day it was pissing down.  We had to bail the boat twice in the morning when it was heaviest.  Typical too, in the number of times the forecast has made it look as if we might not get out because of the gale-force winds forecast, only to find that the wind was anything but gale-force.  For much of the day, you couldn’t have asked for a better wind strength for fishing nymphs, dries or other rainbow tactics.  Typical also, in the appearance of a great hatch of small dark buzzers.  The surface of the water was peppered with shucks, still-borns and hatching buzzers for the whole morning and into the afternoon.

What wasn’t typical (for March in the pouring rain) was that as we motored up the water we were seeing rising fish – here, there and everywhere.

I was out with Stewart Barnes.  We were motoring up the water, heading for the south shore, when we spotted the risers out in the middle. We simply stopped the boat where we were – two or three hundred yards out from the road shore – and started fishing.  Stewart was on a slow intermediate and I was on a floater, to which I had attached a sinking poly-leader.  On the end I had Diawl Bachs, with a black snatcher on the bob.  Stewart had a slow intermediate and nymphy stuff on.  We fished our way in to the shore with just a single missed touch to Stewart to show for it.  With so many fish rising, and obviously high in the water, I took the sinking poly-leader off, and just on the shoreline I picked up our first fish, to an organza Black Diawl Bach.

We repeated the drift for no addition to the catch.  We felt we should be doing better, given the number of risers.  Tradition told me that rain above a certain intensity makes it very difficult to catch fish on dries.  But we had to give it a go.  The only problem was how to rig-up without getting the rain into everything.  I decided the path of least resistance was simply to take off the nymphs and tie on some dries: see if it got any response – and take it from there.  I had a Hi-Viz orange line connected directly to 5 feet of heavy fluoro, connected to 15 feet of 7 lb fluoro.  Not something I would dream of as a basis for dries, but that had to do.  I opted for something that would stay afloat for at least a while on the fluoro – three size 12 half-hogs.  They also allowed me the chance to figure-of-eight them in case the fish would not take static flies.  Stewart also changed to dries at this point.  We were good to go with round 2.

Success!  The first one actually took the half hogs while figure-of-eighting, but thereafter it was a case of dropping them in the path of a fish that was rising regularly and letting it take static.  It wasn’t fish a chuck stuff, but we put a decent bag together over the next few hours. Most of the fish were last year’s stock.  What made it tricky was the sheer number of buzzers, shucks, stillborns, etc in the water that the fish had to choose from.  Our flies were lost amidst all the real food – and the disturbance of the rain wouldn’t have been helping.  I think that’s about the best I’ve done with dries in rain of that intensity.  Wherever we were, when the fish went a bit quiet on us, we moved the boat, and every time we did, we found more rising fish to throw at.  Along the road shore, International Bay, the shallow corner at the reeds on the shoulder, out in the middle, The Butts, Tod Hole, and half way between Tod Hole and Kate’s Brae.

By about 3 o’clock the buzzer hatch tailed-off, and the rain eased, but that allowed the wind to pick up and the freshened air caused the temperature to drop… and that put the fish down for the day.  I picked up the pulling rod for the first time as we drifted the road shore on the southerly breeze.  Stewart changed to pulling stuff as well.  We ended-up finding some stockies tight to the reeds in International bay, and that gave us a wee bit of fun to finish-off the day.

Among the other boats, Dougie Skedd and Ed Green went with the ‘unexpected dries’ approach to take half a dozen in the Arnmach area, and Bob Whyte had a couple to dries in his bag of 4.  Derek Kilgour was another to go with dries, taking 7 to a quill CDC, in open water.

Davie Tyrie and Alan Martin had 13 to their boat, fishing DI-3 lines, out from the Butts to the middle of the water.  Davie was on jelly blobs and a candy booby, while Alan was on crunchers.

Top boat, with 15, was Keith Logan and Bob Allan, fishing ghost-tip lines in the Butts area.  They used an assortment of Diawl Bachs, boobies and a Kate McLaren, slow figure-of-eighted. 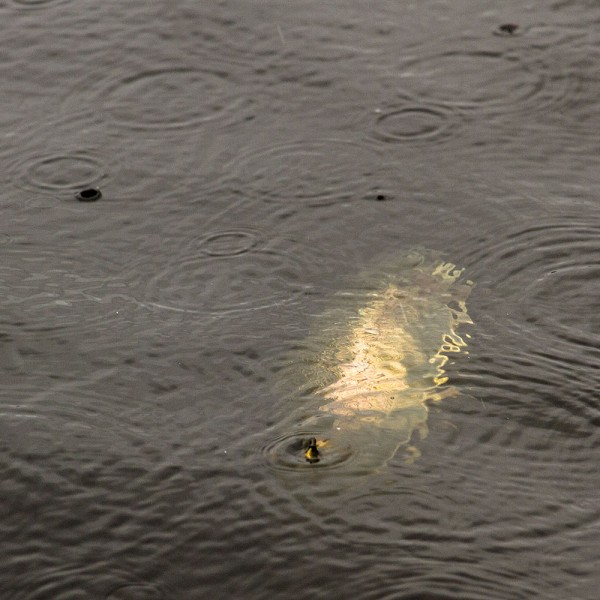 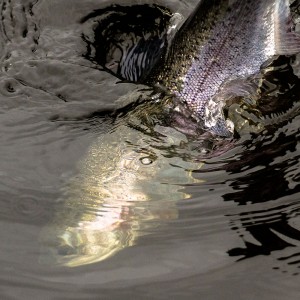 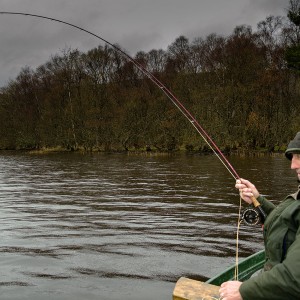 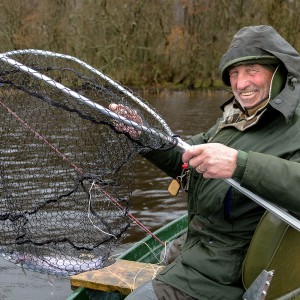 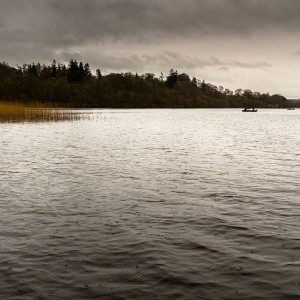 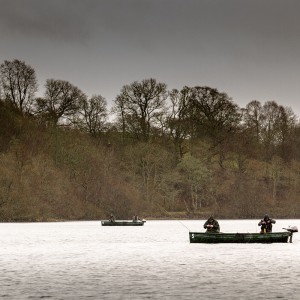 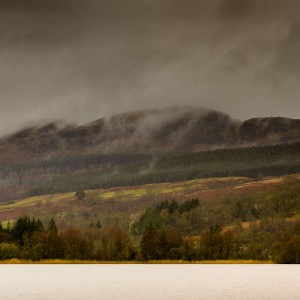 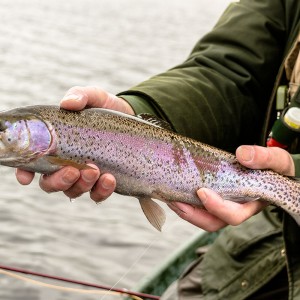