Mayfly season at Menteith, and perfect conditions for fishing dries – a mix of flat calm and pin ripple most of the day, with largely decent cloud cover.  So, it was a wee bit disappointing that Bob Whyte and I didn’t find more rising fish to throw at over the course of the day.  It seemed to be a case of almost any of the usual spots holding fish, but visit them at the wrong time and it seemed devoid of life.  Visit at the right time, and the spot would be alive with fish… but get them quick, coz they aren’t going to last!

I took us up to the Plantation at the start.  Light easterly.  Got off to a decent start with four fish between us, all to covers.  My fish were on the paraloop spinner on the tail.  We both fresh-aired a few and I dropped one.  The fresh-air shots are all resulting from the dropper at the moment – for me, anyway – it’s like they are feeling the leader as they take it and aborting the take at the last second.  I seem to need them to go for the tail fly to get a confident take, just now.  The breeze was coming and going and changing direction.  It ended-up messing us up and the fish kind of went off on us anyway, so we took a wander.

There was a mass of boats stretched out across the Malling shore area, so we came back to look at Sandy Bay.  Looked dead.  So, we had a look between the islands.  Found a bunch of fish at the potamogeton bed behind Inchmahome that had been posted missing up until now!  I managed to pick up 2 – paraloop spinner again.  This was about the time we were seeing a few mayfly duns hatching.  Then they went off on us!  The wind, such as it was, was now westerly.  We worked round to the south end of Inchmahome and came up behind Dougie Skedd’s boat.  We could see fish in the gap and going eastwards in the open water.  Harks back to the day I had a couple of weeks back when the fish I was looking for at Inchmahome ended-up being out in open water, rather than down the weed beds.  Bob then hooked a good LRC (long-range cover) that turned out to be a lump.. but fell off mid fight!

We followed Dougie’s boat down and out over the open water.  We saw Dougie lose one due to standing on the line and then he landed one, just ahead of us.  We were seeing a load of fish about now, but making nothing of them.  An occasional fresh-air shot was all.  I took off the mayfly stuff (unheard of for me in June or July!!!) and went for a black hopper and a ginger crippled midge.  They did nothing too!  Bob also tried a change, with the same success rate as me.  We came back and had a go at Arnmach.  Again, an area that has been dead, but here we found a bunch of jaggy tails cutting through, ahead of us.  We did nothing with them either!  We went round to have a look at chicken-leg and the Butts.  They were deader than a dead thing!  And the thing was, there was a load of mayfly spinners on the water – most I’ve seen this year… all just lying there, not being eaten.  I did see Caenis in the water in the morning, and wondered if they have been getting a feast of Caenis in the evenings and that is why they are not much fussed during the day?

We came back and looked in at Sam’s Point/Hotel Bay, as Dougie had mentioned he had been in in there and found fish.  (He also said he started at Shear Point and had scrot-pickers, and had also had mayfly feeders in Sandy Bay in the morning.)  Nothing to keep us at Sam’s Point, so we headed up, looking for signs and ended up at the Malling Shore.  What a difference from the morning!  In the morning it was Piccadilly Circus.  Now we had it to ourselves!!!  Hardly another boat in the western basin!  But never mind that – we were seeing risers!  Light breeze from the west, and fish rising.  Well, they were not easy.  Nothing OTB, and only one in quite a few were giving you a look.  By now, we were back on mayfly stuff.  I managed to pick up 2, both to the paraloop spinner (had all my fish on it) and both from LRCs.  Bob had one to a LRC.

Darrell/Keith: It was a promising day at the opening, with warm overcast conditions, although far too little wind for my liking!  Water conditions were fairly typical for the time of year – slightly coloured – although water temperature was still cool.  We are in the height of competition season, so the Lake has been getting fished hard, both during the day and evening sessions. There was plenty talk of fish holding up toward the Malling Shore and not much else.  We thought that this is where most of the boats would head – either that or into the deeper water at the cages.  We headed out and decided to chance our arms in the open water, a few hundred yards out from Shear Point.  I set up on dries with daddies and Midas, while Darrell set up with washing-line and midge tip: orange Fab, buzzer and Diawl Bach.

We were encouraged by a few fish rising confidently, but at what we could not see.  I picked up the first fish to the tan daddy and it was a lean, bright quality fish.  At this stage, there were some good fish moving, only interrupted by bouts of boat pressure.  Darrell changed to dries and put a size 14 grunter on the point.  This turned out to be a very good move, as he immediately hooked another quality rainbow.  We slowly drifted in as far as reedy bay, where again there were fish showing, but they were being choosy.  I switched to mini-tip with candy booby and cormorants and quickly picked up another good fish.  This proved another false dawn.  By this stage, Darrell was getting some interest to the grunter, but the fish were not always easy getting them to the net.  We huffed and puffed for the remainder of the day, having a look down the road shore without much success – albeit for a superb Pike to a size 12 cormorant!  We finished with 8 to the boat, which was a decent result, given the testing conditions.

Mel Mitchell and I were salivating at the prospects on Sunday, but the reality didn’t match the expectation.  Although the conditions looked about perfect, the surface looked like it had been recently vacuumed and nothing was rising.  We spotted a couple if fish at the reedbed beside the jetty and moved in on them.  The only food we could see were some bits of Caenis.  I started with a small sparkle gnat, normally a good option for Caenis, but Mel’s washing line brought an immediate fish.  I was being ignored.  The fish soon went off there.  We moved on into Sandy Bay.  A few greendrakes were lifting off but very little was showing interest.  A fish came blind to a half-hog on my dropper, but that was it – and no chances presented themselves.  More moves saw us between the islands, at Malling, in Gateside, all for no result.  A further move into Portend Bay saw some fish moving and a quick trio came to the boat, then it died-out too.  Into the Butts brought another fish, but nothing more.  Another grand tour brought us to the gap, where we found rising fish.  Two more to the boat and one that broke when I stood on my line. Bother!  We got crowded out a bit, so another grand tour, but nothing to see, so back to the gap and another fish.  Then it was all over. Nine to the boat. Not bad on a tough day. 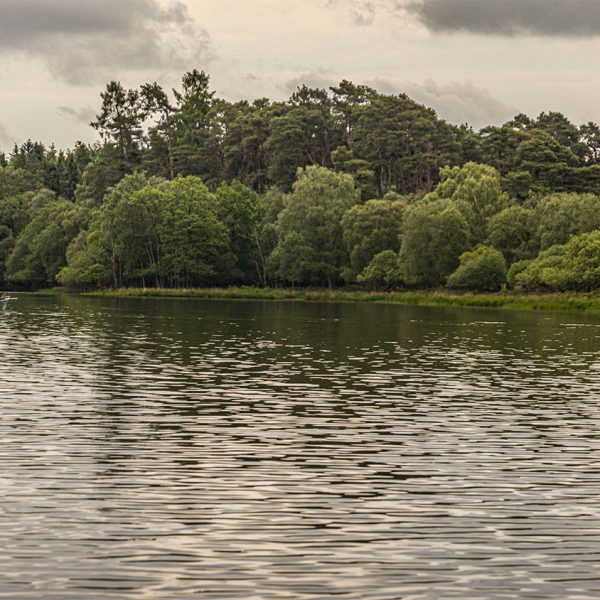 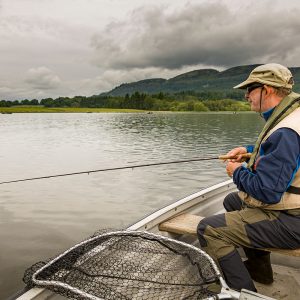 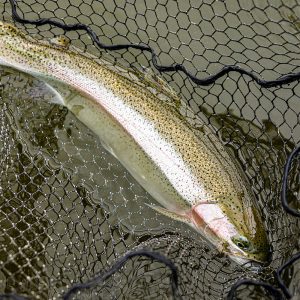 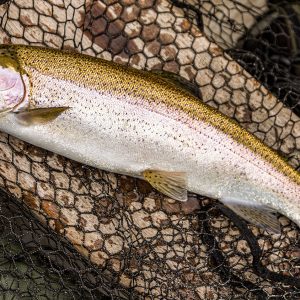 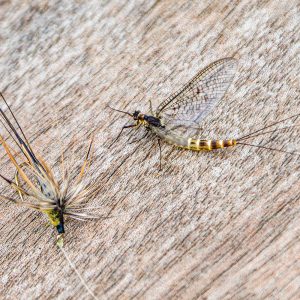 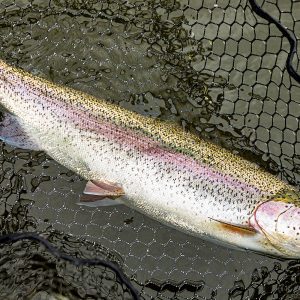 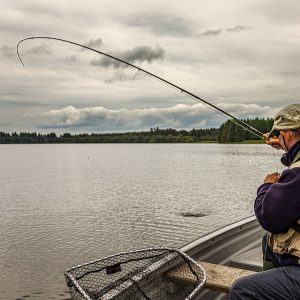 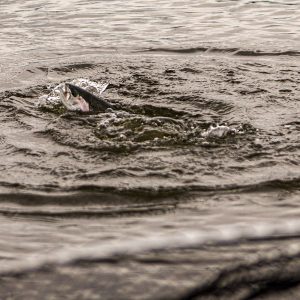 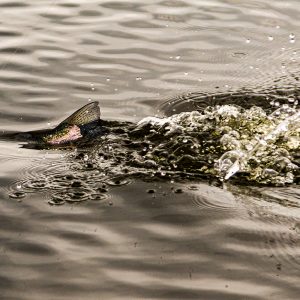 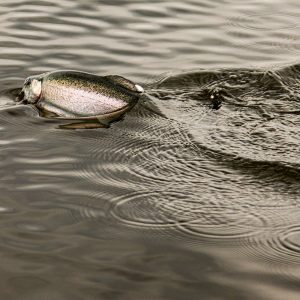 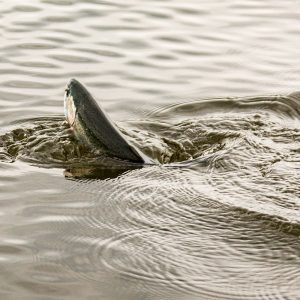 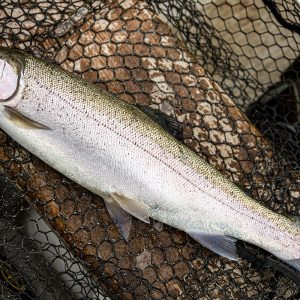 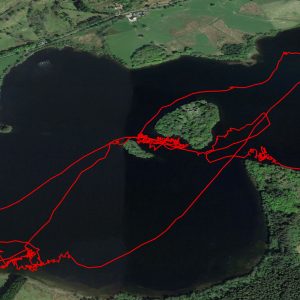 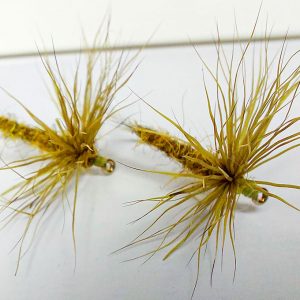