The day started with us all having to use alternative routes to get to Frandy, as the road is closed at Glendevon to carry out the long-awaited repairs to the bridge over the Devon.  Alternatives all a bit of a 3-day camel ride.  Most folk went via Stirling and the A9, though Matt seemed to carve out his own scenic route.  A late call-off resulted in making a few changes to pairings to avoid the more senior members needing to start the Tohatsu Calor-burning outboards, which can take a bit of a pull to get going.  Happy to say our one was great – as good as, if not better than most 4-stroke outboards.  Dougie Skedd volunteered to be Billy Nomates for the day.

The day was distinctly cool for mid-May, with a fresh breeze that veered about a bit between west and south.  Cloud cover was good, if a wee bit dreich right at the end of the session.  When the odd blink of sun came through, it was quite welcome to get a bit of much-needed warmth in the air.

At the start of the day, it did not look promising for fishing dries, and Dougie Goddard and I both started on washing line set-ups.  We started by simply taking the boat round from the harbour and setting up a drift to come off the south shore and heading down towards the dam.  What a start!  I moved a fish to the FAB on the point, first cast.  Second cast, I got a pull from a fish, and 3rd cast I hooked a fish, which fell-off at the net!  There must have been a rake of fish close in to the shore, because the 3 bank anglers were sconing them all day.  As soon as we drifted out, we were out of them.  I did get a pull out in open water, but it was only when we got down to the dam corner on the north side that we were back in among fish.  I picked up fish to the FAB, while Dougie had one to each of his droppers: a cormorant and a Diawl.

It slowed down for us after that.  We tried further up the water, trying to drift the mid-section south shore.  The wind was making it tricky, as it was trying to be southerly, but the hill was in the way, so we were getting swirly cross winds.  However, we were seeing a few rises and the conditions looked good for giving dries a go.  We both went for it.  I re-rigged with a floating line and 3 sedgehogs on fluoro, so I could mix up fishing them as static dries and give them a figure-of-eight and a bit of a pop-up.  Almost first cast, a fish took me static.  A bit later, I caught another, giving them a figure-of-eight.  It was about this time it got really tricky, trying to fish near the south shore – wind coming every which way… so we decided to do a zig-zag of the north shore.

I should have reeled in first.  As I turned the boat to start the drift, my cast of hogs came behind me and caught on the back of my waistcoat.  I took the waistcoat off to get them out, but the boat was now drifting onto the shore, so I started the outboard again to pull out.  Somehow the wind had blown my line over the front of the boat while I wrestled with my cast and it caught the prop, which then wrapped up several yards of line, plus the whole cast, which I didn’t even know was now free from my waistcoat!  I quickly cut the motor before it got worse.  I’ve just gone from the south shore with easy landing (if you need to get out and unwrap a line from a prop) to the north shore, with all steep-sided jaggy rocks.  Aargh!  So, I had to clear the decks and get the oars out and row all the way back where we came from.  I had 3 layers on due to the cool breeze… so by the time I got to the south shore, I was burning-up!

Got back to the south shore and started to unwrap everything.  I had been thinking, at least my dry fly line is just about on its last legs – I’ve got its replacement sitting in a drawer, at the ready.  I was more concerned about my Orvis furled-type leader, as you can’t get them anymore.  And I’ve had that one for many years.  I started by cutting the 3 flies off, and then peeling the coils off.  Amazingly, as I removed it all, the only damage done was one fly was opened out!  I could have tied the flies back on and resumed fishing.  However, to be on the safe side, I changed the leader.  The whole incident actually did me a favour.  I had been fishing the hogs on fluoro, and felt I wanted them to stay on top all the way back when F-of-8-ing them, so I re-rigged with nylon.  I also went with 2 hogs on the droppers and a foam-body beetle-come-terrestrial, mini daddy type on the tail.  That re-rig really improved my catch rate over the fluoro set-up.  There were wee spells of them liking it static, interspersed with spells of them homing-in on it figure-of-eighted.  Dougie had some action too, including a couple of nice wee wild brownies.

We tried the top end, but it seemed very quiet – no wonder there were no other boats there!  We came back and did the south shore to north dam corner from the morning.  That put us back in among the fish, and we had sport to the dries to the end of the session.

The Club’s 11 rods landed 70 fish, for a decent 6.4 fish per rod average.  Best rod by 1 went to Peter Fionda with 12 fish.  Peter fished a washing line on a 6 ft slow tip, with candy booby, Kate snatcher and orange foam daddy. 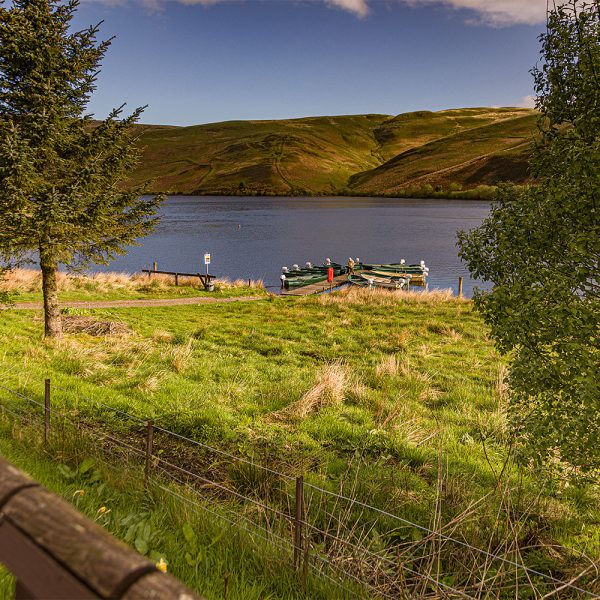 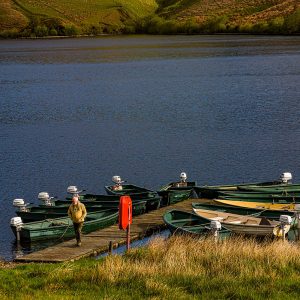 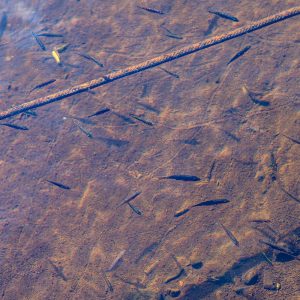 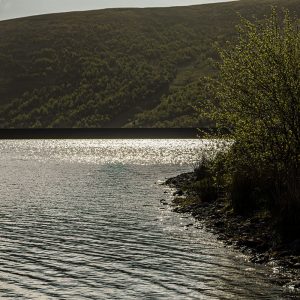 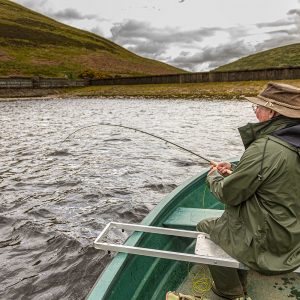 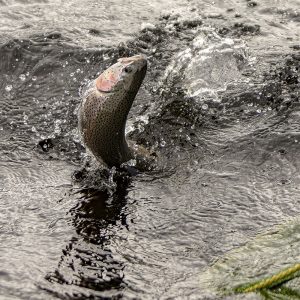 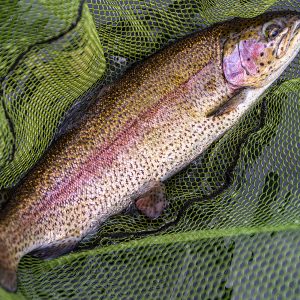 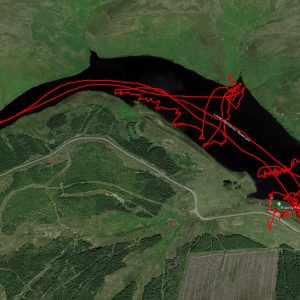