The clocks have gone forward!  An hour less sleep, but surely a sign that spring was on the way.  Then the car thermometer hit -0.5C on the road down, reminding me it was still March… just about.  The day was obviously going to be a cool one, so plenty layers on.  However, it was bright and the sun was doing its best to get a bit of warmth into the air.  It wasn’t windy, either – just a light north-easterly coming in, over the cliff-tops.

A look out over the water said, “Never mind it’s March, sunny and almost freezing – there are fish rising all over the loch!”  Stewart Barnes and I had no second thoughts – on went the dry flies for both of us.  I have been giving a resurgence in use to a favourite from the 90s – the suspender buzzer.  I put one on the tail, plus a ‘Pinkhamer‘ (Klink with Hi-Viz wingpost – not for the fish – it’s so I can see it these days!) on the dropper.  Stewart went with a Klink and an F-fly hopper.

At the start, we were seeing plenty rises but not getting much interest.  A look at the water surface showed the fly they were on was tiny.  However, a change to a tiny sparkle gnat didn’t improve things.  Suddenly, without us doing much, the fish changed their minds about our offerings and we started to catch a few.  I had a couple on the suspender, and Stewart to the Klink. Then came another period when they were hard to interest.  The rises were very oncey, and covering them was really bringing no rewards.  First I replaced the sparkle gnat with a size 14 Bob’s Bits.  We were seeing decent-sized buzzers hatching now.  As the buzzer numbers increased, so did the rises – there were fish all around us.  I took the sussy off and put on a size 14 Adams hopper.  Immediately this made a big difference, and I started to catch – all coming to the Adams.

As the day went on, we worked away at the buzzer feeders, even getting some response to fish we covered.  Early afternoon, the breeze got up from the east and the “wind chill factor” reminded us where the word “factor” comes into play.  We reached into our bags for our last remaining layers as the buzzers tailed-off and the fish stopped rising.  But, just as it was looking like we might need to put up the other rod, the cavalry came over the hill in the shape of a fall of cowdungs.  Hurrah!  We are saved!  The fish kept on rising, though they were much more spread now.  The buzzer action had centred on the north east area of the main bowl, but now we were working our way down the wind and into the west arm.  We continued to pick up fish.  The Adams hopper continued to work well enough for the cowdung feeders, so I left it on, but paired it up with a hare’s-ear half-hog on the dropper.  This was a good move, as finally I started to catch a few on the dropper.  Stewart was getting them coming to a brown mini-daddy type at this point.

About 4 o’clock, the cowdungs tailed-off and the fish finally stopped rising.  We both wondered whether it was worth changing to anything else with just an hour on the clock.  Stewart decided to stick with dries.  I decided it wasn’t worth putting up the other rod, but I took the dries off and put a couple of nymphs on with a small weighted damsel on the tail to bury it in a bit.  I put an orange-tag GRHE on the cast, simply because of the way my successful dries were both hare’s ear-bodied ones.  And I just figure-of-eighted them. I was pleasantly surprised when this set-up worked a treat, and I picked up 5 more fish in the last hour with it – 4 of them picking the GRHE out the middle of the cast.

There was a wide spread of catches and techniques used among the other boats.  Bob Whyte had 9, with 6 coming to a dry fly (pearly-winged black gnat) and 3 to a sink-tip and damsel.  Ed Green fished dries at anchor, taking 6 to yellow owls (mix of static and slow retrieve).  Trevor Gibson and Gary Heseltine had 11 to their boat, with Trevor fishing a washing line and Gary fishing buzzers on a floating line.  Keith Logan had equal best bag of the day with 17, taken to a variety of methods and patterns, including cormorant, snatcher, damsel booby and black spider. 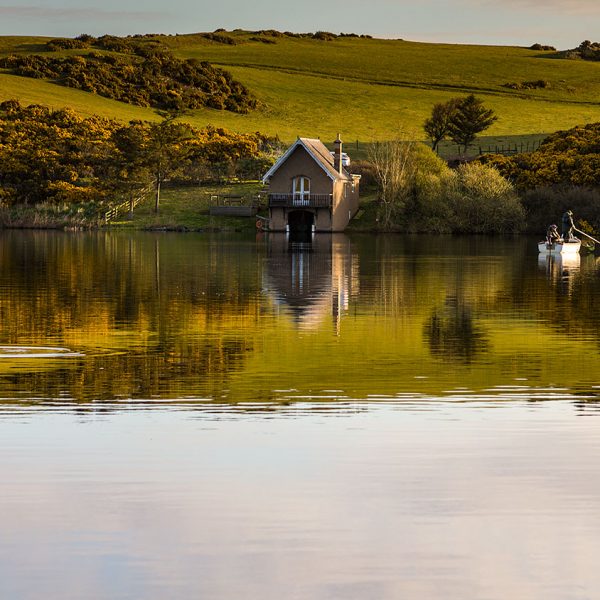 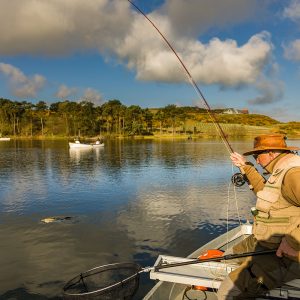 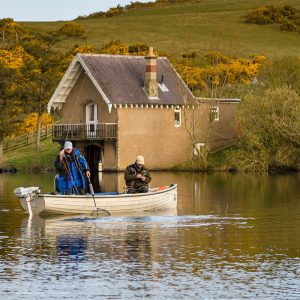 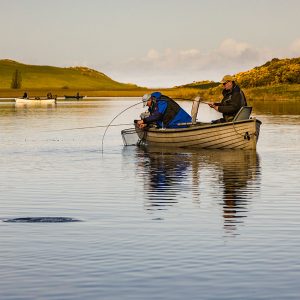 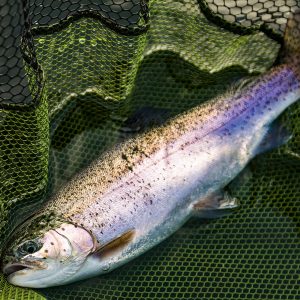 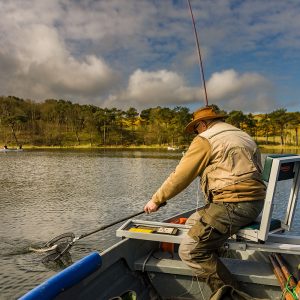 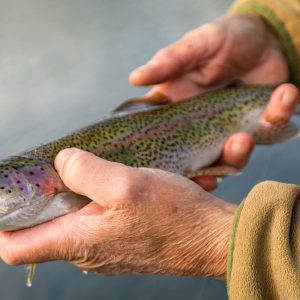 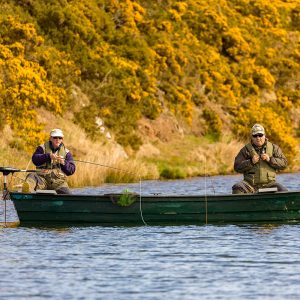 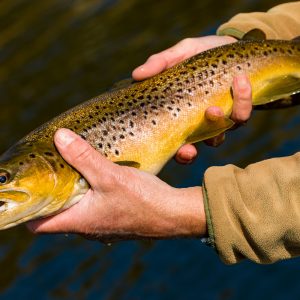 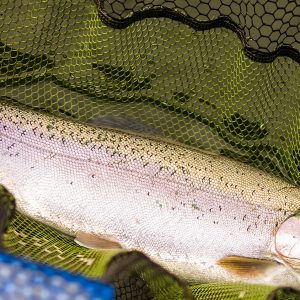 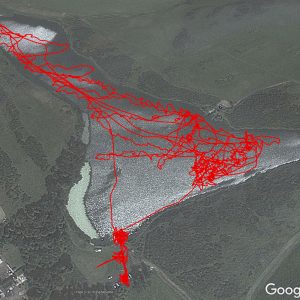