This was a real ‘four seasons in one day’ kind of a day… in fact, at times it was four seasons in one hour.  When it was nice, it was very pleasant, and when it wasn’t, it wasn’t.  We started out in a stiff westerly, but by the time we worked our way up to the top end, it was almost flat calm.  The wind came and went after that.  The boat that Dougie Skedd and I had was a Coulam, instead of one of the usual Sweeney boats.  I know Dougie is not a fan of Coulams, but I was never really aware of how bad they can be until Saturday.  It was a contender for the worst boat I’ve ever fished from.  It would not keep a straight line, with or without a drogue.  On many occasions it turned itself through 180 degrees with the drogue out.  I still don’t know how that is even possible?  To make matters worse, our engine had various broken bits, requiring us to run it all day with the cover off, so we could hold the bits together that were required for it to start.  And then there was the problem that every time you opened the throttle to more than tick-over, it stalled.  It took about 10 attempts plus molly-coddling every time we wanted to go anywhere with it.

With all this palaver, Dougie and I found it difficult to get settled.  We started in Burnhouse, pulling on fast sinkers.  We saw fish, and had some chances.  Dougie landed a rainbow on a black and green minkie.  We decided we should do better, and we went for a look further up.  In the calm at the top end, there was suddenly a window.  Buzzers were hatching and fish were rising well.  I put up the other rod with dries.  I think I got one cast in, before the wind got up, it started raining, and the fish disappeared.  We moved round into Carron Bay, where conditions were once again quite decent.  We could see quite a few boats twiddling and a few fish being caught.  I simply took the dries off, put some buzzers on, and had a twiddle myself.  That produced a rainbow and a good brownie.  Dougie had a good brown on a snatcher.  Again, we felt we should be doing better.  We worked our way back down, having a look in at Binns Bay.  That was swirly and devoid of life, save for a brownie to the buzzers.  We went back round to Burnhouse, which had got quite busy.  Lots of folk twiddling and others pulling for Scotland.  Suddenly there was a dose of rising fish, including an impressive number of big jaggy tails showing.  Still plenty buzzers coming off.  But, before we could even think about doing something with them, the weather shifted yet again, and the fish disappeared.  I picked up 2 rainbows and a brown to the buzzers, while Dougie, seeing fish rising tight to his inside line, put up dries on the other rod and cast to and caught a decent brownie, and then a rainbow.

Still we felt we were not doing as well as we should have been.  As time was running out, I changed the pulling rod to a fast glass, put on some mini-lures and straight away had a couple of chances on the lift and hang.  Dougie went back to pulling on the fast sink and had two late rainbows to the minkie.

While we thought we had struggled for 6 apiece, there were a lot of 1s and 2s in the club’s catch returns.  Meanwhile, the guys who had cracked it, really cracked it.  Keith Logan (sharing a boat with a member of another club) had 12 rainbows and 3 browns, fishing a DI-5, with black and chartreuse dabblers, and a mini shuggie on the tail.  Keith fished the Road Shore, plus Carron, Binns and 30-minute bays.  That made a total of 35 fish for 9 rods.  All of which left one boat – Jimmy McBride and Davie Tyrie.  They had 42 fish between them – 12 browns and 30 rainbows!  Both fished a washing-line set-up of cormorants and buzzers on a midge-tip, slow figure-of-eighting, in Carron Bay.

So, with a rather skewed distribution curve, the club’s 11 rods caught 77 fish.

While we were in Carron Bay, an osprey flew over, and as I watched him, I could see he was sizing-up to have a dive at a fish.  He went behind us, and I picked up the camera and twisted round as best I could to get it on him.  I had to go with the settings it was on – which was for “trout in play”.  This wasn’t ideal, as the settings for the autofocus are set to high sensitivity for anything new entering the frame (such as a trout breaking the surface).  This meant as soon as he dived in front of the trees the camera refocused on the trees!  So, I lost a few frames there.  He clearly nailed a good-sized fish, and he struggled for a minute or so, trying to get airborne with it.  We saw one at Frandy last year that had to give up on the fish it grabbed, as it was just too heavy.  They obviously are not built to deal with cormorant-proof stockie rainbows!  Eventually he managed to get airborne and made off with his tea.  The photos I got are here… OSPREY DIVING 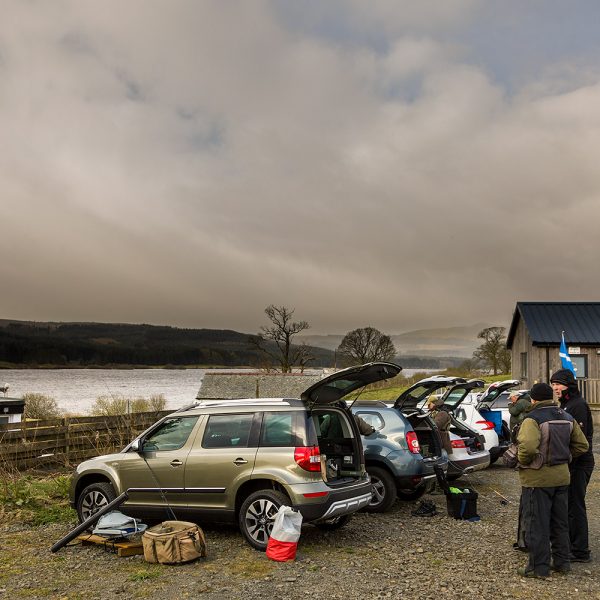 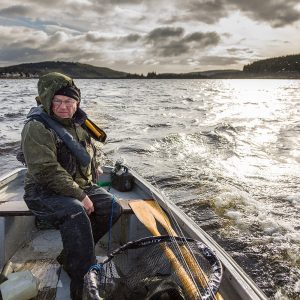 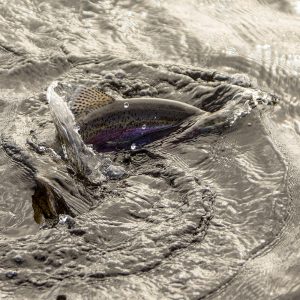 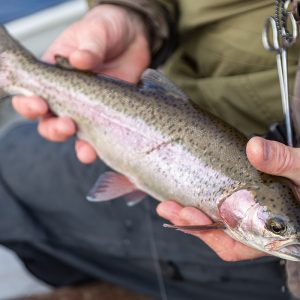 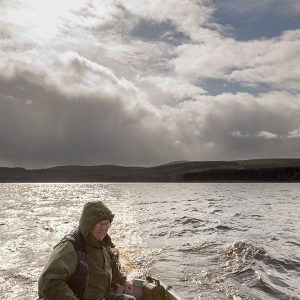 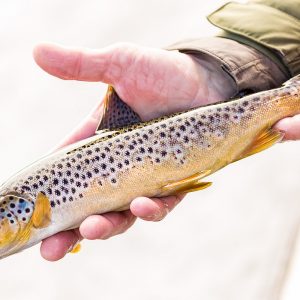 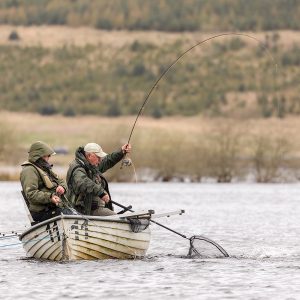 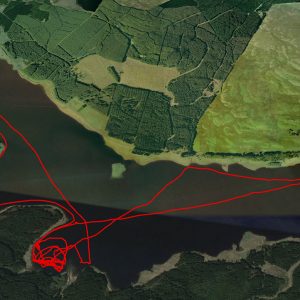