Another July club outing and another episode of Scotland the Dreich.  Hard to imagine that only two days earlier I was sitting on top of the cairn at the summit of Lamer Law in 26 degrees, with not a cloud in the skies, and having side-stepped a couple of adders on the way up, basking in the glorious sunshine.  The clouds were clearly gathering over the Black Loch, and it felt like the start of an evening session, rather than the morning.  What started as a balmy 14 quickly cooled with the rain and easterly gusts.  Another feature of our summer outings has been a lack of insects or terrestrials out on the water – and this was no exception.

There were a couple of last minute changes to our boat pairings which resulted in just 4 boats braving the elements.  For the first time this season, I was in the boat with Jimmy McBride, which inevitably leads to a good fun day.  Once again, the fishery had done a great job preparing the boats, and were quick with welcome advice.  Not surprisingly, Davie said fish weren’t deep and there was no need for anything more than a midge tip.  I wasn’t sure, since there was a decent wave out there and I would probably have settled on a 6ft ghost-tip.  However, fate made the decision for me, as a pre-prepared dry fly cast for the Lake rolled out my bag.  That was it then: shuttlecock, hopper, and olive half-hog – although, fair to say, I could have been easily persuaded otherwise on the way to the boat.

Jimmy boarded, armed with some new toys in the shape of two shiny new Wychwood rods, one a 4-weight with a feather-down floater and a more agricultural 7-wt, if the dries did not work.  I was looking forward to seeing how this 4wt would cope with the quality of fish that are patrolling the Black Loch.  Most of the boats headed up towards Dam Bay and Heather Hills, and a couple motored over to South Reedy Bay.  Jimmy opened with a four-fly combination of dries and nymphs.  I have discovered over the years not to try and replicate the big man’s approach – it is pointless.  Jimmy likes to control his flies with relatively short casts, just fanning the water and not leaving them swimming for long, interspersed with a wee tweak now and again.  It’s a bit more scientific than my ‘chuck it out and hope’ approach.

We headed towards School Bay, at the top of the wind among the calmer waters.  Not long into our first drift, a fish splashed at one of my dries but did not connect.  Not to be outdone, Jimmy had interest from a couple of fish close to the jetty, but again no solid hook up.  Jimmy was chopping and changing tactics, but nothing was really happening,  I persevered with the dries, and landed one fish that thankfully hooked itself – those are the ones I like.  I then proceeded to lose another, along reedy Bay.  Jimmy then opened his account to a flashback Diawl Bach and then another soon after.

We then employed our drogue to give us a bit more control.  A lot of boats by this time had set anchor, so it was not easy to navigate in certain areas in Dam Bay.  Nevertheless, we both managed to pick up the odd fish, though we were not converting many of the takes.  I think the changing weather and atmospherics are probably not ideal for the fish or indeed us anglers.  We managed a couple in the open water out from the Heathery Hills.  Jimmy was getting a fair bit of interest to his CDC on the point.  The fly floats like an aircraft carrier (much CDC), but it’s very effective too.  I had given up the ghost with the dries and switched to washing line, and finally I landed a few more to cruncher and orange-headed Diawl.

We bumped into John Miller and Bryan Griffiths out by the Road Shore.  Bryan had a great outing this time last season with a dry Greenwells Glory – remember them!! – and mentioned they’d seen a couple of trout moving close in.  That was enough encouragement for me – back on with the dries, and again almost immediately a case of close but no cigar.  I managed another to a heather fly, and had the big man in sight, only for Jimmy to land another couple of good fish on his 4-wt, which tested the flexibility of the rod to the max.  Final tally: Jimmy landed 8 to my 6, which by all accounts was a reasonable return.  My final observation is the 4-wt is a great fun rod and perfect for the brownies, but would not be at all confident with a big angry rainbow.

The best among the other boats was 3 by John Miller, who fished a washing line and took 3 to the coral booby on the tail.  Everyone else was either one or two fish. 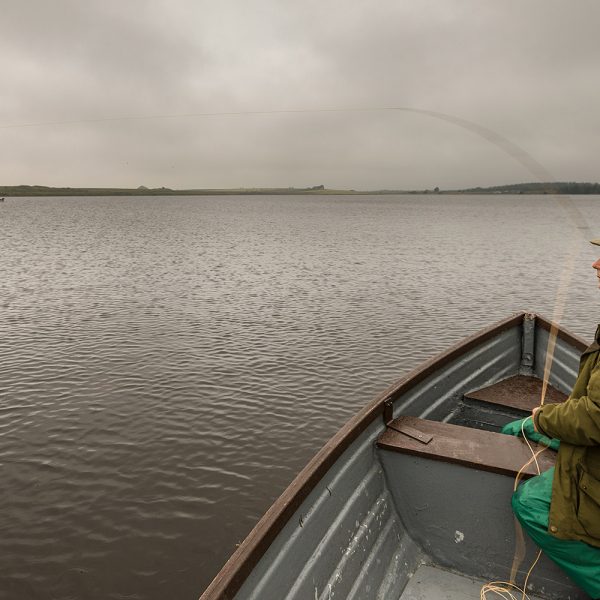 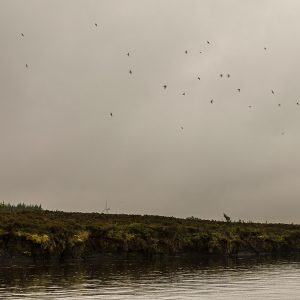 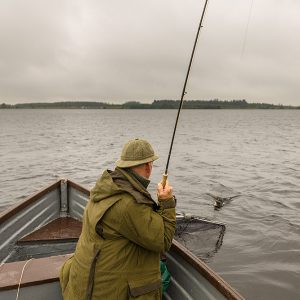 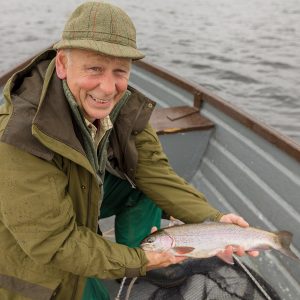 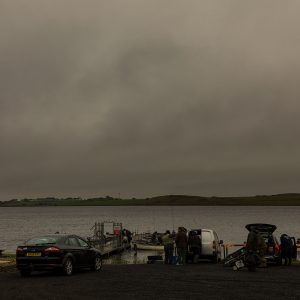