Our outing to Frandy was not one of our best – the weather looked OK even though it was a bit bright, the wind was not very strong but was blowing from a few directions at the same time, and the air was colder than the water. However, hope springs eternal, so on went the dries.   I was fishing with Gary Heseltine, and am sure that I offended him by persisting in calling him Gerry!  In my defence, I had spent two days with my banjo-playing friend Gerry O’Connor and he, like me, is fond of a G&T, so perhaps I was still a wee bit fuddled.  Gerry, or Gary and I, started at the right hand corner of the dam, but the swirling wind was such that we could not hold position or get a decent drift, so we moved to the north shore.  Gary went with a sinking line and I stuck with the dries and after a long time landed a brown trout of about a pound.  It was a nice plump fish, with a golden belly and big red spots.  When we came off the water, Ken advised me that Frandy now stocks more brownies than ever before.

John Miller had a good day – he landed three nice brownies – one on a size 14 black hopper one on a fiery brown Bob’s bits size 12, and one on a wee yellow-bodied daddy.  In addition, his fish were caught all over the loch.

Dougie Goddard had two rainbows – one on a claret shipman’s and the other on a yellow blob.  A strange combination, but it worked for Dougie at the top end of the water. John Levy had a brown and a rainbow, both caught on dries at the heathery bank. Trevor Gibson, Robert Wallace and Allan Brown did as badly as I – they had one each, but on the day one fish was a fair return – had to say this as I only had one.  Our best boat by far was the two David’s – Bertram and Tyrie. Both used floaters and yellow owls, fished static in the deep water at the left hand side of the dam – this tactic got them six fish each. 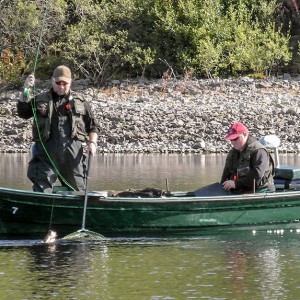 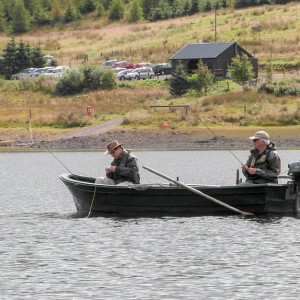