I was fishing with guest, Mike Mackenzie.  Mike suggested starting at the Malling shore, so we headed up to see what was doing.  About 10 boats had decided likewise, though the area was big enough to take it – spreading from the plantation across to the reeds beyond Dog Isle.

Mike was set up with cormorants on an intermediate, and I had only set up a rod with dries before heading out, intending to set up a second rod with, er… something else.  I thought I may as well have a go with the dries to see if it would do.  I had gone with a daddy on the tail, a heather fly on the middle and an Adams Klink on the bob, to give my failing eyes a sighter with the fluorescent wing post.  Half way down our first drift, a fish ever… so… s…l…o…w…l…y… head-and-tailed the Klink.  I lifted to meet the resistance of a fit blue that led me a merry dance before coming to the net.  A bit further down the drift a perfect repeat occurred, except for the fact the fish jumped and opened the hook out on me.  With no meat on the water apart from a few tumbling daddies, I replaced the heather fly with a black Klink.

Meanwhile, Mike latched into a lump of a fish on his cormorants.  It took a lot of subduing, but eventually come into the boat.  We reckoned it was in the 6-7 lb class.  Mike added another, smaller fish soon after.

Back at the dries, the next couple of fish came to the black Klink.  Again, the takes were so slooooooooowww, you had to steal yourself not to lift too soon.  We were seeing tumbling daddies, and having brought the dapping rod with me – still determined to get a fish on the dap on a club outing – I was looking for telltale signs of splashy rises to give me the incentive to put the dap up, but we didn’t see one, the whole day.  In fact, we hardly saw a rise the whole afternoon.  Despite there being no signs of fish hitting the tumbling daddies, the next 2 fish took the static daddy on the tail of my cast.

With the dries working reasonably well, Mike changed over to dries, but that seemed to put the kibosh on things, and it all went very quiet for us.  we were still seeing the other boats catching, so we tried some other tactics.  I put up a midge tip and snatchers, which initially did nothing.  However, a couple of times fish came at us when we were inadvertently moving the flies fast, so, as I cast, I said to Mike, “I am going to try stri…” I was going to say try stripping fast, but the very first pull I made was hit by a fish, which smacked my hare’s ear snatcher before going ape-shit.  Mike tried similar and was also straight onto one.  Bingo – we thought we had cracked it.  I changed my snatchers for a team of trads and gave them a good old tug.  All we did now was get follows!

I went back to dries and we took a look across at Dog Isle.  We were into the last hour and the wind was fining away.  Finally, one of two fish were rising, and a couple of chances were missed from them.  I had a go twitching a stimulator, and got a grip of a fish right at the death.  We really could have done with an extra hour.

The club had some cracking catches – ours was very average.  Guest Jimmy McBride was top rod with 15.  Jimmy fished an Airflo mini-tip, figure-of-eighting a sunburst cat booby and black and pearl Diawl Bachs over the western half of the water.

Next best rod was Alec Ramsey, with 12.  I hope I have got the method correct here… Alec used a floating line and a goldhead dancer on the point, with 2 daddies on the droppers, letting the dancer pull the daddies under, before lifting them back up… I think.  Trevor was fishing with Alec, and he had his fish on dries.  It’s the end of the world as we know it!

An evenly matched boat was Dougie Skedd and Derek Kilgour, who took 7 each on dries, mostly hoppers, taking them at all points on the water.  Another boat of 7 apiece was John Miller and guest Alan Brown.  They fished nymphs and trads on floating lines at the Malling shore.

The last 3 boats registered 12, 11 and 11.  John Levy and Bob Allan did the Fab/Diawl Bach combo at Gateside.  Kenneth Cockburn and Gary Wright fished cormorants and trads at Malling shore to Sandy Bay.  Adrian Coats and Alan Duncan mixed it up with dries (F) and cormorants (I) in the western half of the water. 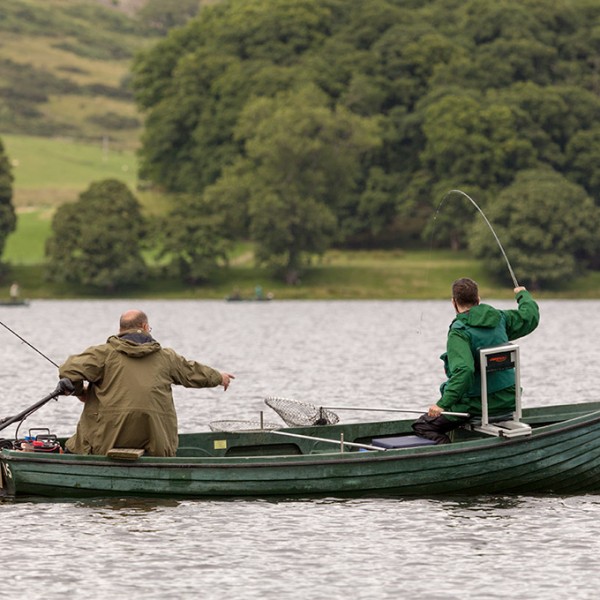 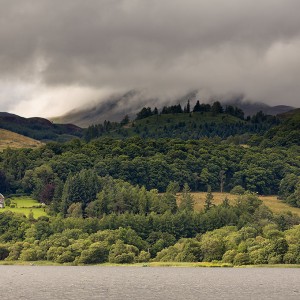 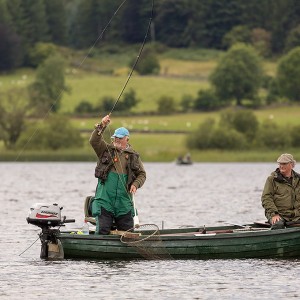 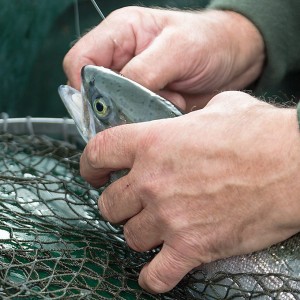 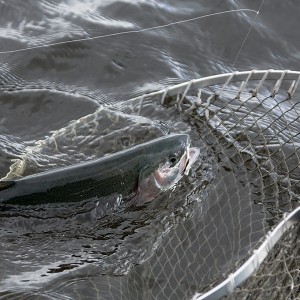 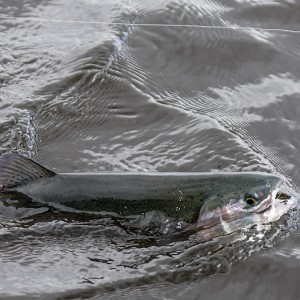 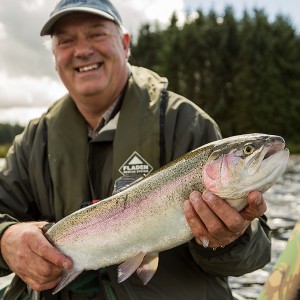 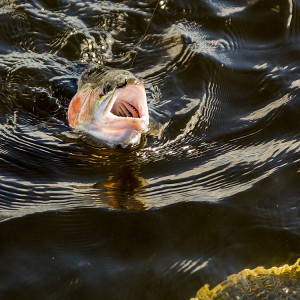 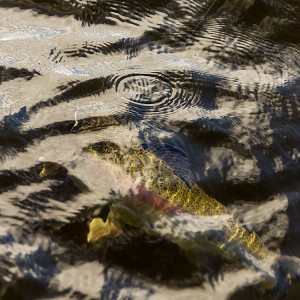 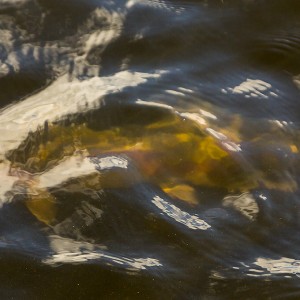 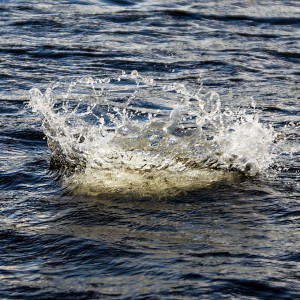 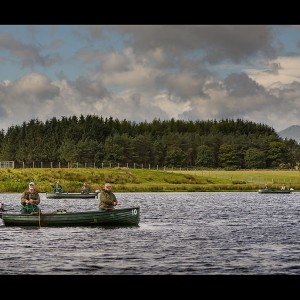 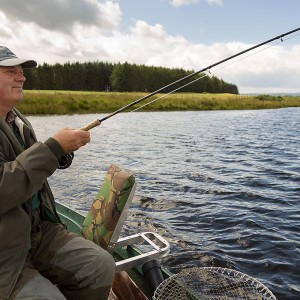 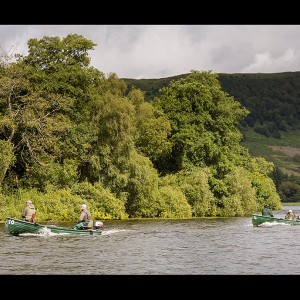