Our third outing this year and it was without a doubt the best one yet – No thick snow, no iced over water and when we arrived, a few fish were rising.

I was talking to a chap who was of the opinion that weather forecasters were all procrastinators born from unmarried mothers – and on Sunday the 7th of April the weather forecasters did nothing to dispel this opinion.  A daytime temperature of 8°C, a very light wind from the South East and no rain they said – and what did we get – Smirr that lasted most of the day – the water was 4°C, the air was 3°C and the cold wind from the East almost required the use of a drogue.

Peter and Euan Cluness had a very unfortunate incident on the way to Coldingham. A hare ran in front of the car and took off Euan’s front number plate before going under the car.  However, somehow it got up inside and jammed behind the grille and against the car radiator.  Amazinigly, it was still very much alive!  It was stuck so hard that it could not be got out without dismantling some of the car bodywork.  Alex Ramsay and Gareth did some sterling work with spanners and eventually got the beast out.  (Needless to say, it was beyond help, and was quickly dispatched.)

So, how did the fishing go on this cold day? Well, I was fishing with Derek Kilgour, and on seeing the few rising fish we were both tempted to start with dries, but being sensible chaps we opted for lines that would put our flies down two or three feet.  This proved to be a mistake, a mistake that Derek quickly corrected – on went his floater and a wee CDC olive – first cast, a fish. After I got over the shock I also went onto dries, two CDC loop wings one a 14 the other a sixteen – and I am chuffed to say that I had my first fish of the season on a wee CDC loop wing.  A fish about three pounds and it was fin perfect – a great way to start the season.

After that, the wind swung further to the east and got up a bit.  This dropped the temperature and the rising fish were gone – so back to wets but still on a floater.  We found the fish tight to the reeds at the top of the west arm, landing a further 15 between us. At about three o’clock, everything went dead, so we upped sticks and fled to the south end of the loch.  Looking for a bit of shelter, which we did not get.  We then hatched the cunning plan of nipping into the fishing hut for a hot cup of something. When we arrived, Gareth had the kettle on and we quickly had two cups of hot coffee wrapped in our hands.  This revived us and talk of fish rising on the west bank had us again heading for the boat and tying on dries again. Just past the point on the west bank, we found a slick that had moving fish and we spent the last forty five minutes fishing this slick. Derek had a few more fish and I landed another, caught on a claret emerger, I put this on, as I had no idea what the fish were rising at – I could see nothing.

So how did the other members fare?  Most of the fish were caught from the same tight concentration against the reeds at the top of the west arm, where 3 other boats managed to get a berth while the going was good.  Bob Allan and Peter Cluness were in one boat, fishing Diawl Bachs.  Stewart Barnes, was in another, fishing with Euan Cluness.  They ended up with 15 between them, mostly to cats whisker and damsels.  The 4th boat comprised David Tyrie and Bob Whyte.  David fished DI3, a damsel and an inky pinkie (no I do not know what an inky pinkie is). Bob used an intermediate line – Damselfly, Kate McLaren (which is no surprise for Bob) and a cats whisker.  This was our best pairing with 24 fish to the boat.

The boats that fished elsewhere struggled to find fish, with the notable exception of Alex Ramsay, who used a DI3 and yellow dancers to land eight fish.

The fish that I saw were nice strong fish with full fins. In addition, on such a cold day I think the club did very well.  14 members netted 76 fish, 73 of which were returned. Our rod average was 5.43.  Very good day considering the conditions. 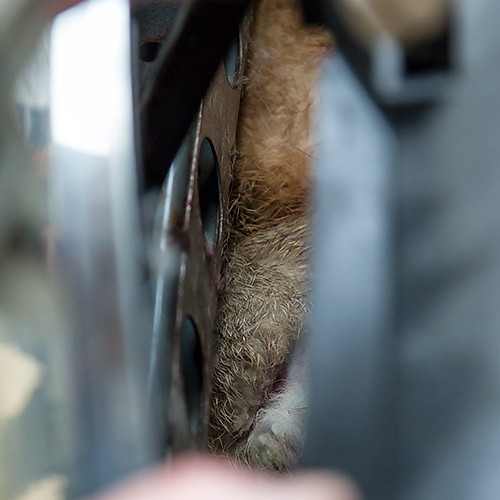 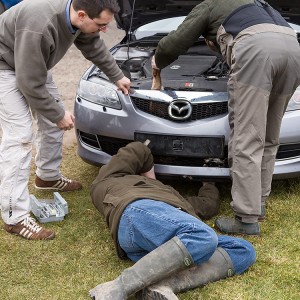 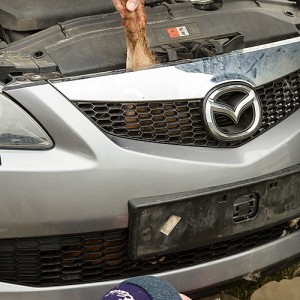 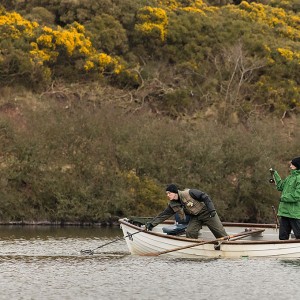 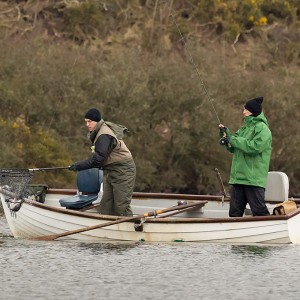 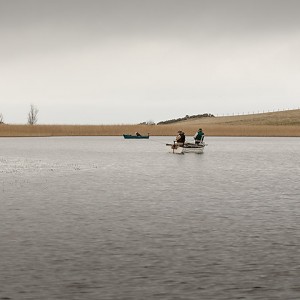 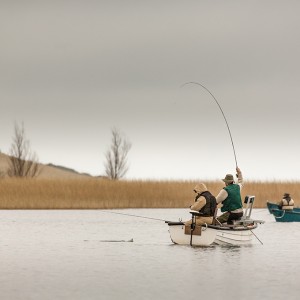 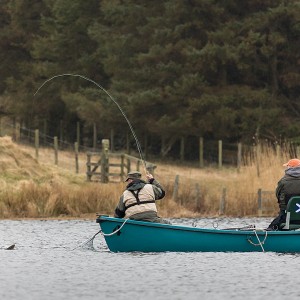 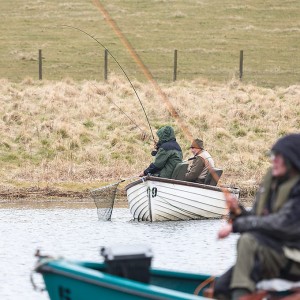