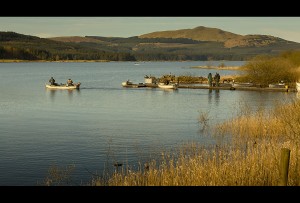 Ochone  ochone – another cancellation.  This time the fishery had made an administrative error, I was very tempted to use unparliamentary language – but it would not have helped.  The fishery staff could not have been more apologetic and I know that the apology was genuine.  Even though we had made the bookings before any of the other clubs fishing we were the last to book in and all the boats had been allocated before I spoke to the staff, in fact, I stood and watched as Jimmy filled in the sheets and handed them out to the waiting fishers.  I was waiting for him to start writing the sheet for Heriot’s but he never did.  I, standing like a spare chap at a wedding was then asked if I could be helped  – when I said I was waiting for him to fill out the sheet for Heriot’s the truth began to dawn – no boats were left.

What had happened was I had booked the outing in March 2013, Carron confirmed the booking but the person (who has now been replaced) doing the booking did not mark the booking into the 2014 diary.  I have agreed with Jimmy that we will still make our bookings early but that I will confirm them early in the next year.  This will stop this from recurring.

Although initially I was angry when I discovered that we could not go out, the anger quickly changed to disappointment – this was due to the response by Jimmy.  I am convinced he was more perturbed by what had happened than I was.  What surprised me more was the response shown by the club members that were waiting to be given boat numbers – everyone accepted the situation with humour. Then very quickly made other arrangements for a day’s fishing.

I have now reached the stage when I can look at the situation and think it is only when a problem occurs that you can learn a lot by another person’s response to a problem; Jimmy Coyne’s response was everything that one could hope for.  In addition, I congratulate and thank him for his handling of the situation.

We now look forward to our outing on Carron on 25th May – with luck it will not be as bright as on the 19th and we can all chase brownies in Carron Bay.