On a nice sunny morning, the drive through to Linlithgow was pleasant, but not very promising, and when I arrived I found that Derek Kilgour had beat me to it and was busy contemplating the brassy blue sky as he huddled from the NNW wind – not a strong wind but cold.

We were advised that brown buzzers and diawl bachs had been catching fish over the previous few days – so some of the members started out with that.

Bob Whyte and I shared a boat – starting out in town bay we tackled up with floaters and buzzers, everyone catches on buzzers at Linlithgow – don’t they. We then did all of the correct things – long casts, a good pull to straighten everything out, allow the flies to sink – then do nothing for a while before some slow pulls to lift the flies, stopping again to allow them to sink, then a very slow figure of 8 with some long stops. After a long time at this, we knew we were not going to catch in this spot with this method. We then moved about ten yards and repeated the process. At this stage, we recorded the temperatures; the air and water were both 10C. I decided that the fish must be down a wee bit so on went a SSI – nothing – on went an intermediate – nothing – on went a slow sinker – yes you have guessed it – nothing. Then Bob had the sense to suggest a move, we headed to hatchery bay – when we arrived two bank anglers were close to the point that leads into the bay, and a boat was anchored about three casts out from them, in the very spot that Bob had suggested we fish. We anchored a few casts to the west of them and watched as they pulled out fish after fish, it was far too bright to see what lines or flies they were using but it was something different from the stuff I was using. Bob was using an intermediate line and as ever had a green-tailed Kate on his cast and with this the first fish came to the boat – a good overwintered fish. He then got another on the same line and an olive damsel.

After this excitement another long spell of nothing arrived – another move was called for, so we went to the east end of hatchery bay – Bob got another very good fish using a floater and a standard diawl bach. At this location, using a midge tip line and diawl bachs I foul hooked two in the mouth.

Alex Ramsay, fishing with Stewart Barnes, used a Hi-D and yellow dancer to catch four fish – Stewart, well let us say the pair had four fish in the boatAdrian Coats was fishing with Alasdair McKechnie and they had two fish in the boat – Adrian using a DI3 caught local to the sailing boat dock below the north face of the castle.

Eric Singer – using a floater and a cat, had three fish from the north shore his boat partner John Miller also used a floater he had three in town bay – two to black buzzers and one on a cat.

Trevor Gibson using a floater and buzzers had three fish – his partner Ken Hastings had two.

David Tyrie using blobs and a DI3 was pulling, he had four fish – his partner John Levy used a floater had two fish to the FAB. This pair moved all over the loch and did not catch in any particular place.

David Bertram was fishing with Derek Kilgour – But David had to go home early, as he wanted to look at some kickball game. Derek started with a floater and had three on a flashback melanistic PTN he then changed to a DI7 coupled with blobs and boobies this got him another five fish – and he lost at least eight fish – in four casts he hooked, played and lost four fish.

No prize for guessing who gets the most points.

Roll on Carron on the 21st April. 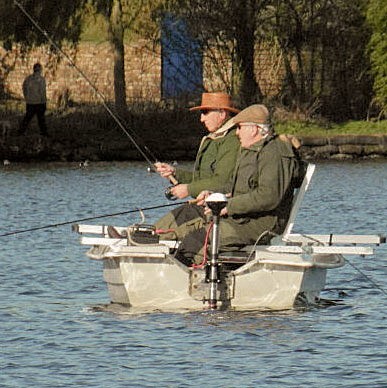 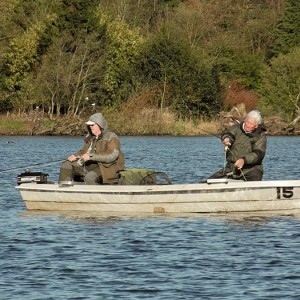 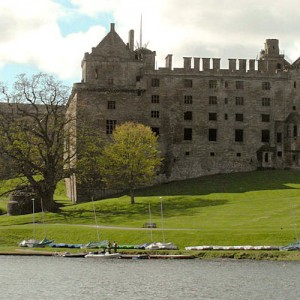 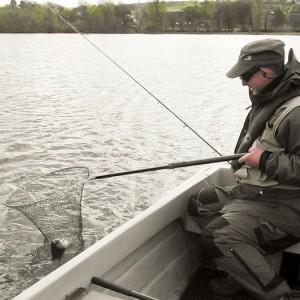 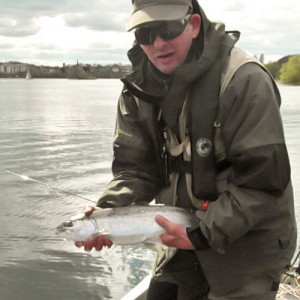