The weather was just grand for gardening on the Sunday morning of our first outing of the season, bright blue sky and a light wind from the south-west; mind you, the wind had a very cold edge to it. The air temperature was only 3.5 centigrade at the start.  However, it was still super to get out on the water again.  I should thank Allan Brown for loading all my gear onto the boat and he even fitted my motor.

Eric Singer and I set out and we had decided to start half way along the north shore, the mistake, which we only recognised later was to start with me on a midge tip and Eric on a floater.  Not only did we catch nothing we did not even get a pull before lunchtime.  A bit of good news though, when I was looking in my fishing bag for another fly box I came across a flask and two glasses, so Eric and I had a wee taste of some sloe gin, just to see that it was still OK, and it was, so we decided to have an aperitif prior to lunch.

This was a good idea, because when nibbling on a lump of cheese it dawned on me that going down a bit might be a good idea.  Eric tied on a gold head and I put on a fast intermediate and kept the same flies on, a Kate kind of thing.  Picture a Kate, but with a yellow ice yarn body.  It worked a treat.  I landed three fish and lost a few next to the boat.  (I am not going to admit that we had forgotten to take out a net!)  Eric boated two nice fish and all the fish we caught were fin perfect.

Bob Whyte netted seven fish; he used a DI3, a size 10 black marabou lure with slow pulls.  All his fish were caught along the north shore.  Gary Heseltine had four using an intermediate line and black & green tadpoles.  His boat partner, David Tyrie, also had four.  He used a fast glass line, a green and black cat and a slow fig-of-8.  This pair fished the east bay area.

Trevor fished the north shore and had four fish on Diawl Bachs.  He used a floater and a slow fig-of-8.

Bob Allan and John Miller were fishing together along the north shore.  Bob used a DI-3, Diawl Bachs and a red blob, and a slow retrieve.  This got him five fish.  John used an intermediate line, an orange blob and an orange gold-head tadpole.  This, with a slow retrieve, got him four fish.

Brian Griffiths fished the north shore and he had two fish using a DI-3, a viva, cormorants and a slow retrieve.

Our best rod was Derek Kilgour, who used a DI-7 and an ace of spades, which was pulled through the water rather quickly.  Derek was drifting the north shore.

Mid way through the day, the air went up to about 11°C and the water temperature was 5.5°C at best.

The secret seemed to be the north shore, a DI-3 with black and green flies, pulled slowly.

It’s the Lake on 26th March, the reports are that the Lake is fishing well. 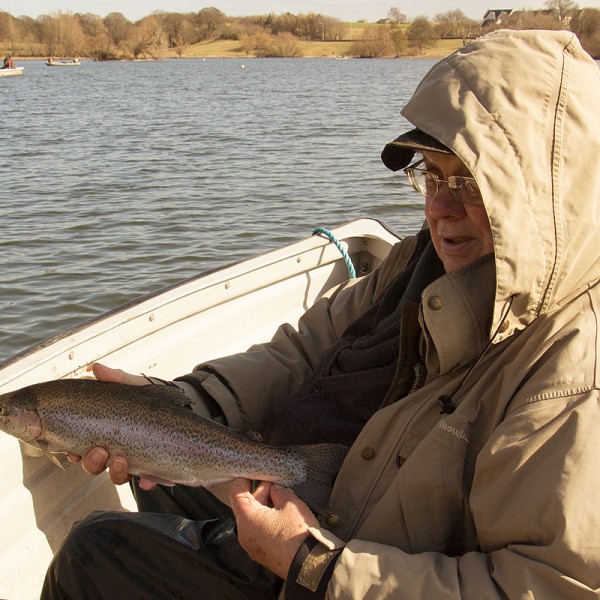 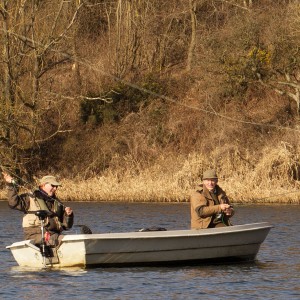